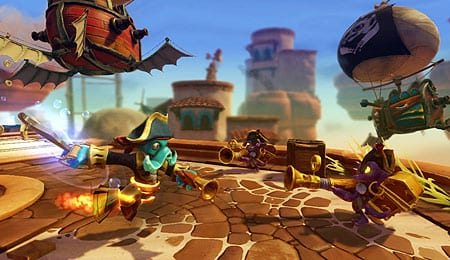 Fire and Water!?!? These SWAP Force guys so crazy…

When it comes to innovation and sustainability, it’s hard not to rank Activision’s Skylanders right near the top. Slickly combining action figures and video games, the series is aimed squarely at the hearts of children — and the wallets of adults that can’t help but add to their children’s collections. The latest iteration, Skylanders SWAP Force, introduces a new concept to the familiar setup as Skylanders can now swap tops and bottoms, allowing for lots of unique combinations.

Two issues stuck with me during my time with SWAP Force. First, I thought it was odd that the basic functions of the face buttons differed between Skylanders; for example, with one I might press “Y” to do my evasive move, while with another “Y” would fire a projectile and “B” was used to evade. As I was only utilizing the three characters that came packed with the game it wasn’t a big deal, but I would think as your collection grows it could be annoying, especially for younger gamers.

Secondly, I found the basic movement speed to be incredibly slow. It almost seems like you’re knee deep in muck the way you plod through the world. My workaround was to constantly use the evasive moves to cover ground more quickly. To be honest, I’m not sure if it really worked or if it was just my perception. Either way, it was easily the biggest flaw with playing SWAP Force.

Bright, colourful and cleverly designed, Skylanders is a consistently pleasant looking game. The locations offer a nice variety, and, of course, there is seemingly no end to the available Skylanders that you can pick up to supplement your collection. Enemy diversity is respectable, though I certainly felt like a lot of them were basically re-skinned versions of one another. The static camera can cause frustration now and then as well. Still, it’s hard not to get drawn into this perpetually adorable world.

On the audio half a passable but utterly forgettable soundtrack is accompanied by another strong showing from the voice actors. And while the dialogue may not be Pixar caliber, the writing is clever enough to make the game enjoyable to children and adults alike. On the downside, there is too much repetition amid the in-game banter from the Skylanders themselves.

As with the previous games, SWAP Force has the Skylanders defending the world against the plans of the evil Kaos (with unwanted aid from his mother and, of course, Glumshanks). Once again you fill the role of Portal Master, and it’s your duty to thwart Kaos’ plot by unleashing your assemblage of Skylanders to defeat his minions. The story is little more than a loose thread played for chuckles that provides motivation to visit the game’s various locales. Viewed in that light, it works as intended.

Most of the action here is of the button mash variety as you’ll wade through lots of underpowered foes with the occasional need to dodge projectiles or tackle pattern-based enemies… for instance, some are shielded and can only be damaged after they’ve missed an attack of their own. Even on the higher difficulties it’s very forgiving and clearly geared toward younger audiences.

Defeating enemies will net you both experience and coinage, both of which are specific to the Skylander you’re controlling at the time. Each level you gain makes your character stronger, while money is used to purchase new abilities as well as passive buffs via equipped hats and treasures. Hats are worn by the individual Skylanders, while treasure is placed on pedestals in Woodbury, which serves as the hub world. In addition to leveling up your Skylanders, you also progress as a Portal Master by earning stars — the more stars you have the more pedestals you can activate.

New to this installment are the game’s SWAP Force namesakes. These Skylanders allow you to freely swap their top and bottom sections, letting you deploy various combinations. The top section is one of the game’s usual elements (air, earth, water, etc.) while the bottom is an ability, such as being able to fly, climb or dig among other activities. Once again, some sections of the campaign are only accessible by Skylanders possessing specific abilities — to be clear, you can finish the story mode no matter which one(s) you have, but to see it all you’ll need to invest in more Skylanders.

Therein lies the game’s genius, and the source of justified parental angst. The starter kit retails for a cool US$75, and each of the new swappable characters will set you back US$15. There are 16 new ones, two of which are included in the starter pack, so if you were to buy all 14 you’re talking about going north of US$300 when you factor in sales tax. That’s quite an investment. On the plus side, Skylanders from the first two games will still work, however, you will need the new starter pack’s portal.

Beyond the financial angle, my other issue with SWAP Force is that none of the tacked on mini games are particularly enjoyable. They’re not bad in the context of the story mode, but I was never compelled to revisit them even after they showed up as available activities in Woodbury.

At least there is quite a bit of content even after finishing the game. A series of bonus missions can be found or purchased using in-game currency, and both score and time attack modes unlock once you’ve completed the campaign. There’s also a survival arena that can be played alone or co-operatively.

As an adult, some of the initial luster has started to wear off with Skylanders SWAP Force, though I still can’t help but marvel at its sheer marketing genius. It’s a fun game that does a nice job straddling the line between appealing to kids and keeping adults engaged. If you have little ones or are a fan of the series, SWAP Force is worth getting.

By Herija Green
Tags: Activision
This entry was posted on Wednesday, November 6th, 2013 at 9:19 am and is filed under Herija Green, Video Game Reviews. You can follow any responses to this entry through the RSS 2.0 feed. Both comments and pings are currently closed.