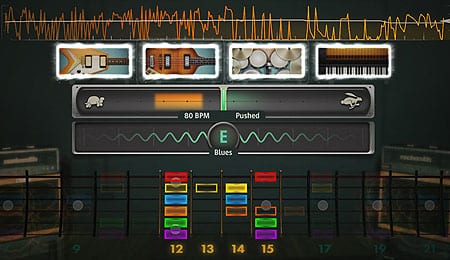 [Technical note: I used Rocksmith’s packed-in 1/4″-to-USB plug on a 1997 Fender Standard Strat. Audio is hooked up from the PS3’s HDMI to the TV, then the TV to a Sony surround speaker bar with subwoofer via optical cable. I experienced no lag, though I know it’s a concern for this game and Ubisoft has included instructions for alternative analog setups.]

The original Rocksmith came out during the dying era of music rhythm games, but it stood with its ability to use a real guitar with the goal of being a fun teaching tool. With Rocksmith 2014, the game didn’t just receive a sequel, it’s a full-blown overhaul. There’s a little something for everyone regardless of experience or skill.

Rocksmith’s controls really break down into two areas: using the standard controller for menu navigation and configuration, then playing guitar strings to work with your game mode. The primary concern is lag, and that’s going to vary for a lot of people based on the setup of their sound system. I had no problems with that, and because of that, the controls were perfectly functional. My only real beef with the controls was that configuration of pedal setups moved too slowly with simple left-right sliders, and it might have been better if the analog stick worked in conjunction with a virtual 360 degree knob on screen.

There’s really not a lot going on visually with Rocksmith. It is, in the end, a mash-up of teaching tool and music game, so it’s a little all over the map. There’s the familiar vertically scrolling notes and menus with song selection. Rocksmith’s many other features are catered visually to their needs — the arcade uses retro-style arcade graphics to get you to practice certain techniques while demo videos are just that.

In short, it’s all very functional, but lively enough to prevent it from feeling too instructional. I do have a gripe about the way the notes scroll, but I’ll leave that for the gameplay section.

You can learn a lot in Rocksmith. There are instructional videos, mini-games, slowed-down practice sessions, a built-in custom jam session that somewhat customizes based on your pace and play. But for the most part, it centres around playing scrolling notes on your guitar, and that’s my biggest gripe with the package.

Tablature is the de facto language of guitar sheet music. It’s a left-to-right language that features six lines to represent each string and a number on each line that represents the fret to hold down. Every guitar player learns this, and you’ll find plenty of homemade ASCII versions available on online archives. Rocksmith, however, doesn’t teach you to read this. In its default setup, the vertical scrolling notes are set up with strings inverted to traditional tabs, though there is an option to have them fit the string format of tabs.

This seems self-defeating to me. As an experienced guitar player, everything felt counter intuitive, which really limited my initial enjoyment of the game. However, since Rocksmith is supposed to be a teaching tool, wouldn’t it make sense to teach new guitarists how to read the most universal language of guitar? I understand that the vertical scrolling format has been the mainstay of rhythm games for years and years, but it would make sense for Ubisoft to include an option that transitions the player into a traditional tab view at some point. Otherwise, you’re setting up new guitarists to learn music in two disparate systems: tabs and Rocksmith.

Outside of that, though, there are so many ways to use Rocksmith for both beginner and experienced guitarists. Standard gameplay can be used to learn your favourite songs across lead guitar, rhythm guitar, and bass, from beginner renditions to note-by-note transcriptions. Songs get progressively harder depending on your accuracy, and each song finishes with recommend “missions” to help complement your learning curve. Riff Repeater is an on-demand feature that lets you play a slowed-down version of a riff until you master it. Master Mode kicks in when you’re hitting every note and achieved the highest level of difficulty by fading out the note icons so you’re riding without training wheels.

In Session mode, you create an instant band across tons of options: pick four instruments of your choosing ranging in styles (e.g., drums vary from synth to acoustic, guitars vary from classical to metal), select a tempo and key, select a rhythm style, etc. This is a great way to practice while having the feel of backing musicians, as the game speeds up/intensifies based on your own playing. My only suggestion for future iterations is to let players select chord progressions so that this mode can become a rough songwriting tool.

Rocksmith also allows you to build out your pedal/amp configurations, so techheads can experiment with all different types of sound setups. A long list of lessons provides in-depth video followed by gameplay evaluation. Mini-games use arcade-style movements (e.g., only using harmonics to move the arcade game’s character) to build up your experience with a specific technique. These are really more about getting your muscle memory to work with a technique, so don’t expect anything particularly musical about it.

In short, there’s a whole heck of a lot to do, and most of it is great fun. However, there’s something about the experience that makes it feel very mechanical. It’s teaching you to hit strings at the right time, along with approaching new techniques, but it doesn’t bring much to the table in terms of understanding musical nuances or songwriting. Because of that, Rocksmith is more of a fantastic practice/reference tool but not a true replacement for a real-life teacher.

Rocksmith 2014 isn’t quite a game and isn’t quite a teacher — it’s somewhere in between but it brings together a pretty immense package that will delight new and experienced guitar players alike. However, many of the modes feel like they could use just a little tweaking to take them from good to great. It’s hard to argue with the menu of options, though, and it’s a hell of a lot more interesting than just practicing on your own.

By Mike Chen
Tags: Rocksmith
This entry was posted on Monday, November 4th, 2013 at 6:23 pm and is filed under Mike Chen, Video Game Reviews. You can follow any responses to this entry through the RSS 2.0 feed. Both comments and pings are currently closed.