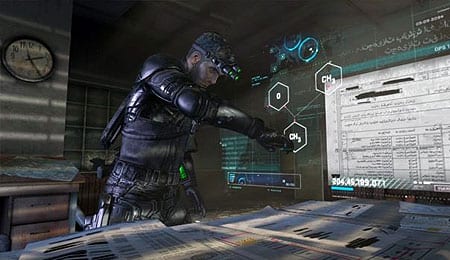 Walter White is not impressed by Sam’s chemistry skills.

When it comes to stealth action, I’ve long believed gamers fall into one of two categories: either they’re fans of Splinter Cell or Metal Gear. It’s like Coke or Pepsi — a lot of people will drink both, but everyone has their favourite. So with all due respect to Snake, I’ve always been a Sam Fisher guy, which means I’ve been eagerly anticipating Blacklist, the first new Splinter Cell game since 2010’s Conviction. My multi-vision goggles are prepped, and it’s time to find out if it was worth the wait.

While not as action oriented as Conviction, Blacklist manages to carry forward some of that game’s concepts while re-indoctrinating the series’ stealth elements. It’s somewhat similar to what Square-Enix did with Hitman Absolution, but there it seemed like various approaches were more viable. Here the clear focus is on stealth — whether that be avoiding entirely or quietly eliminating targets — with “going loud” in any extended encounter often leading to a reloaded checkpoint.

That has more to do with design than controls, though, as the over-the-shoulder aiming is responsive and the cover-to-cover system is effective (at least when staying out of sight). The almost cinematic “Mark and Execute” ability introduced in Conviction has returned, too. Getting a silent kill allows you to tag up to three enemies, and when the chevrons over their heads turn red you can put them down with the touch of a face button. It’s always fun. Always.

A handful of first-person action segments have been added to the campaign to go along with the online mercenaries, and those do a fine Call of Duty impersonation. They do feel somewhat out of place in the single-player action, coming across as generic when you’ve become accustomed to being a silent killing machine. Still, they handle fine in short doses.

As with Battlefield 3, Splinter Cell: Blacklist contains a hefty optional installation to give you a more detailed graphical experience. During levels there’s no doubt it’s very impressive. Sam moves fluidly through the various environments whether scrambling between cover, scaling a building or quietly killing an unsuspecting foe in delightfully judicious fashion. Outside of some occasionally wonky looking physics from the dearly departed, this a tight package visually.

Cut scenes are an odd duck, however, featuring a weird blend of good looking facial animations that are clearly motion capped — 24 fans will recognize Morris (AKA Carlo Rota) as Majid Sadiq — and a bizarre filter effect that makes everything seem like it’s rippling. I’m not sure how else to describe it. Suffice to say, it looks out of whack with the rest of the presentation.

Easily the biggest item of note on the audio side is that Michael Ironside, the longtime voice of Sam Fisher, has been replaced by Eric Johnson. Nearly 30 years Ironside’s junior, Johnson offers a more authentic sounding voice, though one with far less bass and personality. The rest of the cast do a decent-to-good job in their respective roles, and the soundtrack is solid.

Between the loss of Ironside and the aforementioned move back toward the series’ stealth-based roots, Splinter Cell: Blacklist seems like something of a reboot… not to the extent of Lara Croft earlier this year in Tomb Raider, but it still has that feel. In terms of story there’s nothing special here as another former special ops guy turned terrorist masterminds an anti-U.S. plot for nefarious purposes that aren’t what he claims they are. Sadiq is fine as a foil to Fisher, but he’s a cookie cutter villain to be sure.

Everything in Sam’s world revolves around his new mobile headquarters, the Paladin. This high-tech aircraft acts as your hub, allowing Sam to chat with his Fourth Echelon team members, purchase and equip new gear, upgrade the HQ and more. All available story missions, secondary quests obtained from your crew and even online multiplayer can be reached through a giant in-game map, which helps keep everything streamlined and reasonably cohesive.

In addition to the interface, the other aspect of Blacklist that ties things together is money. You earn cash across all modes for a litany of activities. Get X number of kills with a certain weapon — get paid. Shoot out X number of lights undetected — straight cash, homey. Stages also contain hidden goodies in the form of flash drives, laptops and high-value targets that must be captured alive. Although it’s a fine system, the fact is you earn money too fast. So much so that you’ll probably have the loadout you want long before your first playthrough has concluded.

Despite the focus on stealth, Blacklist tries to encourage other play styles with three focuses being graded at the end of each mission: Ghost, Panther and Assault. As you’d suspect, Ghost is all about going undetected with points for bypassing foes entirely. Panther focuses on silent kills as you attempt to navigate levels without sounding alarms. Assault is all about taking off your silencer and kicking a little ass, though while you’d think muscling through levels would be the easiest solution, I actually found Panther was the simplest.

Of course, there are times when the game will make those decisions for you by pigeonholing you into a specific approach. It comes up a few times in the story missions — such as a “non-lethal” trip to Gitmo — but is mostly saved for your crew’s secondary ops. Some result in instant failure if you’re detected. In others an alarm means reinforcements are deployed. There are even Horde-esque wave defense segments and co-op exclusive undertakings.

These side missions are essential to supplementing the content of a fairly modest campaign, so it is unfortunate that they can be so frustrating. This is especially true with those in which you cannot be detected as they require you to reach multiple spots with no checkpoints. It’s not uncommon to spend 10-plus minutes carefully picking your way through only to be spotted at the very end, which sends you cursing back to the beginning. Once that happens a couple times it’s easy for things to snowball quickly as anger and frustration aren’t conducive to methodical, precise gameplay.

Far more enjoyable than that is the game’s online multiplayer. The Spies vs. Mercenaries formula has been expanded, and the cat-and-mouse battles between the agile, third-person spies and the deadly but slower first-person mercs are great fun. Plus, all that money you’ve been earning while playing through the game’s solo offerings can be spent here on handy new weapons and gadgets.

In some ways, Splinter Cell: Blacklist is a victim of trying too hard to straddle the line between the action-heavy Conviction and stealthier offerings like Chaos Theory. The result is an uneven showing, but one that still features much more good than bad.

By HC Green
Tags: Splinter Cell
This entry was posted on Wednesday, September 11th, 2013 at 12:36 pm and is filed under Herija Green, Video Game Reviews. You can follow any responses to this entry through the RSS 2.0 feed. You can skip to the end and leave a response. Pinging is currently not allowed.