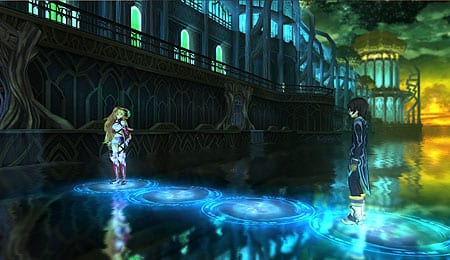 Tales of Xillia is the latest release of the famed Tales series, developed by Namco Tales Studio and published by Namco Bandai Games. In this installment, players assume the role of not one but two characters — a series first! While Tales of Xillia is a RPG at its core, it has the intensity of a brawler.

Whether you’re battling against several foes or simply traversing the world map, the controls remain responsive and comfortable throughout. Although the controls during the fight sequences can take some getting used to, they quickly become second nature and pulling off combo moves and performing team-up attacks are a cinch.

Tales is definitely a looker. Even though the world map is painted with a coat of blurry, sad textures, the architecture all around you is unique and attractive. For example, early on in the game after your first town you are set ashore in a new land unfamiliar to you. While it looks normal enough at first, you soon come to find that the land beyond is torn by colliding “mana climes” — think two giant tidal waves of infinite spiritual energy clashing together and peeling the very surface of the planet off. Animation is also very well done, bordering on amazing during fight sequences. The wide move set will have your chosen character flipping around and round-housing people in such a graceful way that it’s only comparable to figure skaters.

Usually the voice acting in any given anime game is pretty wishy-washy, but such is not the case in Tales of Xillia. Each important character you encounter is voiced well and fits the bill. That’s not to say that some of the dialogue isn’t cheesy, because it can be, but what’s important is the execution of those cheesy lines — which is magnificent.

The music is an expected mix of traditional Asian instrumentation and even some crunchy rock riffs, with the more traditional music being used much more sparsely. During a fight, you can expect to hear the exact same thrash-rock jam over and over again.

Keeping with the expectation of the series, Tales of Xillia is chock full of gameplay and can easily take 35-to-40 hours to complete with many side quests that offer some variety. In the beginning, you’re given the choice of playing as Jude Mathis, a medical student adept at understandings spirits, or Milla Maxwell (first 10-minute spoiler alert), who is the embodiment of the oldest and most powerful of spirits.

Once chosen, the adventure to save the spirits begins. Researchers associated with Jude have secretly resurrected an ancient technology known as Spyrix, which is a way to achieve great levels of usable power but at the cost of draining spirits into nothingness.

Rieze Maxia is a huge land for your adventure, and traversing can be humorous and awfully dangerous. Approaching an enemy on the field map will queue a battle. During a battle, your chosen character and up to three companions have a knockdown, drag-out brawl.

A cool feature they’ve come up with is the linked-battle system. By pressing a directional button corresponding to the desired character, you’ll link up with them. Linking up can help flank an enemy, break an enemies block, or even get your own ass covered while you take care of business in front of you.

Battles take place on a 3D map, and fighting takes place in a 2D plane. Confused? Well, you may freely run around this map using a trigger toggle, but the action will lock into a more traditional style once the trigger is released. After a battle, you may upgrade your character if you’ve gotten enough points. Using your Lilium Orb, you assign GP (or Grow Up Points) to unlock new skills and stat benefits.

One of the most interesting things about this installment of Tales is the merchant upgrade system. All throughout the world you can find various items that seem valueless. These items can actually be donated to any given merchant (items, armour, weapons, etc.) in order to level up the shops so that they carry better, generally more expensive equipment.

Another great factor is even though there aren’t mini games to speak of, there are plenty of side quests and even character-driven skits that keep your attention from dividing.

If you’ve ever been into the Tales series or are curious about them, Tales of Xillia is a great place to start. The combat is simple but engaging, the characters are all voiced extremely well, and it’s just flat-out well done. The graphics may be a little “meh” at times, but that won’t stop anyone from having a tremendous amount of fun.

By Jeff Cater
This entry was posted on Tuesday, September 10th, 2013 at 12:03 pm and is filed under Jeff Cater, Video Game Reviews. You can follow any responses to this entry through the RSS 2.0 feed. Both comments and pings are currently closed.