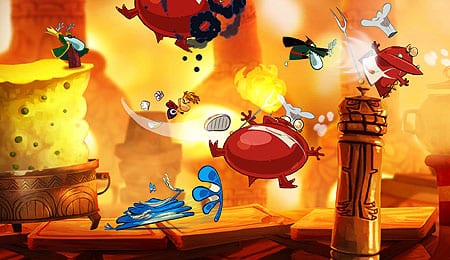 Rayman’s solution to “too many chefs spoil the soup” is unorthodox yet effective.

As someone who grew up in the 16-bit (and to a lesser extent, the 8-bit) era, I invested many an hour into platformers. Over the years, however, that style got pushed to the back burner in favour of more adult-oriented titles that thrive on violence and realism. Into that marketplace comes Ubisoft’s Rayman Origins, a marvelous side-scrolling platformer that serves as a reminder to long-time gamers, and an introduction to newcomers, of just how amazing the genre can be.

At its core, Rayman Origins is a very simple game to control with just three unique buttons to keep track of: sprint, jump and punch. From that simple setup, new abilities are introduced throughout the game to keep things fresh. Even as more mechanics become available — such as running up walls or unleashing a powerful dive attack — things continue to feel second nature, creating an experience where the controls are nearly flawless.

From concept to execution, it simply doesn’t get much better than Rayman Origins. Everything is done in a fantastic art style with colourful foes, vibrant backgrounds and a host of great animations that draw you into this quirky world. There’s a tremendous amount of variety found in the locations, ranging from lush jungles to some beautiful underwater levels. Even within these settings, the game still mixes things up with great use of shadow and lighting, including a few stages that look like they were ripped straight from the concept art of Insanely Twisted Shadow Planet.

On top of all that, there are also the little details that taken individually may not seem like much, but put together really add a lot. Things like the way enemies inflate when you stomp on them and slowly float off the screen or the expression on the mosquito’s face when it’s got a mouth full of stuff. It’s truly a stunningly created game that oozes visual charm from every pore.

While not the equal of the graphics, the audio presentation is still nearly as excellent. The soundtrack is a high point with lots of upbeat tracks that help defuse the challenge level by keeping the mood light. I’m not as sold on the mix of high-pitched gibberish and pig Latin that constitutes the voice acting, though, as it wore out its welcome at times.

Deep within the Glade of Dreams, Rayman and his buddies are enjoying a nice snooze. Unbeknownst to them, however, their snoring draws the ire of an old woman in the Land of the Livid Dead. In response, she sends a force of evil creatures to capture the Electoons (little pink balls with blonde hair) and scantily clad Nymphs. Now with the world in turmoil it’s up to Rayman and friends to save the day.

It’s all just a goofy setup for one of the best side-scrolling platformers in recent memory. It starts simply enough with precision jumping (both around the environment and onto your enemies’ heads), but soon you’ll find that Rayman Origins has a lot more to offer. Each new world adds additional powers that you can utilize, and it brings lots of new twists on the gameplay along with it.

While platforming is still the most heavily utilized element, there are also entire levels that take place underwater where you’ll swim between stinging jellyfish and follow critters that emit light to keep the things lurking in the dark from snatching you. There are also moments of genuine speed that may remind some of Sonic as you careen through streams and wind currents, collecting Lums (think coins with wings) as you go. Several levels even put you on mosquito back as you fly around, shooting and inhaling enemies in a great nod to side-scrolling shooters.

Where Rayman Origins really nails it, though, is in degree of difficulty. Even a moderately skilled player can finish the levels through sheer force of will thanks to plenty of checkpoints. However, each level contains multiple goals to accomplish so that seasoned gamers looking for added replay value or simply to push themselves will have the opportunity.

Although there are some exceptions, most levels break down like this: there are two hidden cages filled with Electoons, three numerical thresholds for Lums and a target time for speed. Finding the secret areas is usually just a matter of being observant, but collecting all the Lums and beating the clock require some serious skill.

Gather enough Electoons and you’ll unlock additional characters and special levels in which you have to chase down a fleeing treasure chest. These stages prove to be quite challenging as they pretty much require you to nail every jump (no checkpoints here). Catch the chest and you’ll earn a “gem” — acquire all 10 of these and a special surprise awaits you.

Beyond the stellar single-player action, Rayman Origins also supports local co-operative play with up to three friends. I was only able to play with one other person so I can’t speak to four-player zaniness, but two-player couch co-op is tremendous fun. Even though there’s nothing specifically built for co-op play, such as accessing new areas, it’s still a great complement to going it alone.

As glowingly as I’ve written about this game, it’s not without some minor hiccups. Most notable to me are the sections predicated on trial and error for advancement, which includes some pattern recognition for boss fights. There are also occasional spikes in the challenge level that may test the resolve of some.

Even if I were to write another thousand words I’m not sure that I could adequately cover everything that makes Rayman Origins something special. It’s a throwback without being nostalgic. It’s referential yet still unique. And, it’s quite possibly the most pure fun I’ve had with a video game this year.

By Herija Green
This entry was posted on Saturday, December 3rd, 2011 at 1:06 pm and is filed under Herija Green, Video Game Reviews. You can follow any responses to this entry through the RSS 2.0 feed. You can skip to the end and leave a response. Pinging is currently not allowed.