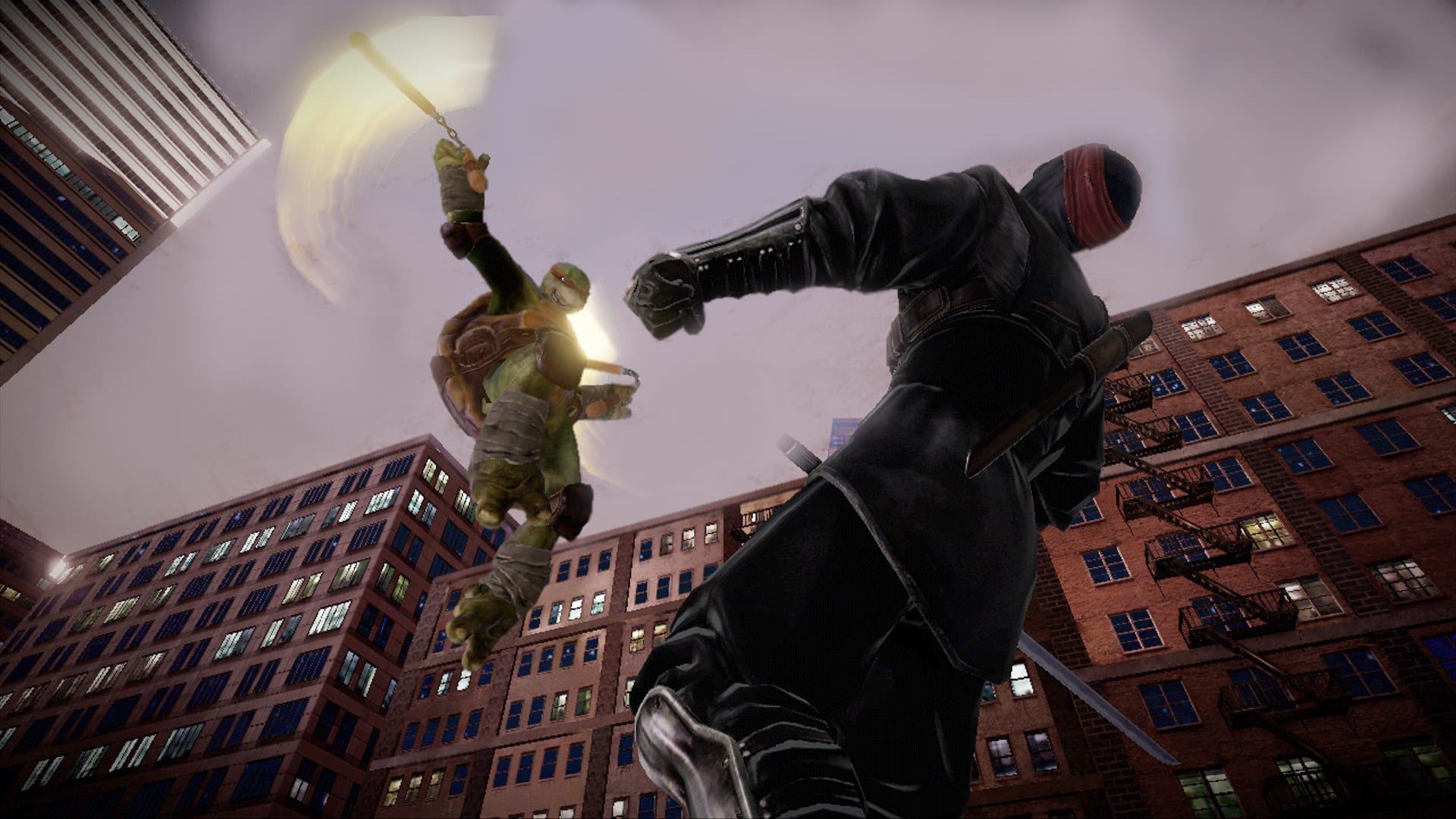 For the second time in the Summer of Arcade’s history, the “heroes in a half shell” are being featured with the all-new Teenage Mutant Ninja Turtles: Out of the Shadows joining 2009’s Turtles in Time Re-Shelled. Suffice to say, this year’s version is much more ambitious as it moves Leonard, Donatello, Michaelangelo and Raphael into 3D-style combat. Whether that transition is a smooth one, however, is another matter.

Given the lineage of Teenage Mutant Ninja Turtles games it seems logical to suspect that this would be a straightforward button masher. It isn’t. Attacks are split into two basic categories (weapon and kick), and there’s also a Arkham-esque counter/evasion system. That’s just the beginning, though, as a modifier is used to unleash more powerful strikes that become available after chaining combos together for a set number of strikes.

There’s a rhythm to the combat that takes time to develop, especially since most early fights can be won by spamming the two attack buttons. Once you start facing more and tougher foes it becomes necessary to mix up your basic strikes while monitoring your enemies, who won’t stand idly by while you beat their buddies to a pulp. As you get more comfortable and unlock additional moves, battles can turn into fluid encounters in which you’re seamlessly combining attack and defense.

As much as I grew to enjoy the combat, there are some questionable decisions. At the forefront is the right stick’s double duty as it controls the camera and is used to unleash several special attacks. It’s not very precise, and there’s already enough moves at your disposal that you don’t really need another set of intermediate strikes. There’s also a hacking mini game that isn’t much fun and takes far too long to load. It simply doesn’t belong.

It seems ironic that a game entitled Out of the Shadows would have a very dark, muddied look for its title characters — a style dramatically juxtaposed by the whimsically drawn frames that serve to advance the story. Also, despite carrying the Nickelodeon name, the turtles bear no resemblance to that version, nor do they favour the old Archie comic look. Instead it’s most similar to the harder-edged Eastman and Laird originals, but none of that carries forward to their personality (which is very cartoonish). It’s an odd blend.

Enemy variety and level design aren’t strong, either, and to routinely have objects pass in front of the camera to obstruct your view (rather than making them transparent when necessary) in both campaign and arcade mode was annoying. If there’s a saving grace visually it’s with the actual combat animations. There’s a good variety of moves, especially as you level up, and once you start chaining them together it can look pretty slick.

Outside of a little nostalgic twinge for “Turtle Power,” the theme song from the original live-action TMNT film, this game is best played with the volume turned way down. The beat-heavy tunes don’t gel with the action and quickly become an irritant, while the inane banter and (not-so) witty quips from the turtles repeat ad nauseum and seem unending.

Fans of the turtles will find the characters and plot (a term I use loosely) very familiar. Basically Shredder is up to something, his daughter Karai and Baxter Stockman are assisting him, and Krang is somehow involved — sadly, neither Bebop nor Rocksteady make an appearance. Sprinkle in a healthy dose of the Foot clan with a little April O’Neil getting abducted and you’ve got enough to string together four levels that should take around 4-to-5 hours to complete.

While there a few moments of hacking and pseudo parkour to be found, Out of the Shadows is all about the combat and, thankfully, it’s the game’s high point. It took some time and dedication for that to come to light, however, as my feelings toward the game changed considerably once I stopped trying to mash my way through and started adapting. It also helped to accept that the game is built around four-player combat, and that team attacks (even with A.I. partners) were critical to success.

Beneath the fighting action is a robust leveling system that unlocks dozens of new moves and counters, as well as upgrading the turtles’ ratings in things like health and speed. These aren’t superficial changes, either, as your options in a fight increase dramatically, which in turn makes the game a lot more fun. So while you may be tempted to just try to push through the campaign, I’d recommend playing the first chapter a few times and unlocking some new moves.

My endorsement of the combat comes with a caveat: It does eventually get quite repetitive, even with all the unlocked moves, because of a limited enemy roster that’s made even thinner by how similar they feel to one another whether they’re punks, ninjas or robots. The game’s camera can also conspire against you, rotating dynamically to highlight moves but ultimately leaving you to readjust on the fly while enemies attack right after the move animation has concluded. One final issue of note is that there are times when it’s unclear where you’re supposed to go next.

Beyond the campaign there’s also a challenge mode, a survival mode and a side-scrolling arcade mode that essentially re-imagines the campaign as a 2D throwback. The arcade mode is interesting and worth playing, but I didn’t particularly enjoy the others. Holding out solo against wave after wave of foes is tiring, and the challenge mode utilizes a different camera angle that’s a bit unsettling after playing the campaign. Online play and local two-player co-op are also available, and in my trips into cyberspace the game performed quite smoothly.

It’s worth noting that I have read and heard about glitches both online and off, but in my considerable time playing the game the only problem I ever encountered was the game freezing — it happened the first time I played and never again — so it appears to be a “your mileage may vary” situation.

There’s no denying Teenage Mutant Ninja Turtles: Out of the Shadows has issues. The most grievous ones (the presentation) don’t affect the gameplay, though, and the combat has some staying power once it clicks.

By Herija Green
This entry was posted on Saturday, August 31st, 2013 at 11:53 am and is filed under Herija Green, Video Game Reviews. You can follow any responses to this entry through the RSS 2.0 feed. Both comments and pings are currently closed.