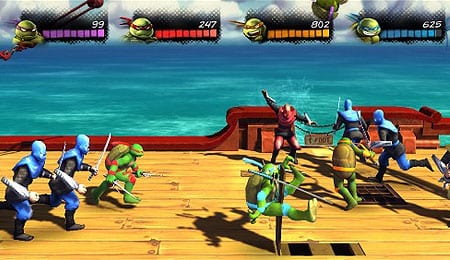 To say the Teenage Mutant Ninja Turtles and I go way back would be an understatement. In fact, my parents made me a Halloween costume based on the original Eastman and Laird comic book before Archie got a hold of it and gave the turtles different coloured masks to help distinguish them… and no one knew what I was supposed to be. However, even with my longtime love of turtles I have only vague memories of playing TMNT: Turtles in Time in the arcade, so reviewing this game wasn’t exactly a stroll down Memory Lane. Instead, it was more of a chance to reacquaint myself with Leonardo, Donatello, Raphael and Michelangelo in the recently released TMNT: Turtles in Time Re-Shelled.

Before delving into the review, it’s important that any nostalgia-infused readers understand that this game is a remake of the arcade version and not the Super Nintendo one. The SNES version featured additional levels along with some different enemies and bosses. That means no Rocksteady or Bebop dressed in pirate garb (you’ll be getting Tokka and Rahzar instead), no Super Shredder and no Technodrome level.

As a side-scrolling beat-’em-up based on a ’90s arcade game, Turtles in Time Re-Shelled features some dirt simple controls. You’ll move your turtle with either the left stick or the d-pad with attacks mapped to the X and Y buttons. The X button is your basic attack, while the Y button unleashes a heavy attack that is unique to each turtle and can be used on multiple enemies simultaneously. If you’ve been moving forward a few steps at the time you can utilize dashing (X) and sliding (Y) attacks, which while weak, will usually knock your opponent off their feet. The A button jumps — press it twice to perform a double jump — and can be combined with the X button to perform aerial attacks. You’ll also find that unlike the original version you can attack diagonally.

Should you ever lose sight of your turtle, which is almost sure to happen at times given the feverish action and sheer number of enemies on the screen, pressing the left trigger will cause a word balloon with an exclamation point in it to indicate where your turtle is.

The graphics have been given a complete overhaul, and I must say the results are impressive. In fact, the look of Turtles in Time Re-Shelled is one of my favourite things about it. There’s just something about the cartoonish nature of the graphics that add to the fun. It moves along very smoothly and has some cool little touches, like Foot soldiers slipping off their hover boards. One thing I did notice was a little screen tearing during the opening cinematic, but considering I haven’t seen any evidence of it during actual game play it’s a minor concern.

While I really enjoyed the graphical update, the audio didn’t click as well for me. The original music has been replaced with an uninspiring melody that will undoubtedly annoy some nostalgia buffs, though Xbox 360 offers the ability to use a custom soundtrack for those that care to hunt down the sounds of the original. The turtles (no longer using their voices from the ’90s cartoon) spout their usual lines — My toes, my TOES! — which while faithful to the arcade version, are still annoying at times…and is it too much to ask to have worked Vanilla Ice’s rap in somehow?

Walk to the right, mash the X and Y buttons to pound Foot soldiers and other assorted baddies. Rinse and repeat until reaching the end of each level, at which point you’ll encounter a boss fight. There’s really not much more to the game, and you should be able to clear all nine levels (one of which is merely a one-on-one fight with Shredder) in under an hour. There are four difficulty settings to choose from, and you’ll earn an achievement by beating the game with each of the turtles once. You’ll also have the option to play any level in a Quick Play Mode, while the more skilled crowd can play Survival Mode, which gives you just one life to clear the entire game.

However, the simplicity of game play and dearth of options doesn’t do the game justice. There’s an undeniable charm associated with Turtles in Time Re-Shelled, and it isn’t purely grounded in nostalgia value. It’s something you can pick and play regardless of your skill level as a gamer, and it’s a fun game to play with friends and family — even those that aren’t regular visitors to the 360 shrine.

On-line co-op, which allows you to team up with three other players, is seamless. It’s easy to find a game and lag is non-existent. The only gripe I have about four-player action is that it’s pretty much inevitable you’ll lose track of your turtle at times and will think you’re fighting two Foot soldiers in the lower right corner while you’re actually battling air in the upper left. This is especially true on the higher difficulties when the screen fills with enemies. Still, it’s the co-op mode that gives this game its staying power.

Being that this is a recreated 18-year-old arcade game, Turtles in Time Re-Shelled isn’t going to be for everyone. It remains true to its roots as a button mashing action game and lacks the depth and polish of the genre’s current measuring stick, Castle Crashers. However, I found it to be a fun experience and well worth the reduced price tage (it was dropped it from $15 to $10 shortly before release, a decision I wholeheartedly agree with). Now if I could only find my “Ninja Rap” single…

By Herija Green
This entry was posted on Monday, August 10th, 2009 at 9:30 am and is filed under Herija Green, Video Game Reviews. You can follow any responses to this entry through the RSS 2.0 feed. You can leave a response, or trackback from your own site.