Jonathon Niese Needs to be Owned Down the Stretch 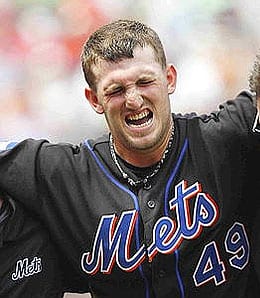 Jonathon Niese’s had plenty of injury issues over the years, but looks healthy now.

After his career year in 2012, New York Mets starter Jonathon Niese had been having a fairly forgettable 2013 season, marred by a rotator cuff woe that cost him nearly two months. Really, the most notable thing the southpaw has done this year from a Fantasy perspective was to burn Jason Heyward owners by breaking the Atlanta outfielder’s jaw last week.

The last time we checked in on Niese, he was having issues against lefties. Well, he fixed that in the second half of 2011, completely corrected that problem last year and has continued that success into this year (though clearly, Niese’s work against righties this season was substandard).

Suddenly, however, Niese looks like a serious asset down the stretch, and in leagues he was unowned he’s been getting scooped off the wire like mad as a result. The Mets suffered a major blow to their pitching staff Tuesday when young ace Matt Harvey landed on the DL, possibly facing Tommy John surgery. So what does Niese do? Oh, merely tosses his second career shutout – a three-hit masterpiece against the Phillies to help the club snap a five-game skid.

Niese started the year promisingly, looking like he could build on his breakout 2012, but May was just plain ugly. He was sort of righting the ship in June before getting hurt.

Now, he’s heating up at the right time for his owners, if not the Mets, who are long since out of contention. Niese set a season high with nine Ks on August 16 and then matched that in his last start before Tuesday’s gem. His velocity has been just fine since his return (although as a “crafty lefty” he doesn’t necessarily rely on that).

After setting a career high in innings last year, obviously Niese won’t come anywhere near that this season. But for one night, at least, he looked like a serious innings eater – and also flashed some mad skills at the dish, with a three-run double, a walk and a run.

The key indicator that separates Niese’s 2012 from this year is his command. After a career best 3.16 K/BB ratio last year, he’s at a career-worst 1.97 this year. That was improving in June (14 Ks, five walks), but is off the charts superb now (28 Ks, six walks in August).

If this trend continues, Niese won’t just equal what he did last year, he’ll be capable of building on it.

What do you think? Let us know in the comments below what you’re expecting out of Niese down the stretch.

Crave more in-depth Fantasy analysis? Then join us every Thursday at 9 p.m. EST for RotoRob’s Fantasy Baseball Weekly Podcast on Blogtalkradio. Tim McLeod and RotoRob will entertain and edify you for a half hour or more each week. This week, Tim’s out of town, but NFL Editor Josh Johnson will fill in. Tune in here.

By RotoRob
This entry was posted on Wednesday, August 28th, 2013 at 12:32 pm and is filed under BASEBALL, Player profile, RotoRob. You can follow any responses to this entry through the RSS 2.0 feed. You can leave a response, or trackback from your own site.