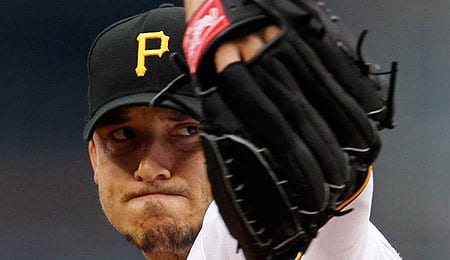 Charlie Morton has quietly been providing nice value for some time.

As another season heads into the home stretch, it’s time to turn our attention to some of the great International talent that could be heading to the majors in the very near future. Masahiro Tanaka and Jose Abreu are two very special players that those competing in Dynasty and deep keeper leagues need to find a home for. The wait will be worth it.

Brian Roberts, 2B, Baltimore Orioles (CBS: 24 per cent owned, ESPN: 8 per cent): It seems we can finally use the words “healthy” and “Brian Roberts” in the same sentence. It has been a long time coming. In his past seven starts, Roberts has driven in eight runs, capped off by a grand slam Friday against the A’s (see the video below). Finding help in those counting categories out of the middle-infield is never an easy task and Roberts should provide just that heading into September.

Charlie Morton, SP, Pittsburgh Pirates (CBS: 18 per cent owned, ESPN: 8 per cent): Very quietly, Morton has been getting it done with four consecutive quality starts. The Pirates will need him to be on his “A” game down the stretch to have a shot at a playoff spot.

Khris Davis, OF, Milwaukee Brewers (CBS: 30 per cent owned, ESPN: 35 per cent): Over his past seven games, Davis has gone 11-for-23 with three homers, six RBI, and has scored seven runs. Two of those long balls were on Friday against the Reds. The 25-year-old outfielder has the full-time gig down the stretch and is making a very strong statement that he belongs in the Brewers everyday lineup heading into 2014.

Masahiro Tanaka, SP, Rakuten Golden Eagles (CBS/ESPN: unowned): Tanaka is looking at a posting either this fall or in the fall of 2014. Either way the young phenom is worth the wait. We’re talking about a starter that hasn’t lost a game in over a year and is currently sporting an 18-0 won-loss record with an amazing 1.15 ERA. Dynasty league owners take notice now and get Tanaka rostered.

Jose Abreu, 1B, free agent (CBS/ESPN: unowned): The big power bat from Cuba has escaped the island and will be showcasing his tremendous power in a fall audition. He is arguably the best power bat to come out of Cuba in recent memory and we had the opportunity to witness this in the 2013 WBC when, in 25 at-bats, he smacked three long balls and drove in nine runs. Abreu should be snatched up in all deep keeper formats.

Darin Ruf, 1B/OF, Philadelphia Phillies (CBS: 41 per cent owned, ESPN: 49 per cent): Ruf is absolutely pounding the ball with homers in three consecutive games and four of the past seven. Nearly six in 10 of those playing in CBS leagues are missing a great opportunity.

Adam Eaton, OF, Arizona Diamondbacks (CBS: 45 per cent owned, ESPN: 6 per cent): The hype over Eaton heading into this season is finally being fulfilled. A strong finish by him should lock up a regular gig in the D-Backs outfield and top-of-the-order status in their batting order next year.

Jordan Schafer, OF, Atlanta Braves (CBS: 4 per cent owned, ESPN: 1 per cent): Jason Heyward is lost for the balance of the year with a broken jaw suffered when he got plunked by Jonathan Niese last week and B.J. Upton continues to struggle. Schafer hasn’t exactly been lighting it up lately, but he’ll get the opportunity for regular at-bats in September.

Billy Hamilton, OF, Cincinnati Reds (CBS: 33 per cent owned, ESPN: 1 per cent): Expanded rosters means expanded opportunities in some cases and if you feel the need for speed, Hamilton is a good bet to contribute even as a pinch runner in the stolen base category.

Carlos Martinez, SP, St. Louis Cardinals (CBS: 17 per cent owned, ESPN: unowned): Jake Westbrook hit the DL last week and the Cards are turning to their young phenom to fill the void in what could be a two-start week.

Tommy Hunter, RP, Baltimore Orioles (CBS: 12 per cent owned, ESPN: 6 per cent): Jim Johnson is still the closer in Baltimore but Hunter is solidly tending the fort in a setup role and got his second save last week.

Tyler Clippard, RP, Washington Nationals (CBS: 19 per cent owned, ESPN: 17 per cent): Rafael Soriano has joined the ranks of the many underperforming Nats this season and has now allowed runs in five of his past seven appearances. Clippard, arguably the best Washington reliever this season, could be in line for some save opportunities in September.

Trevor Rosenthal, RP, St. Louis Cardinals (CBS: 27 per cent owned, ESPN: 17 per cent): Closer Edward Mujica has been dealing with some shoulder discomfort. An ounce of prevention in the form of Rosenthal isn’t a bad move for Mujica owners.

Who is your waiver wire pick of the week? Let us know in the comments below.

By Tim McLeod
Tags: Masahiro Tanaka
This entry was posted on Sunday, August 25th, 2013 at 12:52 pm and is filed under BASEBALL, The Wire Troll, Tim McLeod. You can follow any responses to this entry through the RSS 2.0 feed. You can skip to the end and leave a response. Pinging is currently not allowed.