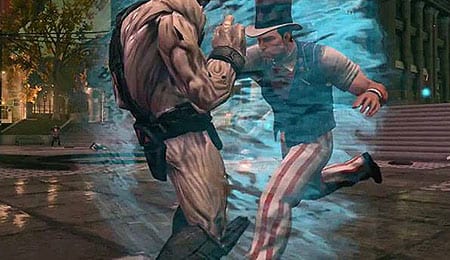 Captain ‘Merica started his own Avengers. With blackjack and hookers.

A busty beer girl with an evil British accent. A member of Parliament (complete with a big, fancy wig) in a superhero costume with the most ghetto voice imaginable. A toilet voiced by Nolan North. These are not who you’d expect to be President of the United States turned superhero fighting aliens, but Saints Row 4 pumps out more than enough outrageousness to make these possibilities.

Saints Row: The Third felt like a huge step above most sandbox games in both shooting and driving. Saints Row 4 offers these as well, but it also attempts to do something most wouldn’t dare attempt: fix what is not broken. In that sense, it is like taking a brand new car into a repair shop and getting it returned with a Slurpee machine, a horn that plays Slayer and the ability to fly.

The new superpowers offer a much more fun way to get around, and they control surprisingly well, too. I was collecting data clusters (items used to upgrade your powers) with ease despite how fast I was running and how high I could jump. Any doubts I had about these powers were removed almost instantly.

My only issue would be with the aircraft. These controlled just okay in SR3, but here they ask you to do a lot more while flying them, and it ends up being very frustrating. These instances are rare but bothersome nonetheless.

Weapon and power effects aside, Saints Row 4 is not a good looking game at all. While it is an improvement over the other entries, they were all pretty ugly for their time as well. The goofy stuff going on does give the city some charm to it, but that does not make up for the fact that there are PS2 games that look better than Saints Row 4.

This is made even worse by the number of technical issues in the game. Put bluntly, Saints Row 4 feels cheap. The game froze on me a few times, there were numerous frame rate issues that made it feel like a slideshow, and the glitches were out of control. This may be more excusable due to the nature of sandbox games, but an ugly game is still an ugly game.

Stan Bush’s The Touch, of Transformersfame, is a song in this game. That alone is enough for me to give this game perfect marks. Leaping over a 50-foot building while “YOU’VE GOT THE TOUCH!” blares at me is one of the best experiences I’ll ever have with a game. Even without that, however, this soundtrack is stellar as there isn’t a bad song on it. It also lets you pick your favourites to create a mix tape, which is a huge plus. The game would use certain songs during missions as well, all of which caused me to burst out laughing.

Speaking of laughing, the dialogue is equally amazing with some of the funniest lines I have ever heard from a video game. The sound effects know what is supposed to be satisfying, what should be addicting and what needs to be funny as well. I have no complaints here.

It helps that there are a plethora of side missions and objectives that make good use of these mechanics. These offer a fantastic variety as well, including (but not limited to): committing insurance fraud, running in time trials and destroying everything with a mech suit. These feel like Infamous for a frame of reference, but the gameplay is a lot more fun than anything either game in that series has to offer.

Not just in the superhero-in-a-sandbox sense, but like Infamous, the collectables, side missions or cars that need to be blown up make it impossible to go straight to a mission without having a little fun. In fact, I enjoyed going through the city so much that I’d often pick the farthest mission away so I could experience what Steelport had to offer.

This does present one of the game’s biggest problems, however, and that is how much content is recycled from Saints Row: The Third. Aside from the alien constructions built into it and a new coat of paint, Steelport is the exact same city as it was last time. The superpowers do a lot to alleviate this as it’s simply more fun getting through the city at super-fast speeds rather than driving or flying a jet, but it is still disappointing.

Meanwhile, villains are the same guys you fought from the last three Saints Row games with the exception of alien Emperor Zinyak. They are just figments of your crew’s minds so there is no real character development with them. It feels like a cheap way to make a villain feel a step above regular enemies without letting us see them actually earn that reputation.

There are also a few missions that are downright terrible. These mostly stem from early ones where you want nothing more than to use your superpowers. Yet these are restricted to a Matrix-inspired simulation — and in other people’s simulations or the real world they are unavailable. In the beginning, this feeling is downright horrible. For the first 5-to-6 hours I just wanted every story mission without satire to end.

The satire, however, is brilliant enough to make up for it. Saints Row 4 takes shots at all kinds of games, from Call of Duty to Metal Gear Solid with a special shout out to Mass Effect 2. When it mocks something well, it completely removes the issue of taking away superpowers. Later on this is helped by a combination of better equipment, upgrades, superior mission structure and just having had a good fill of enjoying your superpowers.

Yet even these issues are minor complaints when compared to the absolute worst part of the game: the glitches. This game is as bad as anything Bethesda has released in terms of how buggy it is. It froze on me four times in a single day and seriously suffered from slowdown. Saints Row 4 definitely offers lots of fun, but it can also be a very annoying and frustrating game.

Saints Row has come a long way since 2006 when it was little more than a Grand Theft Auto clone with co-op. From there it became a wackier version of its inspiration with Saints Row 4 taking the crown of craziest sandbox game ever made thanks to the additions of superpowers and aliens.

And yet, even though Saints Row 4 is a game I was sad to see end — where I did every single thing the game had to offer and will be replaying it this year, next year and 10 years from now — I cannot in good conscience score it anything higher than this because of how bad the bugs get.

By Casey Curran
This entry was posted on Monday, August 26th, 2013 at 11:59 am and is filed under Casey Curran, Video Game Reviews. You can follow any responses to this entry through the RSS 2.0 feed. Both comments and pings are currently closed.