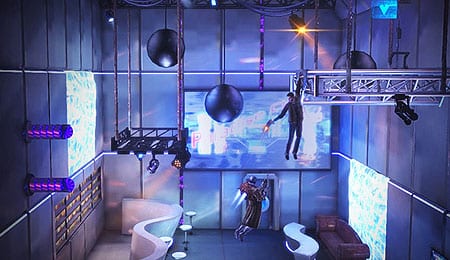 It takes time for the controls to click so, uh, hang in there.

With Xbox Live’s Summer of Arcade opening with strong showings from both Brothers: A Tale of Two Sons and Charlie Murder, it now falls on Ubisoft’s Flashback to continue the momentum. Presented as an updated version of the original released some 20 years ago, Flashback has its moments as an action adventure, but there are also some significant bumps along the way.

Were you to simply look at the control layout for Flashback odds are you wouldn’t be surprised — move with the left stick, aim with the right, jump, roll, etc. In action, however, this title takes some getting used to because jumping vertically and horizontally are done with different inputs. Here, any ledge you can grab will be reached by pressing up on the left stick. Meanwhile, the “A” button is only used to jump over obstacles and across distances that are essentially parallel to one another.

Adding to the confusion, at least initially, is the game’s shield. Instead of being perpetually active and drained via damage, the shield must be manually turned on by pulling the left trigger. It lasts only a few moments, though, and chances are you’ll absorb more enemy fire than you’d like figuring out the unit’s timing. There’s a rhythm to defense in Flashback, and once you get the hang of it — along with a comfort level for your evasive role — the enjoyment rises noticeably.

Your offensive loadout consists of a gun (trigger) and grenade (bumper) and is completely mapped to the right side — holding down the trigger charges up a heavy shot, but that’s the extent of your arsenal. Later on the game introduces a teleportation device that allows you to reach new areas. Don’t let that make you think this is a Metroidvania game. It’s not. Even though exploration is encouraged, once you leave a primary area, there’s no going back

Generally speaking, Flashback looks pretty good with some interesting (and varied) environmental backgrounds. The third act, which takes place in a futuristic city on Earth, was easily my favourite with its flying cars and neon colour schemes immediately eliciting memories of Blade Runner (and considering one of your enemies is designated a “replicant” I’m thinking that wasn’t by accident). The frame rate remains steady throughout and most of the character animations look smooth.

There are some visual hiccups, though, including a glitch that saw me stuck running in place — one that required a full level restart to fix (reloading the checkpoint did not). There’s a very limited allotment of enemy types with four recurring foes and a few bosses representing the entire selection. And even with those minimal options, it’s rare to encounter more than one type at a time. The memory cut scenes are also barely animated and look too much like rough concept art.

Whatever missteps the game makes graphically are nothing compared to the audio. The main character, Conrad B. Hart, is voiced miserably, effectively transforming what should be a bad ass intergalactic special agent into a glib d-bag. To be fair, the supporting roles are just as bad — they simply don’t talk as often. Background music is mediocre at best — an issue that’s more noticeable after the work from its Summer of Arcade predecessors — and melee strikes are muted and unsatisfying.

There aren’t a lot of compelling stories amid the XBLA crowd. Even with those tempered expectations in place, the plot of Flashback fails to move the meter. The Bourne/Total Recall premise of “spy has lost their memory” is fine, but there’s so little done with it that neither the macro (world in peril from alien threat) nor the micro (they have your girlfriend, too!) elements click in any meaningful way.

With the story being a dud, that leaves the game’s blend of platforming, exploration and action to carry it, and while Flashback isn’t quite as fast paced as some other, similar looking XBLA games (Shadow Complex, Deadlight) it still offers up some solid gameplay.

To be clear, though, there’s a reason action is the last element listed. Other than drones it’s uncommon to fight more than one or two foes at a time, and there are lengthy periods when enemies are nearly absent from the game. Instead, the focus is often on figuring out how exactly to get from Point A to Point B with plenty of switches being activated and climbing up and down. I wouldn’t classify them as puzzles, but rather more like semi-complex paths.

When the time comes to fight there’s not much variety in enemy types or tactics. Drones, which only possess melee attacks, are easy pickings unless they corner you. Cyborg enemies either fly around or teleport, but they’ll stay still when firing, turning those battles into timing-based confrontations in which if you can properly deploy your shield you’ll just pelt them into submission. The final alien enemy does have a couple tricks up his sleeve. Unfortunately the end result is more of a lengthy dance (roll, shoot, roll, roll, shoot, etc.) with a bullet sponge than an intense firefight.

Another factor in the lukewarm combat is that there’s no tangible progression. You locate your pistol within the first couple minutes and unlock the charge shot shortly thereafter… and that’s it. There are no additional guns, and the grenades only felt viable on unsuspecting foes. The game allows you to level up skills through earned experience, and upgrades to your equipment can be found throughout, but none of it makes an obvious difference during gameplay.

Flashback isn’t a particularly long game, likely taking in the 3-to-4 hour range your first time through on the default difficulty. There’s also a small suite of VR missions to tackle for experience that can tack some extra time onto that. Once you finish you have the option to restart on another difficulty setting (or the same) with all accumulated levels and upgrades carrying forward. The original version is also available on a reduced-size, arcade cabinet screen.

Despite a number of issues that erode the experience, I still enjoyed much of my time with Flashback. It wasn’t quite what I expected based on the trailers, but it’s at least worth checking out the demo to see if you can get into the game’s non-traditional approach.

By Herija Green
This entry was posted on Wednesday, August 21st, 2013 at 11:01 am and is filed under Herija Green, Video Game Reviews. You can follow any responses to this entry through the RSS 2.0 feed. You can skip to the end and leave a response. Pinging is currently not allowed.