Andrelton Simmons Moving up the Rankings 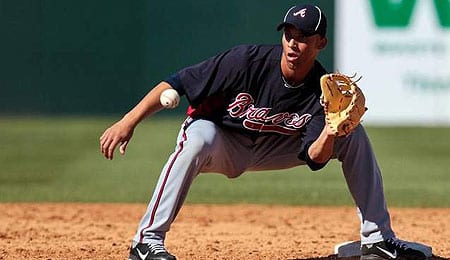 If Andrelton Simmons’ bat ever catches up to his glove, look out.

Heading into the season, we slotted Atlanta Braves shortstop Andrelton Simmons 30th in our Shortstop Rankings.

Clearly, we sold this youngster a bit short, as overall this season he’s easily been a top 20 and could even be a starting shortstop in larger format leagues (16 teams or larger), although he’s currently playing like bench fodder.

Atlanta first-base coach Terry Pendleton – who played with Ozzie Smith for many years – sure thinks the world of Simmons.

“[Simmons] is just so fluid. It’s like, ‘Put me there and leave me alone, I know what I’m supposed to do.’ Ozzie was that way,” Pendleton says.

While Simmons spent most of the season batting leadoff, he recently lost that role to Jason Heyward and has since dropped to eighth in the order. Obviously, that’s a serious burn to his value, but the fact is Simmons has been tremendously inconsistent this season from an offensive perspective. After struggling in June, he looked like he was really coming into his own last month (five homers, 17 RBI, .287 BA), but he’s completely tanked so far in August (.154 BA, 479 OPS) as the shift down the order seems to have crushed his confidence.

In his first full season. Simmons has been fairly productive and has pitched in with a few steals here and there, but he’s been unable to build on the offensive potential he flashed as a rookie and has wound up on plenty of wires in shallow formats of late.

At this point in his career, Simmons is vastly more valuable in the real world than he is as a Fantasy shortstop. The reason? He’s been simply phenomenal defensively. In fact, he’s been historically good with the glove this year, Yes, Simmons’ glovework is so good that it’s compensating for poor hitting and substandard baserunning. Consider that he currently leads all shortstops with 37 defensive runs saved (which will be the highest ever for a shortstop since the stat came into play 10 years ago). The next best? Pedro Florimon with 14. Just think about that for a moment. (While you’re ruminating over that, the video below will act as Exhibit A.)

Simmons has a rifle for an arm as well.

But we are Fantasy owners and we’re all about the offense.

Well, that remains a work in progress, with few positives to take away. Simmons walk rate is down, his wOBA is substandard, and the only reason his WAR has risen is because of his glovework.

He’s just not developing with this bat this year, but he won’t be 24 until next month, so time remains on his side to an extent.

Simmons’ glove has allowed him to become an established starting shortstop. But we’re going to need to see more offense before this dude ever gets consideration as a starting shortstop in standard formats. If he can hit around .275, steal double digit bases and get on base often enough to be moved back towards the top of the order, then yes, he’ll have a spot in our lineup. For now, Simmons is a solid backup plan.

What do you think? Can Simmons morph into a starting shortstop in standard formats next year? Let us know in the comments below.

By RotoRob
This entry was posted on Tuesday, August 20th, 2013 at 11:36 am and is filed under BASEBALL, Player profile, RotoRob. You can follow any responses to this entry through the RSS 2.0 feed. You can leave a response, or trackback from your own site.