Brandon Beachy Back in Form for Braves 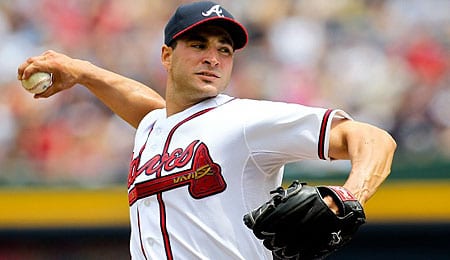 Washington has won five straight games, but big freaking deal. Over the past 10 games, the Atlanta Braves have managed to increase their lead to 14 games – nearly twice as big a lead as any other division leader.

With six weeks remaining in the season, Atlanta could lose two games off its lead per week and still take home the NL East.

Of course, winning 17 of 19 — as the Braves have done — makes it pretty tough to be caught.

Atlanta lost the opener of its three-game set vs. Philly 5-1 on Monday, but roared to take the next two to earn its sixth straight series win. Impressive.

From a Fantasy perspective, hopefully you heeded our advice in May, because if you haven’t jumped on the Brandon Beachy bandwagon, chances are it’s already left town as he’s been one of the hottest pickups of the week. That’s not about to change after a third straight quality start Wednesday, this one his first walk-free outing since his return two and a half weeks ago from Tommy John surgery. After he took a serious bitch-slapping in his season debut, Beachy’s ERA is now down to 4.50 as he keeps whittling away it.

More impressively, Beachy wasn’t merely shutting down the Phillies’ bats – he saved an actual live bat that had flown into the stadium and landed beside his mound (see the video below). Right now, no bat can touch Beachy.

On offense, Jason Heyward is also working his way back into form for the Braves. He racked up his fourth straight multi-hit game (and sixth in seven tries) Wednesday, which included his first home run since the opening day of the month.

We slotted Heyward 12th in our Outfield Rankings heading into the season, but he hasn’t even performed at a top 70 level this year as he’s failed to stay healthy and his overall work at the plate has dipped. Oops.

Well, that’s changing now, and if you bought low on Heyward a few weeks ago, we tip our hat to you. After struggling for the first two months of the season, he started to hit well in June, but that recovery took a hit last month as he managed just a .230 mark (although he was still productive). So far in August, however, Heyward has been the man, finally living up to our preseason billing by showing good patience (five walks already) and tremendous power (.660 slugging). Batting leadoff seems to really agree with this dude as in the 18 games since he’s moved to the top of the order, he’s crushing the ball the tune of a .382 mark with 20 runs and 12 RBI.

Now it’s your turn. Let us know in the comments below, who on the Braves is catching your eye.

By RotoRob
This entry was posted on Thursday, August 15th, 2013 at 11:54 am and is filed under BASEBALL, RotoRob, Team report. You can follow any responses to this entry through the RSS 2.0 feed. Both comments and pings are currently closed.