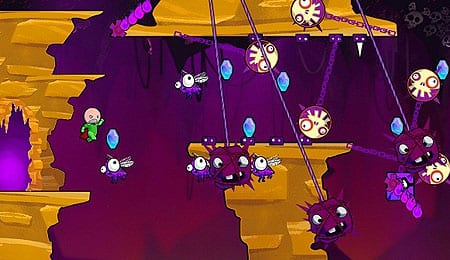 Despite how you’ll feel, Cloudberry Kingdom doesn’t hate you.

Originally seen from Kickstarter by an indie dev named Pwnee Studios and picked up by Ubisoft, Cloudberry Kingdom is a platformer of its own breed. With a unique algorithm in place, no player will ever play the same level twice or even a level that another person has played, and a story mode adjusts you to the chaos that will ensue. The real challenge comes from the peripheral gameplay modes, and the competitive nature buried in every platforming fan. Get Bob to the end, that’s it!

The controls are uniform to the platforming genre and are very tight and responsive, being largely focused on making the millimeter-precise jumps that completely make the game. The character also has very little weight or gravity to him, so as long as you aren’t pushing the stick he will not budge. Jumping can feel a little too rough at first, but the game makes sure that some jumps are only possible if you are jumping blindly with faith. It’s pretty much complaint-free here.

Cloudberry Kingdom is quite colourful and generally very rounded off. The cut scenes in the story mode are done in a way that depicts the world as a papier-mâché land in the sky. While they’re humorous, the cut scenes did have issues with stuttering and sometimes felt like they were out of sync with the audio, but it really is just an inane issue that doesn’t affect anything that matters.

As noted, level design is random and can throw you to underground caverns or lush plains complete with flower patches. The obstacles and enemies you encounter are well drawn and have a very malleable, comical feel. Obstacles will also visually change depending on what type of environment you’re in; for instance, if you’re in a castle, the spiked ball obstacle will look almost rustic. If the environment happens to be covered in snow, the same enemy is now decorated with shards of ice that have formed from assumed inclement weather.

It’s small touches like those that keep the fun constant, and while there’s not a lot of true animation in the enemies there’s so much going on that you’ll have little time to notice. There are also several customizable parts for your Bob in order to tailor him to your liking. You can choose to make him completely invisible, or maybe just a floating head with a handlebar mustache.

The sound effects are pretty sparse, but they effectively serve their purpose without becoming irritating. Most of the attention paid to the audio is in regards to the soundtrack, which is amazing at putting you into an almost trance-like state of platforming bliss. Even though there aren’t many songs, they’re jamming tunes that add to the experience. During the story mode you’ll be treated to some completely intentionally hokey voice acting.

Damn. This game gets hard. That’s the M.O. of Cloudberry Kingdom — be really hard. Thanks to the random level generator that the game was built around, levels will escalate in difficulty and variety the further you progress. It seems like the game will even cut you a break every now and then, as after I died about nine times on a level the following time was considerably easier like the game was saying, “C’mon see? It’s not so baaaaad.”

This game creates a truly unique and memorable experience by providing a constantly escalating challenge to literally anybody that plays it. Not every player will have a bad time with Level 26, but some may be stuck on Level 16, or 41 or whatever. For each gem-scattered level, you need only reach the end. That’s it. Just get to the other side. Chump.

Through each level you’ll want to grab every gem you find. Every gem. If you don’t finish a level with every gem picked up, you’ll not earn your score multiplier. Score multiplier is everything, and it’s devastating once you’ve lost an accumulated multiplier of nine and it resets to one — it’s a feeling only Dark Souls players can really relate to.

If you’re constantly getting thumped by a level the developers offer a little help in the form of “Cheats,” which can be purchased using acquired gems. These powers include slow motion, the illustration of a dotted line to show the suggested path (complete with a circle where your character should be) and finally a computer-controlled playthrough of the level to completion. This is by far the coolest and most entertaining power, as you’ll likely spend hours in free mode adjusting the variables for the level just to watch the computer sail through it without a problem.

Several different types of Bobs are yours to control as well, each tailored to specific types of levels. For variety, Pwnee Studios has a story mode, arcade mode with four sub-modes, including the current crowd favourite “Escalation,” and a free mode where you can set up your own level variables and even edit the power-ups that your Bob currently has. It also has online leaderboards so you can see who is standing between you and the twitch-ridden top.

Cloudberry Kingdom provides a ton of content for only US$10. Once you’ve caught the general grasp of gameplay mechanics, it’s easy to blow two or three hours just grinding through levels, dying, raging, restarting, shouting, and yet still always having a great time.

By Jeff Cater
This entry was posted on Saturday, August 10th, 2013 at 2:32 pm and is filed under Jeff Cater, Video Game Reviews. You can follow any responses to this entry through the RSS 2.0 feed. Both comments and pings are currently closed.