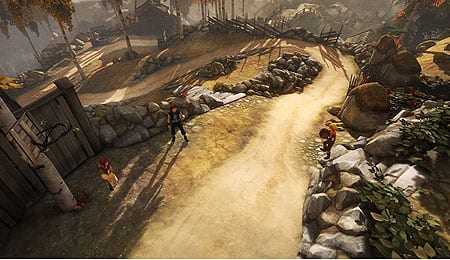 James Naismith? Never heard of him.

I have a little brother. And by one I, of course, mean three. If it ever came to a life or death adventure, it’s safe to say each one of them would be about as useful as tying anvils around my waist and trying to swim across the English Channel.

My family aside, the two siblings starring in Starbreeze Studios’ Brothers: A Tale of Two Sons seem to be far more capable than one would expect. As the starting title of Xbox Live’s Summer of Arcade promotion, Brothers had a lot to live up to, and fortunately, it more than fits the bill, crafting a surprisingly powerful story about two brothers on a journey to save their father from certain death.

Brothers does something pretty interesting in making a co-operative game into a single-player experience. You control both brothers simultaneously, one set to the left and right sticks, respectively, while the corresponding triggers act as the action button. The only other real function beyond that is camera control, which gets the job done well enough to not be a nuisance.

That’s not to say the dual-stick setup doesn’t have its problem, however, as there were plenty of times when what was happening on screen and what I was trying to do with the controller wouldn’t mesh, so I would make mistakes due to thinking the character on the left of the screen was controlled by the left stick, when in reality it was the other way around.

Although not really a serious problem, it comes to a head during one somewhat intense rope swinging section when I was forced to make a very concentrated effort to keep the two straight. Beyond that, grabbing ledges with the triggers during platforming proved to be somewhat troublesome, occasionally missing the input.

In its presentation, Brothers comes across in look and feel like a long forgotten folk tale. From the quaint rustic villages of the game’s outset to more fantastical offerings as you progress, Brothers is constantly displaying jaw dropping vistas and other scenic locales. Plus, with an almost obsessive amount of benches placed throughout the story, you wouldn’t be too far off if you felt as if Brothers is gently encouraging you to stop and soak it all in.

The soundtrack accompanies the visuals to set the mood to an almost masterful degree, giving Brothers a proficient grasp of its sense of tone, capable of turning a heartwarming moment into one of tense desperation in an instant. Something else the game does amazingly well is knowing when to be silent and let the sounds of the environment enhance the experience, whether it be the gentle flow of water or the harsh howl of the wind.

There is a slight language barrier to overcome, however, and without subtitles you’ll largely get direction through on-screen characters’ pantomimes and good old-fashioned inference.

Conceptualized by Swedish film director Josef Fares, Brothers: A Tale of Two Sons sets the mood in its opening scenes, showing the tragedy of a broken family… of an accident that leaves two boys motherless and the youngest traumatized. Sadly, tragedy must strike again with the father falling ill, leaving the boys with no choice but to search for a mystical cure from the tree of life. From the start, the outlook is grim, but the brothers have each other, which is something that’s used to great effect to downplay the somber nature of their journey.

In controlling the brothers simultaneously you get a feel for their connection, of their strength in each other, and certain puzzles and platforming elements certainly build upon this, drawing you closer to each. Puzzles’ often simple but clever solutions can’t help but put a smile on your face, and while the game is anything but difficult it retains a childish charm throughout thanks to its ability to let each brother shine when you least expect it.

There’s almost never a shortage of things to interact with as well. Used more often than not to gain a better understanding of each character rather than offer purpose, you start getting attached to their mannerisms in unexpected ways. Where Brothers gains its greatest strength, however, is in how it handles its story, and the bond between the two of them.

It certainly feels like a fairy tale façade, and from the beginning Brothers is quick to brush off the imminent sense of dread that surrounds the entire tale for the fantastic. The quaint beginnings of the title leave you blissfully unprepared for what lies ahead, and though you might begin by simply distracting a dog to get across a field, you’ll suddenly find yourself climbing a giant’s tower or hiding from an invisible monster in a frozen city.

Brothers is quick to amaze and dazzle, to make every encounter a special and memorable one, for better or worse. At times it feels like a mash up, as if the stories were stitched together at different segments, but it’s done skillfully, interweaving a multitude of stories to create a world that feels larger than life, one that you can’t help but want to explore.

You’ll come across a new area and instantly want to know what happened there, to stop and piece together whatever particular misfortune you’ve come across and try to find a beginning to the story you already know the ending to. Moments of light-hearted joy are set between life or death peril, or, when Brothers is at its best, a profound sense of loss.

Brothers’ conclusion leads up to a complete surprise, one that I foolishly kept waiting for the other shoe to drop on, feeling like there was a “Gotchya” moment that the game was waiting to spring. It’s a moment that never comes, and in doing so, Brothers pulls at heartstrings I didn’t even know it had a hold of yet, invoking serious emotion when I thought none possible.

In a game that hopscotches across the ending of so many other stories, Brothers: A Tale of Two Sons tantalizes us with thoughts of how they began, while at the same time making us fear how ours will end, culminating into one of the most powerful experiences I’ve felt in a game. It’s a title that knows exactly what it’s doing, and it delivers a story more than worth the asking price.

By Justin Redmon
This entry was posted on Saturday, August 10th, 2013 at 5:51 pm and is filed under Justin Redmon, Video Game Reviews. You can follow any responses to this entry through the RSS 2.0 feed. You can skip to the end and leave a response. Pinging is currently not allowed.