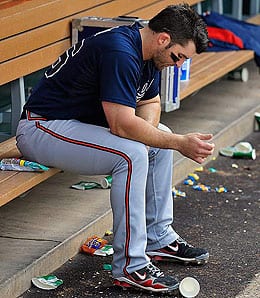 Dan Uggla should be ashamed of his soaring strikeout rate.

Back in a February Podcast, RotoRob Baseball Editor Tim McLeod said he was not banking on a recovery from Atlanta Braves second baseman Dan Uggla.

Now, in fairness, Uggla’s power has bounced back somewhat. He has his most triples since he was a rookie and already has topped 2012’s homer output.

All other indicators, however, are headed south.

Uggla remains a pretty much must-own Fantasy asset based on the runs, homers and RBI – not to mention the fact that he plays a very tough to fill position.

After all, no NL second baseman has more homers (and he’s tied with Robinson Cano for the most jacks by a keystone corner man in all of baseball). However, with a sub-Mendoza BA, Uggla is by far the worst hitting player at his position in the game.

After a simply horrific start to the season, Uggla seemed to be getting his act together for a couple of months, but despite enjoying his best power month in July, the rest of his numbers took a powder. So far in August (1-for-7) things have not changed.

Unlike last year, more of Uggla’s doubles are leaving the yard, but the continually shrinking BA (combined with a reduced walk rate) has left him with a substandard .315 OBP, thereby mostly offsetting his power rebound. Can someone please explain to me how this dude had a 33-game hit streak two years ago?

Hell, things are so bad now that even when he gets on base, he’s screwing up. On Wednesday, for instance, Nolan Arenado airmailed a wild toss to first on a routine grounder by Uggla, allowing him to reach. But when the throw got away, Uggla cut towards second base, putting him in play, and the ball ricocheted right to first baseman Wilin Rosario, who was easily able to nab Uggla, now a dead duck between first and second (see video below). Pathetic. In the same game, Uggla got thrown out at the plate, which was pretty much the only thing that went wrong that day for the Braves in a 9-0 win.

Still, we are talking about a second baseman that has gone yard at least 20 times in every season of his eight-year career (except last year). That kind of power consistency ensures that Uggla will remain a must-own player. Just be sure to load up on high average types to compensate.

Now it’s your turn. Tell us what you think Uggla’s final BA will be this season. Leave your prediction in the comments below.

By RotoRob
Tags: Atlanta Braves
This entry was posted on Saturday, August 3rd, 2013 at 10:44 am and is filed under BASEBALL, Player profile, RotoRob. You can follow any responses to this entry through the RSS 2.0 feed. Both comments and pings are currently closed.