Matt Moore’s Bubble Bursts as Rays Knocked Out of First 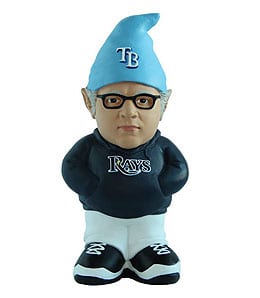 Rays Manager Joe Maddon is now a gnome — yup, he’s made it.

Tampa Bay’s grip on first place in the American League East was short-lived, but make no mistake – this team is on a major tear and there is no one playing better in the entire AL right now.

The offense has been much better than we ever expected – in fact, my assertion that their sticks were surprisingly good started several massive threads on Twitter that didn’t seem to want to die.

The pitching hasn’t been nearly as dominant as it was last year, but still ranks second in the majors in BAA and fourth in WHIP, even if the bottom line results have been somewhat middling.

Manager Joe Maddon again has this team in contention and he’s going to be rewarded by having his own Gnome Day on Saturday. You know you’ve made it when…

Tampa Bay was unable to wrap up its weekend sweep over the Yankees Sunday, thanks to the jolt of energy Derek Jeter (that first-pitch home run, which you can see below, was the stuff legends are made of) and Alfonso Soriano gave to the Pinstripers, but winning two out of three in Yankee Stadium is nothing to be ashamed of.

Rays starter Matt Moore, who has been absolutely electric for about six weeks, took a bit of a beating, giving up eight hits (two homers) and five earned runs over five innings to have his six start winning streak snapped.

Moore, a graduate of our 2012 Top 55 Prospects, has been doing a way better job of keeping the ball in the yard this season. In fact, he hadn’t served up a gopher ball since getting molested by the Orioles on June 9 before surrendering jacks to both Jeter and Soriano Sunday.

The southpaw remains under team control through 2019, and once his command finds consistency – look out.

Reliever Jake McGee’s generally disappointing season continued as he coughed up two hits and two runs in 1 1/3 IP to take the loss. We slotted in the top 45 in our Relief Pitcher Rankings heading into the season, but he’s barely been a top 125 reliever so far.

However, the truth is his struggles were mostly limited to the first two months of the season. McGee got on a major roll from June on. He’s logging more innings this season, and while his ERA has regressed and his control hasn’t been nearly as sharp, he’s carved out a more responsible role in the Rays pen.

So if you’re in a league that tracks holds, McGee has value. His strikeout rate remains robust, and we find it very telling that when Fernando Rodney was overworked earlier this month, it was not top set-up man Joel Peralta or the untouchable Alex Torres that Maddon turned to when a save chance emerged. It was McGee. It’s definitely some food for thought should Rodney implode or get hurt.

Now it’s your turn. What do you think? Will the Rays overtake the Red Sox and take home the AL East? Let us know in the comments below.

By RotoRob
This entry was posted on Monday, July 29th, 2013 at 9:57 am and is filed under BASEBALL, RotoRob, Team report. You can follow any responses to this entry through the RSS 2.0 feed. You can leave a response, or trackback from your own site.