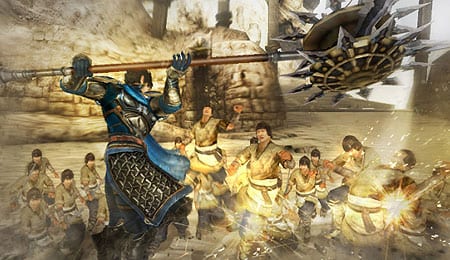 Speak softly, and murder a bunch of people with a spiked-wheel of death.

Dynasty Warriors games have always been easy to pick up and play, and DW8 actually improves on an already near-flawless control scheme. Attacking and jumping are done using the face buttons while blocking and weapon switching are bound to the left and right bumpers, respectively. Clicking in the right stick will activate Rage mode, which beefs up standard attacks and combos while also letting you unleash a “True Musou” attack with the circle button.

Even the biggest pain in the ass about the series has been remedied: horses. Damn it all if it wasn’t the most impossible thing to accomplish, hopping on your horse when you really need to. Now, by summoning your steed with the left trigger and holding it, you’ll automatically mount your chosen ride once it gets within appropriate proximity, which adds to the bad ass feeling of the already bad ass characters. Overall, the controls are responsive and allow you to easily chain together dazzling attacks that take literally hundreds of enemy lives.

DW8 has had a considerable facelift and actually looks like a current-gen game, which isn’t usually a trait for the series. We’re treated to vibrant and colourful characters animated with the attitude and flair the series is famous for — faces are full of emotion and synchronized to the dialogue impressively.

Draw distance has drastically improved, as enemy and level texture pop-in is barely noticeable at all anymore. Environmental variety has also been spiced up a bit with new variants of old battlegrounds. They won’t exactly “wow” anybody, but they look absolutely great for the franchise — and in a game about slaying thousands of warriors the detail of the blades of grass are the least of your concerns.

Boiled down, the attacks look fantastic, and the characters look amazing performing them. This creates an intense, explosive feel to the battles. Characters get lightly bloodied and dirtier as battles progress as well, but it’s barely noticeable with everything else happening on the screen.

The in-game dialogue is truly a mix of good and bad. Some characters sound sufficient, even great at times, whereas others sound staged and ill-fit for the character being portrayed. It was cool hearing the English pronunciation of some of the characters that I’ve never known how to say as well. The mix of butt-rock and traditional Chinese music returns and is in full swing. After initially dismissing it as generic rock, it actually holds up as good tunes with Asian influence and meshes perfectly with the chaos of every battle.

Odds are if you’re reading this review you’ve probably played at least one, if not many Dynasty Warriors titles, so what you really need to know about this game is: yes, it retains the hack-‘n’-slash melee combat it has always been the best at. In fact, it has actually improved it by adding a new system in which certain weapons will do more/less damage depending on an exclamation point above an enemy officer’s head (a disadvantage) or a blue octagonal crystal denoting that you have the advantage.

If attacking an enemy while at a disadvantage, you can time a weapon switch perfectly while they wind up a switch attack of their own and perform a counter that stuns them. Now, if you have the advantage over your opponent, the blue octagon starts to fall apart. Once depleted completely, you’ll unleash a fury attack against the officer, swinging furiously at him and anyone unlucky enough to be within 15 feet of him. Every officer also has a signature weapon, which grants bonuses in the form of stronger, prolonged combos when used.

Weapons also have an affinity of three varieties in the form of Man, Heaven and Earth — all grant different bonuses like faster health regeneration or quicker filling of your rage meter. What about the Yellow Turban Rebellion, again?, you say. Yes, encounters remain familiar as they’re all based on historical battles and such, and they’re featured in many previous games.

Since a ton of level variety has been introduced, however, there’s still a welcome breath of fresh air to be taken in while playing Dynasty Warriors 8. Having played the series since the second installment and being very familiar with the environments, DW8 blew me away at how lost I felt during missions that I have done time and time again.

In addition to the campaign that allows you to see the evolution of China through the eyes of the Wei, Shu, Wu and Jin kingdoms (others are also unlockable, as there are over 70 playable characters), Free Mode makes a return from its absence in the seventh game, and a new mode called Ambition has been implemented.

Ambition Mode is somewhat of a Empires-lite version of any of the DW: Empires series in that you select an officer and start completing missions and recruiting other officers by defeating them in battle. Fighting progressively without taking a town-break in between allows better rewards to be unlocked and more gold to be earned.

Dynasty Warriors 8 is what longtime fans have been waiting for: visceral combat, countless enemies, rocking tunes, 70-plus characters and three modes worth of replayability. Tecmo/Koei cares. It shows. The only thing keeping this from a perfect score is Lu Bu hasn’t calmed down at all, and he’s still a jerk to everyone he talks to.

By Jeff Cater
Tags: Video Game Review
This entry was posted on Thursday, July 25th, 2013 at 9:58 am and is filed under Jeff Cater, Video Game Reviews. You can follow any responses to this entry through the RSS 2.0 feed. Both comments and pings are currently closed.