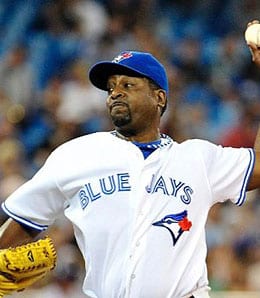 Darren Oliver was at the centre of the Jays’ latest collapse.

It was shocking how many analysts were ready to pretty much hand the World Series to the Toronto Blue Jays this year after their huge splash in the offseason – even if many of the moves they made were very questionable and extremely risky.

Things certainly didn’t start out auspiciously as the Jays were 10-21 in early May and were still nine games under .500 in mid-June. Then, just as suddenly, Toronto rhymed off 11 straight wins to move over .500 and vault themselves back in the picture.

Finally, this team was coming together and reaching its potential, right?

The Jays went right back into a tailspin after that huge winning streak and had returned to a losing record by the end of June. Things haven’t turned around this month, and after completely blowing a huge lead against the Dodgers Tuesday, the club has now dropped a season worst six straight games and 13 of its last 17.

Toronto now finds itself seriously buried in the AL East cellar, seven and a half games behind the fourth-place Yankees, who are spinning their wheels themselves lately.

With eight teams above them in the Wild Card race, a playoff appearance is looking highly unlikely for the Jays.

Well, the offense has shown flashes (seventh in runs, seventh in slugging), but a middling team BA is holding it back somewhat. The pitching has been abysmal by virtually any measurement. Well, that’s not totally fair. The bullpen has been very strong, but the rotation has been so awful, there’s been no way to sugar coat this pitching staff.

One of the theories I’ve heard suggested is that there is a leadership gap in the Jays’ clubhouse. Well, the team had a 70-minute players only meeting before Tuesday’s game and promptly came out swinging, taking an 8-3 lead through six innings over a Dodger squad that is hotter than anyone in the bigs – especially on the road.

However, the Jays somehow managed to fritter that big lead away, losing 10-9.

Well, if it isn’t, Jays fans might want to avert their gaze.

Right now, it seems like this team has quit on each other, and that’s untenable at any time, never mind in late-July, with over two months of the schedule remaining.

It was Darren Oliver who imploded Tuesday, but cut the old guy some slack. Since returning from a shoulder injury last month, he’s looked very steady, even if his hit rates are up this year.

What prompted the lengthy players pow wow was a truly ugly showing Monday in which the Jays committed a ridiculous five errors en route to a 14-5 pasting at the hands of the Dodgers. The Jays don’t seem to want to discuss publicly what was said at that meeting, but you get the sense that there are players on this team that are getting fed up with underachieving.

Speaking of underachieving, there are some issues on this team:

The Jays may have just shifted into seller mode after this debilitating setback. At the very least, they are unlikely to be buyers now. Perhaps standing pat is the best thing for this organization, some fans of which might now be wishing the Jays had done a bit more standing pat in the offseason.

As Buehrle – one of the big acquisitions in the winter – recently summed up about the Jays fortunes so far: “maybe we were overrated, maybe we’re not as good as we thought we were.”

Well, that pretty much says it all, folks.

Now it’s your turn. What do you think went wrong for the Jays this year? Let us know in the comments below.

Crave more in-depth Fantasy analysis? Then join us every Thursday at 9 p.m. EST for RotoRob’s Fantasy Baseball Weekly Podcast on Blogtalkradio. Tim McLeod and RotoRob will entertain and edify you for a half hour or more each week. Tim is off this week (July 25), but RotoRob Hockey Editor Chris Wassel will take his place. Tune in here.

By RotoRob
This entry was posted on Wednesday, July 24th, 2013 at 12:51 pm and is filed under BASEBALL, RotoRob, Team report. You can follow any responses to this entry through the RSS 2.0 feed. You can leave a response, or trackback from your own site.