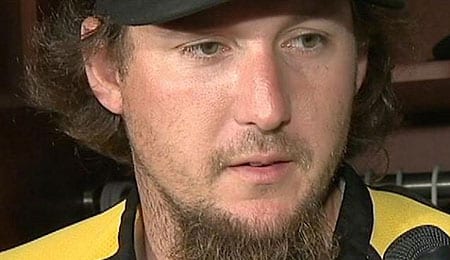 Joel Hanrahan is going to be sidelined for a while.

RotoRob was off this week with both the Blackhawks and Penguins in action Thursday, but to compensate for this loss, Tim returned from his trip after missing the past two weeks. To make things even more special, actor Ian Kahn made another appearance, joining Tim in RotoRob’s stead.

Tim being Tim (which means serious technical deficiencies — he makes those who endured years of flashing 12s on their VCRs seem advanced), the show got off to a rocky start. So ignore the dead air at the beginning and then bask in Tim’s technophobia for the next 60 seconds or so before the pair finally kick off the show.

Listen to the Podcast in its entirety by clicking the play button below. It’s so simple, it’s Tim-proof.

By RotoRob
This entry was posted on Friday, May 10th, 2013 at 1:17 pm and is filed under BASEBALL, Ian Kahn, Podcast, RotoRob's Fantasy Baseball Weekly, Tim McLeod. You can follow any responses to this entry through the RSS 2.0 feed. You can leave a response, or trackback from your own site.