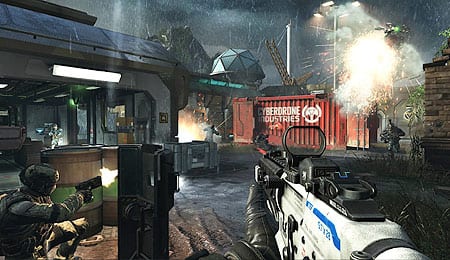 It may be a remake, but Uplink is still damn good fun.

Coming off a very strong effort with Uprising, Treyarch is back with (a) Vengenace, which follows the standard Call of Duty DLC playbook: four versus maps, a new zombie locale and weapon, all at the asking price of 1,200 MS Points (US$14.99 when it hits PS3). Once again I have spent a few evenings putting the new maps through their paces whilst words like “cheater” and “noob” (and a few other, less appropriate ones) echoed through my home. Here are my thoughts.

Snipers and assault rifle aficionados should be pleased by Cove — a map that despite a modest amount of square footage still manages to promote long-range fighting thanks to a clever layout. Of course, that limited amount of real estate means the run and gun crowd can excel, too, as paths snake throughout the enclosed island, allowing those in perpetual motion to get the drop on their opponents. The fighting tends to congregate on the beach area with players using the rocks and plane crash debris for cover before continuing to encircle the map.

I really enjoyed Cove. The whole vibe with blue water and lots of palm trees is aesthetically pleasing (not to mention wholly different from the other maps), and the design made it an intense experience for all different play styles in both Deathmatch and domination.

Set on a severely damaged suspension bridge, Detour offers up split-level combat with the middle area essentially existing on one elevation and flanking opportunities dipping below. There are a handful of spots to find enclosed cover (a mobile command centre, a maintenance room, etc.), but for the most part this map feels designed to encourage frequent repositioning. It also boasts some outer walkways similar to Vertigo, where you sacrifice cover for the chance to circumvent your foes.

The multiple paths and levels can create some confusion, and I mean that in a good way as opponents and teammates are employing a lot of different routes to get around. To quote Brad Pitt from World War Z, “movement is life.” Still, the setting feels overly familiar, and I definitely felt that it could’ve really benefited from some increased acreage.

In the final line of our Uprising review I suggested that it’d be nice to see fewer gimmicks with Treyarch’s next assortment of maps. Apparently it didn’t get the memo as Rush is set in a paintball establishment with a smallish indoor section and larger, two-tiered outdoor zone. In a lot of ways it feels like a less creative version of Studio, which took a silly gimmick of being on a Hollywood back lot and turned the volume up with all manner of goofiness.

With Rush, however, I never felt like it was a particularly inspired effort with things like two elevated sniper positions that have big windows facing one another. The indoor section is forgettable as well, and being that it’s off to one side of the map it’s frequently uninhabited, serving as a transitional area rather than a combat destination. Rush isn’t terrible. It just doesn’t bring anything new to the table.

Rounding out the adversarial portion is Uplink, which is a slightly modified remake of the Black Ops map, Summit. Viewed on its own merits, it’s hard to argue with Uplink’s quality. The blend of indoor and outdoor elements is excellent, and the multiple levels, paths and defensive positions make it every bit as frantic as you remember it. And therein, of course, is the issue. This is Summit, only with a mountain setting instead of the snow and some cool rain effects reducing vision.

Obviously this is not a new phenomenon — no doubt many remember when Lockout became Blackout in Halo 3, or even Studio, which was a remake of Firing Range — but it’s still a bit of a gray area when the maps are so similar. Whether or not its inclusion bothers you at a philosophical level, Uplink remains a very strong offering when you’re actually playing.

After Mob of the Dead departed from the original cast, that crew is back in the saddle for the latest addition to Treyarch’s ultra popular zombies mode. Buried is set in a subterranean Old West town with all the era-specific stereotypes one could hope for (a saloon, a jail, a bank, etc.). It’s a massive location teeming with various pathways, many of which instill a very claustrophobic vibe — more so even than Mob’s Alcatraz setting. While not great, Buried is a worthwhile addition.

A new gun has been added as well: the Ray Gun Mark II. It’s a powerful, certifiable ass kicker that shoots in three-round bursts. Fans of the zombie killing experience will be pleased to know that the new weapon is retroactively available in all previous maps so you don’t need to be playing Buried to enjoy the added firepower.

We’re now three-fourths of the way through Black Ops 2’s downloadable lineup, and Vengeance slots comfortably into the middle position for me as I prefer it to Revolution but rank it behind Uprising. Cove and Uplink are a blast (even if the latter is a remake), and the rest range from decent to quite good. If you’re itching for some new maps, feel free to contact the replacers.

Thanks to the folks over at Activision, we’re giving away a couple codes to download the new Vengeance map pack! To enter, simply post a comment below telling us which map you’re most excited to play. Also, include your @Twitter handle if you have one. If not, just make sure the email you use when posting is valid so we can contact the winners.

Winners will be selected on Thursday, July 18. All entries must be submitted by 5 p.m. EST/2 p.m. PST on Thursday. Please note that although anyone can enter you must either be following me on Twitter or submit a working email address to win.

By Herija Green
This entry was posted on Tuesday, July 9th, 2013 at 4:57 pm and is filed under Herija Green, Video Game Reviews. You can follow any responses to this entry through the RSS 2.0 feed. Responses are currently closed, but you can trackback from your own site.