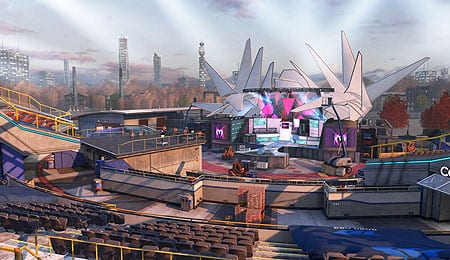 Hello, Cleveland! ARE YOU READY TO ROCK!?!?!

Well, it’s that time again. Time for Activision to roll out a new set of digital killing fields for its latest juggernaut shooter, Call of Duty: Black Ops 2. Priced at 1,200 MS Points, Uprising delivers four new adversarial maps as well as another Zombie addition. After spending a couple days playing the newness (and filling up my swear jar) let’s take a look at what the Uprising pack has to offer.

Our tour of the new maps begins in jolly old England with an open-air amphitheater set up to house an intimate gathering (seriously, how many seats are there in this place? 250?) for a concert. Although the seating area seems like the intended gathering point, players traverse it at their own risk as there are elevated positions on either side (one on stage, the other in an adjacent room) to mow them down. This leads to most of the fighting happening on the periphery.

Of the four newcomers, Encore seems to produce the best domination matches as every single capture point offers multiple angles of attack. For instance, “A” can be assailed from a path, a restaurant, a bathroom and another path. This leads to lots of gaining and losing of points as teams scramble to garner the upper hand.

This one takes place in a Japanese town that has befallen a disastrous outbreak of liquid hot magma, creating an unusual flow of action with no clearly defined combat choke points. On the plus side this setup seems to dissuade camping, but there were times when I’d sweep through the map without finding much action because of the non-traditional design. There are also lots of little shops to duck into and plenty of cutesy Japanese stuff (AKA Kawaii) to give the map some personality.

There are patches of magma littered throughout the map that double as environmental hazards (and yes, mistakes were made), though once you’ve stumbled upon them once or twice odds are it won’t happen again. It’s a solid map that offers a bit of a different flavour than the others.

Fans of the original Black Ops will recognize this as a remake of the Firing Range map with a nice coat of Universal Studios/Hollywood paint applied. This allows for a bunch of film genres to be thrown into the visual blender to great effect as dinosaurs, space aliens, castle sieges and old west saloons (there’s even a miniaturized city) all find a place in this high-intensity map.

A lone tower serves as the centrepiece, allowing snipers a place to provide overwatch. Of course, due to its location it becomes a must check locale as you move around the exterior of the map, ducking into buildings and trying to create tactical advantages with some long lines of sight. This is really a fun map as its silliness somehow vibes well with the all-out action.

Although not billed as a remake, Vertigo will likely remind vets of Modern Warfare 3’s Overwatch thanks to its rooftop setting and overall layout. Action is divided between relatively wide open sections outside the main building and close-quarters combat within. There are opportunities to jump through windows to get the drop on enemies, but for the most part it’s pretty straightforward.

As a Team Deathmatch locale, Vertigo is solid. On domination, however, it becomes a complete cluster — specifically the chaos surrounding capturing and then holding the “B” point. Some might enjoy this intimate fighting, but I didn’t care for it — of course, it’s the same issue I have with Nuketown 2025, and that’s so popular it has its own playlist.

Mob of the Dead (Zombies)

Much like Black Ops’ Call of the Dead, Mob of the Dead once again brings Hollywood actors to the digital world as Ray Liotta, Michael Madsen, Joe Pantoliano and Chazz Palminteri lend their voices and likenesses to Treyarch’s latest undead installment. This time you play as mobsters that are trapped in a demonic version of Alcatraz. Theoretically the goal is to reach the rooftop and escape via a makeshift plane, but unless you’ve assembled a crack team odds are you’re just happy to survive as long as possible. It’s a cool setting with narrow paths than lead to plenty of bottlenecking… also, there’s a hidden Johnny Cash song, so that doesn’t suck.

While most of the mode is old hat, there is one new twist. Once killed you actually enter an “afterlife” where you can still destroy zombies to aid your surviving teammates. No points are earned during these moments, however, and since they’re what’s needed to upgrade your arsenal and/or advance it’s a tactic that can be used in a pinch but not relied upon.

There’s some good stuff in Uprising, most notably Studio and Encore, and fans of zombie killing should find the new entrant enjoyable thanks to a cool location and new gameplay element. Still, it’d be nice if Treyarch could offer up some larger, less gimmicky maps in its third pack.

Thanks to our home slices over at Activision, we’re giving away a couple codes to download the brand new Uprising map pack! To enter, simply post a comment below telling us which map you’re most excited to play. Also, include your @Twitter handle if you have one. If not, just make sure the email you use when posting is valid so we can contact the winners.

Winners will be selected on Wednesday, April 24. All entries must be submitted by 7 p.m. EST/4 p.m. PST on Wednesday. Please note that although anyone can enter you must either be following me on Twitter or submit a working email address to win.

By Herija Green
This entry was posted on Friday, April 19th, 2013 at 2:17 pm and is filed under Herija Green, Video Game Reviews. You can follow any responses to this entry through the RSS 2.0 feed. Responses are currently closed, but you can trackback from your own site.