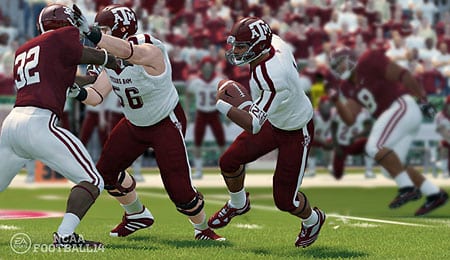 This is a big year for the Madden franchise, which is celebrating its 25th anniversary and is set to debut on the Xbox One and PlayStation 4 with EA Sports’ new Ignite engine. Its little brother, however, has seen no such fanfare as NCAA Football ’14 hits shelves this week with no plans for a next generation release. Thankfully, that doesn’t mean improvements and additions haven’t found their way in.

With the read option gaining lots of momentum recently thanks in large part to the success of NFL clubs like the San Francisco 49ers and Seattle Seahawks, it’s not unexpected that the focal point of this year’s offensive overhaul is the option. To its credit, NCAA Football ’14 has done a really good job as it now identifies the defenders you need to watch to make the proper read… for example, if the defender charges your quarterback, pitch the ball to the back. Conversely, if he’s waiting for your back it’s time to run the ball yourself. It’s essentially a game within the game, and it works.

In addition to the option overhaul, the game has also modified the function of the right stick with combinations allowing for specific juke moves to evade defenders. Plus, in conjunction with the new game engine, flicking the stick up or down at specific times will affect your balance as well as your ability to gain a few extra yards by pushing the pile. Kinect support has been added in the same way as last year’s Madden, allowing you to call out audibles.

Pre-canned tackle animations have been ditched in favour of the physics-based Infinity Engine 2, which ostensibly allows things like size, speed and momentum to factor into the outcome of every collision. It’s a nice change that makes plays feel more organic and keeps them fresh even as the hours with the game start to add up. Player movement and fluidity typically look smooth, though during the Road to Glory mode I noticed some odd, jagged cuts from CPU-controlled players with the ball.

While player models look good and uniform colours are vibrant, the crowds and sidelines look just as bad as ever with lifeless cutouts inhabiting both areas. The overall presentation isn’t great, either. Sure, it duplicates many of the ESPN elements (such as the little intro jingles and ever-present ticker across the bottom, which even includes score alerts), but it doesn’t feel on par with some of the better sports titles. For instance, the studio updates come across as disjointed and awkward with the dialogue sounding pieced together. Commentary remains respectable.

One surprisingly useful addition is the new playable camera angles. Most notable is the Coordinator perspective, which offers a bird’s eye view of the field, allowing you to see almost sideline to sideline before zooming in as the play unfolds. As someone who has played football games at the default view for more than a decade, I was shocked at how much I enjoyed it; the tradeoff, of course, is that you lose some of the detail and “feel” of being on the field, but it’s worth it for the increased vision.

Ultimate Team, a longtime inclusion in series like Madden and FIFA, finally makes its NCAA debut in this year’s release, offering up the same experience you’ve seen before. Here you build up a team from scratch by purchasing card packs that contain increasingly talented players. Obviously, since amateur athletes can’t have their name or likeness appear, all the cards are of current or former NFL players circa their college days. Their skills are also based on their collegiate exploits, so don’t be shocked when Tim Tebow outranks Aaron Rodgers.

As in other games, Ultimate Team remains a multiplayer-centric mode, and in fact even single-player games require an online connection to the EA servers. Playing against the A.I. in short, two-minute quarters is primarily there to build up the quality of your lineup by completing a series of challenges, starting with you competing against schools from smaller conferences. Win those and you’ll keep progressing as the level of your opponents grows along with you. It’s never been my favourite, but if you’ve enjoyed it before this iteration appears well done.

Road to Glory returns as the game’s solo career mode, and as far as I can tell it has done so literally unchanged. You still guide your player through high school, choose a college team and go about climbing the depth chart and earning your coach’s trust with your performance in practice and games. This is Year Three since the redesign and it’s already starting to feel a bit long in the tooth with the repetitive, unrealistically player-focused play-calling really hurting the mode’s authenticity.

Dynasty, on the other hand, has undergone a couple notable changes to the off-field activities with the addition of Coach Skills and the evolution of Power Recruiting. Coach Skills creates a little RPG flavour for your program’s coach (created or actual) as they earn experience points that can then be spent on unique abilities as game managers or recruiters. There are also offensive and defensive trees for your respective A.I. coordinators.

How it works is that various activities (winning games, scoring touchdowns, unearthing an underrated prospect, etc.) reward you with XP. Earn enough and you’ll level up — at that point you can invest in any of a number of tiered skills. Each skill has three different levels of proficiency and you’re free to assign your points however you wish — you can also respec your choices during the offseason. It’s a solid addition that gives you something else to strive for as the seasons wear on.

Power Recruiting is basically a streamlined version of the previous process as various activities have now all been rolled into one pool of points. You then assign as many points as you’d like (up to 500) on recruiting a player while his relative level of interest in what your school has to offer is reflected in a weekly bonus on top of the points you invest on them. Ultimately you’re still doing all the same things, but the new approach should at least save some time along the way.

Online play, both head-to-head and dynasty, is available, though given that the game hasn’t been released yet I wasn’t able to invest any time in them. Based on previous years, however, the EA servers tend to be well populated and are rarely saddled with noticeable lag.

Similar to last year, NCAA Football ’14 again makes strides in several areas (new engine, much improved option play, revamped coaching and recruiting) while continuing to tread water in others (Road to Glory, unrealistic passing accuracy). It’s a modest net gain for the franchise, but I will be keenly interested to see if they have anything truly exciting up their sleeves for the jump to next gen.

By Herija Green
This entry was posted on Monday, July 8th, 2013 at 11:22 am and is filed under College sports, FOOTBALL, Herija Green, Video Game Reviews. You can follow any responses to this entry through the RSS 2.0 feed. You can skip to the end and leave a response. Pinging is currently not allowed.