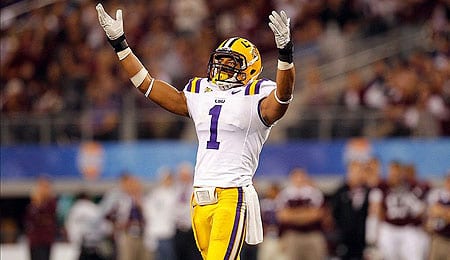 LSU’s Eric Reid is going to make the 49ers’ D even stronger.

By Daniel Olson and Josh Johnson

The 2013 RotoRob NFL Draft Kit surges forward today like an unstoppable beast, bringing you yet another cheat sheet. So while the grand jury deliberates the Aaron Hernandez case, let’s review the top 20 team defenses for Fantasy football in 2013.

Unless you have been in Antarctica for the last year, you know the Baltimore Ravens won the 2013 Super Bowl. So defense still wins championships, right? When B-More won its first title in 2001, that powerhouse defense basically won it itself, given that Trent Dilfer (!) was the starting QB. Ray Lewis was still the starting middle linebacker in 2013 so they must have had an amazing defense still, right?

A good defense certainly improves your chances (there’s your John Madden comment of the day), but the 2001 Ravens defense that essentially won the Super Bowl won’t be replicated again. This year’s Ravens squad won 34-31 over the San Francisco 49ers. It was in no way a defensive battle. The ‘Niners, by the way, boasted the second best defense in the league this year, allowing only 273 points.

With numerous lawsuits against the NFL by former players and Commissioner Roger Goodell scrambling to look like he cares about player safety, the big hits are gone and it’s become a passing league. Long forgotten is ESPN’s Jacked Up! segment.

Despite the fact the NFL is slowly turning in the NFFL (National Flag Football League), there are still some quality defenses out there that will truly change the game. Let’s take a look at the top 20 for Fantasy purposes.

1. San Francisco 49ers: The ‘Niners are tough to pick over the Seahawks as the top defense in the league, but they boast a ferocious front with little turnover. Their 25 takeaways ranked only ninth in the league with their total sacks also tying for ninth. Their defense, however, ranked fourth in the league with only 94 yards allowed per game. With the additions of Eric Reid from LSU and Tank Carradine from Florida State, you have to expect this team to perform.

2. Seattle Seahawks: The Seahawks have not only the cockiest, but the biggest secondary in the league. Their self-proclaimed Legion of Boom defense produced 18 interceptions last year and only allowed 203 passing yards per game (see video below for more Legion of Boom). This team was clearly lacking on the defensive front, especially with Bruce Irvin’s four-game suspension, so they went out and addressed their needs, signing Cliff Avril, Michael Bennett, and Tony McDaniel. If Chris Clemons can return from an ACL injury, expect this team to impose fear on opposing offenses.

3. Houston Texans: The Texans have had a solid defense for a long time, but many wondered how they would fare after the loss of Mario Williams last season. No problem. They still finished 12-4 and allowed only 97.5 rushing yards per game. Houston’s takeaway numbers dropped as well as its sack total dropped to only 28 on the year. The Texans took two defensive ends in the third and fourth round respectively so they have a great shot to improve on those numbers this year.

4. Cincinnati Bengals: The Bengals had a much better than expected defense last year, managing a monstrous 46 sacks to go along with only 107.2 yards rushing against per game. Adding James Harrison at linebacker should solidify a front seven that will instil fear on opposing running backs. It helps to have a player who isn’t worried about Mr. Rogers emptying his wallet.

5. Denver Broncos: The 2012 Broncos will be remembered for their defensive lapse which allowed the Ravens to complete a game tying bomb and ultimately win the game in overtime. But if you push that aside for a minute, the mile high men had a ridiculous defense on the year. They allowed only 91.1 yards rushing per game but their aging secondary only picked off 11 passes. Champ Bailey is still a quality cornerback, but may have lost a step at age 35. You can expect Von Miller to continue producing at a ridiculous level and pick up some of the slack for the aging cornerback, possibly improving on his 18.5 sacks in 2013.

6. Chicago Bears: How strange will it be watching the Bears play without Brian Urlacher? While he obviously wasn’t the player he used to be, we still assumed he was making a huge impact every time we watched him. It was hard to analyze and critique someone who has had such an awesome career and great impact on the Bears. Chicago will probably be better off without him, boasting a solid front seven, with Julius Peppers expected to improve on his 11.5 sacks and tackle numbers from last year.

7. Tampa Bay Buccaneers: Tampa Bay was a surprise team last year, but it wasn’t because of its defense. It allowed a staggering 380 yards per game and did not force a ton of turnovers (23). But the Bucs may have made the biggest splash this offseason, signing Dashon Goldson to play safety and trading for one of the best cornerbacks in the league, Darrelle Revis. Signing Jonathan Banks to play on the other side of Revis gives them a formidable secondary.

8. New England Patriots: The Patriots gave up a ton of yards per game (373), but actually had an effective team. The signings of Adrian Wilson for the secondary and Tommy Kelly on the defensive line could help increase their takeaway total in 2013. The Patriots will certainly need a boost on defense as their offense might not have the same punch as the last few years.

9. Arizona Cardinals: Don’t blame Arizona’s terrible year on its defense. The Cards’ secondary was second in the league with 22 interceptions and they also recovered 11 fumbles. The offseason saw them waive Adrian Wilson and sign safety Rashad Johnson. They also took a flier on the honey badger Tyrann Mathieu (who hopefully does give a fuck). Adding Alex Okafor at linebacker also helps an already solid defense that should produce in 2013.

10. Tennessee Titans: Tennessee had a pretty terrible defense in 2012, allowing nearly 375 yards per game. However, the Titans improved this offseason, signing safety Bernard Pollard and d-lineman Ropati Pitoitua. With headhunter Gregg Williams as the new man in charge of defense, you can expect a much more ferocious squad. Say what you want about the maniac, but the dude can coach.

11. Baltimore Ravens: The Ravens lost an aging Ray Lewis to retirement and Ed Reed to free agency which slides them just out of the top 10. The signing of defensive end Elvis Dumervil (who will move to linebacker for the Ravens) was huge. Expect him to continue his dominating ways. Haloti Ngata continues to produce and will throw in a handful of sacks and a good amount of tackles for losses.

12. St. Louis Rams: The Rams have a solid nucleus, but finished 30th last year in total defense. Expect a big jump this year as their young talents, such as Chris Long, continue to develop. Throw in a bounce back year from Cortland Finnegan and you could see this being a surprise defense in what might be the best overall division, the NFC West.

13. Pittsburgh Steelers: The Steel Curtain isn’t quite the same with Troy Polamalu aging and James Harrison gone. They were still a top 10 defense last year but just slip outside this year. Outside linebacker Jarvis Jones, their first round pick, should pick up the slack at linebacker and the signing of William Gay at cornerback gives them another veteran presence.

14. Green Bay Packers: If there is one thing Green Bay’s defense did well last year, it was pressure the quarterback. The cheeseheads had 51 sacks, ranking second in the NFL. They added to a formidable front by drafting Datone Jones out of UCLA with their first round pick. Clay Matthews playing more than 12 games this year will be key to this team moving forward on defense. Mark our words, this team will surprisingly miss Charles Woodson, who they waived. He’s got fuel left in the tank.

15. New York Giants: What happened to the G-Men? Their defense was mediocre at best and did absolutely nothing to follow up their 2012 Super Bowl win. Their run defense was 25th in the league, giving up 129 yards per contest. However, they were plus 14 in takeaways on the year, which is something they can build on in 2013. Second round pick Johnathan Hankins should help solidify the defensive line along with free agent acquisition Cullen Jenkins. Overall, this team is trending down on defense.

16. San Diego Chargers: If Philip Rivers wasn’t the best player on the other team every week, this defense wouldn’t have such a raw deal. They were stuck with horrible field position throughout the year thanks to Rivers’ poor decision making. Well, Norv Turner was also their coach. They picked Manti Te’o’s dead girlfriend in the second round so clearly the coaching change had little impact. Excuse me, I misheard that. They actually just picked Te’o… like he’ll be any good. Joking aside, the signing of Dwight Freeney might turn out to be a good one which will cause regret among the other 31 teams.

17. Minnesota Vikings: Uff Da! The Vikings are still playing in what is probably the worst stadium (dome) in the NFL and their defense is slowly aging just about as well. While Jared Allen is by all means awesome, he’s also 31 and not the same player he used to be. We fully expect his sack total to drop from 11 to around five or six this season, assuming he can stay healthy all year. First round pick Sharrif Floyd should be an effective stopgap in the middle of the line, but overall this defense will not be elite.

18. Atlanta Falcons: Atlanta’s offense carried its below average defense last season. The Falcon defense ranked 24th in total yards allowed and produced just 28 sacks on the season. They grabbed a ton of help in the draft, selecting undersized cornerback Desmond Trufant out of Washington in the first round and Robert Alford in the second round. Overall, six of their eight picks were on defense. Free agent acquisition Osi Umenyiora should be a good veteran presence, but overall this will be a young defense that isn’t quite there yet.

19. Cleveland Browns: Will the defense take the Browns to the Super Bowl? Answer: No. The only way these steamers are led by their defense to the Super Bowl is one too many Taco Bell runs (sort of pun intended). Joking aside, their defense wasn’t the worst in the league last year as they were middle of the pack in most defensive categories. Four of their five draft picks were on defense, including Barkevious Mingo in the first round. Free agent acquisition Paul Kruger should help tape up the linebacker corps, but overall this squad should be as average as the whole Browns team is expected to be.

20. Miami Dolphins: The AFC East is wide open this year and if the Dolphins defense can step up, a real challenge might be posed for the Patriots. Expect first round pick Dion Jordan to transition smoothly in the NFL and produce big numbers as a rookie. They didn’t make a ton of noise in free agency this year and will need their returners to step up their production from last season.

By Daniel Olson
Tags: Aaron Hernandez
This entry was posted on Saturday, July 6th, 2013 at 11:48 am and is filed under 2013 RotoRob NFL Draft Kit, Cheat sheets, Daniel Olson, FOOTBALL, Josh Johnson. You can follow any responses to this entry through the RSS 2.0 feed. Both comments and pings are currently closed.