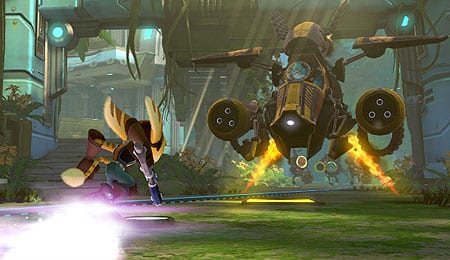 Long before they jumped to Microsoft for Sunset Overdrive, Insomniac Games was banging out annual exclusives for Sony, most notably Resistance and Ratchet & Clank. A decade after Ratchet & Clank first saw the light of day, the duo could be bidding a final farewell (at least to the PlayStation) with Full Frontal Assault. Originally released for the PlayStation 3 back in late November, the game has finally landed on the PlayStation Vita… to mixed results.

Combat and light platforming handle reasonably well, though the camera is pulled in behind you a bit too tightly, which can lead to issues when enemies surround you. Depth perception can also offer some problems with melee strikes and jumps. None of it is enough to seriously affect gameplay, but the option to pull the camera back would’ve been nice. On the plus side, aiming and strafing is fairly precise and easy to handle, and melee fighting consists of just mashing a single button.

On one hand, the cartoonish style and colourful visuals work well on the small screen. They fit the game’s light-hearted theme, and when it’s calm you can appreciate the cutesy designs for both characters and weapons. When things get hectic, however, it can fall apart with the frame rate slowing in a vain effort to keep up with the action. Plus, it becomes difficult to absorb everything that’s going on (the aforementioned tight camera does you no favours here) as effects and projectiles fill the screen.

More serious is the absence of shadows, which makes those moments when you need to platform successfully a chore since you can’t accurately gauge your landing point. There are also times when the game appears very dark — to the point that it can be difficult to make out what you’re looking at.

Beeps, bloops and exotic weapon fire routinely drown out an unremarkable soundtrack during levels, though at least it’s not grating. The voice acting is endearing, and the dialogue possesses a certain cheesy charm to it.

Genre mixing is nothing new in the world of gaming, but Full Frontal Assault’s blend of platforming, shooting and tower defense proves to be an odd combination. On paper it sounds simple: destroy enemies, capture points and collect bolts to build up your defenses. And while truthfully there isn’t a lot more to the game than that, it just doesn’t quite come together the way you want it to.

For starters, you’ll be running around and breaking dozens of boxes to collect enough bolts to construct things like turrets, mines and barriers to keep your own generators safe. There are two problems with this endeavour. First off, it seems like items are too expensive, which leads to you spending too much time tracking down bolts. Second, no matter what you build or how much of it, without your direct presence during assaults, the defenses will not hold.

What this means is that no matter what you’re doing at the time, when the enemy decides to make a push for your base you’ve got to rush back there immediately and take charge. It really is frustrating to watch enemies split your defenses like they’re not even there, and with most assaults happening on multiple paths simultaneously odds are your generators are going to take damage. If all you had to worry about was defense it’d be a non-issue, but since the other half of the gameplay is attacking enemy-held positions it makes for a lot of running back and forth during levels.

Taking the fight to the enemy represents the more enjoyable half to be sure, as the assortment of unique (and oft times absurd) weaponry is fun to unleash. Boxes containing ammo and health refills are readily available, and we rarely found it necessary to retreat until it was time to babysit our defenses. Viewed independent of one another both sections are solid (albeit fairly simplistic), but when combined they become less than the sum of their individual parts.

There isn’t a ton of single-player content in Full Frontal Assault with a handful of missions spread over three planets comprising the entirety. Multiplayer is probably the preferred way to play, but the Vita version contains fewer options to do that than its PlayStation 3 counterpart (obviously local co-op has gotten the axe). Still, the ability to tackle the campaign co-operatively online along with the competitive mode gives this game some extra life beyond the abbreviated single-player mode.

While not a great game, Ratchet & Clank: Full Frontal Assault is a pretty good value for Vita owners, who get both the Vita and PS3 versions (as well as an HD version of 2004’s Deadlocked on PS3 only) for US$19.99. Just be ready for some occasionally frustrating multitasking and inexplicably long load times.

By Herija Green
Tags: Microsoft
This entry was posted on Tuesday, July 2nd, 2013 at 10:20 am and is filed under Herija Green, Video Game Reviews. You can follow any responses to this entry through the RSS 2.0 feed. Both comments and pings are currently closed.