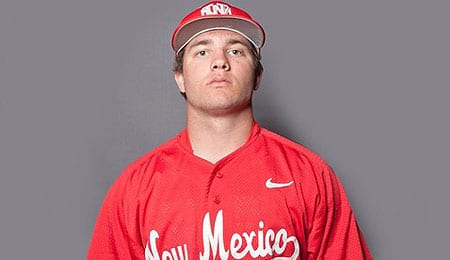 Is D.J. Peterson the answer for the offensively-challenged Mariners?

The 2013 MLB First-Year Player Draft continues Saturday, and today we’re continuing our look at the first round results.

You can find our analysis on picks one through 11 here.

12. Seattle Mariners – D.J. Peterson, 3B/1B, New Mexico: Peterson can definitely hit and is expected to continue to do so at the big league level (of course, the same was said of current Mariner first baseman Justin Smoak when he was picked in 2008). That Peterson wound up in Em City was no surprise, but make no mistake – he’s unlikely to stay at third base, so will probably wind up across the diamond at first. Still, winning the Mountain West Triple Crown last year was a pretty damn impressive feat, and his excellent batting eye should take him far in the pros.

In the video below you can see how quickly Peterson gets the bat through the zone.

13. San Diego Padres – Hunter Renfroe, RF, Mississippi State: After focusing on pitching in 2012, this year the Padres were all about the sticks. One of four Bulldogs selected in this year’s draft, Renfroe flashed serious power at college, where he continues to compete as Mississippi State seeks a spot in the College World Series. The 21-year-old was originally drafted by Boston in the 31st round in 2010, but opted to attend college to hone his impressive, but raw skills. Renfroe looks like a Raul Mondesi-type with very nice across-the-board talent.

14. Pittsburgh Pirates – Reese McGuire, C, Kentwood Senior High School (Washington): Signability shouldn’t be an issue with McGuire, so the Pirates probably won’t have a problem like they did last year with Mark Appel. The 18-year-old backstop was a real asset in this year’s draft given the scarcity of top catching talent in this class. McGuire’s defensive skills – and speed – are more impressive than his hitting. Should his bat continue to develop as it has recently, he has a chance to be very special.

15. Arizona Diamondbacks – Braden Shipley, RHP, Nevada: Originally expected to be a shortstop in college, Shipley’s arm was so impressive that he wound up on the mound, and now he joins an already impressive cadre of young Diamondback pitching talent. Clearly, Arizona subscribes to the philosophy that you can never have enough pitching. Shipley, 21, really saw his draft stock soar over the past year, especially after his performance in the Alaska League last summer. His fastball and changeup are his best weapons, and he really does not lack in any one specific area. Unlike most college pitchers, Shipley has a lot more upside than what we’ve seen to date.

16. Philadelphia Phillies – J.P. Crawford, SS, Lakewood High School (California): Jimmy Rollins has held down the shortstop position for Philly since 2001, but in Crawford the Phils may finally have a succession plan. Crawford, a cousin of Dodger outfielder Carl Crawford, is just 18 and is a rare commodity in this year’s draft – an impact middle infield prospect. Better yet, he has the glove to stay at shortstop and the bat to be an above average player at the position.

17. Chicago White Sox – Tim Anderson, SS, East Carolina Community College: The ChiSox have been all about athletic, speedy players in recent drafts, and Anderson continues that trend. Well, he may be athletic, but questions about his arm and bat make some wonder if he’s a legitimate first rounder. Chicago, however, sees Anderson as a top-of-the-order type. He’s good enough to stay at short and be a solid big leaguer, but that doesn’t mean he’s a first-round talent. Keeper league owners looking for a basestealing threat should consider Anderson.

18. Los Angeles Dodgers – Chris Anderson, RHP, Jacksonville University: It’s interesting that Anderson’s pitching role model is Nolan Ryan: “I’ve always watched him. I loved his demeanour on the mound,” the youngster said. What’s curious about this is that Ryan’s last season was 1993 – when Anderson was just turning one. Um, okay. At any rate, Anderson’s mid-90s heat and plus slider should make him a successful No. 2 starter in the bigs. He’s lauded for his bulldog mentality.

19. St. Louis Cardinals – Marco Gonzales, LHP, Gonzaga: When the Cards tabbed Gonzales with the 19th pick Friday, they made him the highest draft pick in Gonzaga history. If there was one area in the draft that was deep it was college pitching – especially left-handed pitching, and Gonzales was at the top of that heap thanks to his athletic ability and superb fastball command. The 21-year-old was a two-way star for the Zags, but there’s no doubt that his ticket to the bigs is his arm.

20. Detroit Tigers – Jonathon Crawford, RHP, Florida: The Tigers traditionally love college arms and with their first opening round pick in four years, they went right back to that well in Crawford. A power pitcher with a nice slider, Crawford’s heater can reach the mid-90s, but his delivery lacks polish and – hence – repeatability. Whether he ultimately winds up in the rotation or in the bullpen is still a big question with Crawford, so he’s a risky commodity in keeper leagues.

21. Tampa Bay Rays – Nick Ciuffo, C, Lexington High School (South Carolina): The Rays have been trying forever to develop a long-term solution at catcher and Ciuffo represents their latest stab at it. He has good offensive skills for a backstop but also has solid receiving skills. Frankly, some consider Ciuffo the best all-around catching prospect in this draft and the fact that he’s a left-handed hitter only adds to his appeal.

22. Baltimore Orioles – Hunter Harvey, RHP, Bandys High School (North Carolina): Baltimore went big in the prep ranks this year, spending its first three picks on high school kids. Harvey, the son of former big league closer Bryan Harvey, generally throws in the 89 to 92 mph range, but has been clocked faster and has a delivery that suggests more velocity is possible. Unlike his dad, he’s expected to be a starter in the bigs and should one day join Kevin Gausman and Dylan Bundy as part of a superb young rotation in B-More.

By RotoRob
This entry was posted on Saturday, June 8th, 2013 at 4:36 pm and is filed under BASEBALL, Draft report, Prospects, RotoRob. You can follow any responses to this entry through the RSS 2.0 feed. Both comments and pings are currently closed.