The Wire Troll: The Dawn of the Nick Franklin Era 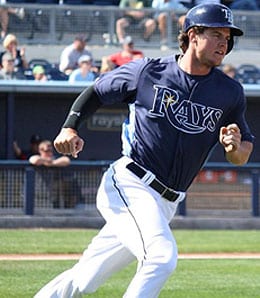 Wil Myers is charging hard towards the bigs.

June has arrived, so we should start seeing the arrival of some prospects that have been held back because of service clock issues. The big name expected on the scene very shortly is Wil Myers, who should be producing in Tampa Bay as he’s simply playing too well to be calling Durham home.

In addition to last week’s injuries in the closer ranks, we’ve also endured our share of less than inspiring performances. Brandon League can’t be long for the job in Dodgertown. Jose Valverde imploded against the O’s Friday, costing Max Scherzer the victory. Poor Jim Leyland will be chaining them back until we see some resolve in the Tiger bullpen. Keep your eyes glued to the news updates as there will be more changes in unsettled bullpens over the coming weeks.

Let’s get to this week’s Troll options.

Nick Franklin, 2B, Seattle Mariners (CBS: 47 per cent owned, ESPN: 14 per cent): The Mariners finally tired of underachieving Dustin Ackley and have turned to Franklin for some offensive help. Franklin showed some pop with a two-homer game against the Padres Thursday (check out his compact swing on the first jack below), but it’s the strong BA and stolen base potential that we should be buying into. Get him rostered and going in all formats for this week.

Wil Myers, OF, Tampa Bay Rays (CBS: 75 per cent owned, ESPN: 13 per cent): Myers has been tearing it up down on the farm, smoking five long balls with 19 RBI and a stellar .341 BA over the last 10 games. He’s chomping at the bit to show off his talents in the bigs, but he shouldn’t have to wait much longer.

Yasiel Puig, OF, Los Angeles Dodgers (CBS: 48 per cent owned, ESPN: 4 per cent): Puig is also hot now, having smacked two homers with 14 RBI, stolen four bases, and a .355 BA in his past 10 games at Double-A Chattanooga. Matt Kemp has hit the DL and Carl Crawford and his wonky hammys could be joining him soon. Many believed that another young phenom, namely Joc Pederson would be the first to get the call but he’s been in a major funk the past couple of weeks so we’re putting our cash down on Puig to earn the promotion. Surely the Dodgers aren’t going to be rolling out Skip Schumaker on a daily basis until Kemp returns.

Mike Moustakas, 3B, Kansas City Royals (CBS: 61 per cent owned, ESPN: 25 per cent): Call us crazy, but if anyone can right the floundering Moustakas it it has to be newly anointed hitting coach George Brett. “Moose” has been a huge disappointment this season with only four homers and an abysmal .177 BA, but in the event a disgruntled league mate cut bait, we’d gamble on a return to at least a semblance of his 2012 form.

Rex Brothers, RP, Colorado Rockies (CBS: 21 per cent owned, ESPN: 23 per cent): Rafael Betancourt’s groin injury has moved from day-to-day status to the 15-day DL so for the next two weeks Brothers is the go-to guy for the Rox. Brothers earned his first save a week and a half ago against the DBacks and despite his tendency to walk a few too many hitters, has allowed only one — yes, one — earned run this season. It’s been an amazing year for the young southpaw.

Luke Gregerson, RP, San Diego Padres (CBS: 15 per cent owned, ESPN: With San Diego closer Huston Street, it’s never a matter of, but when, and sure enough he was DLed Saturday with a strained left calf. Gregerson earned his first save Saturday against the Jays (albeit a shaky one) and should get the lion’s share of opportunities while Street is out.

Robbie Erlin, SP, San Diego Padres (CBS: 3 per cent owned, ESPN: unowned): Erlin’s solid start against the Jays Saturday has vaulted him to the top of the list should the Padres need rotation help down the road, so consider him a worthy stash in NL-only and deeper formats.

David Murphy, OF, Texas Rangers (CBS: 31 per cent owned, ESPN: 25 per cent): After a horrid start, Murphy is now up to seven homers and 24 RBI. He offers solid off-the-radar value.

Nathan Eovaldi, SP, Miami Marlins (CBS: 4 per cent owned, ESPN: unowned): Eovaldi is currently working on building up strength in the shoulder that has kept him sidelined all season. The prognosis is very good, so a return to Miami could be coming soon.

Erasmo Ramirez, SP, Seattle Mariners (CBS: 6 per cent owned, ESPN: unowned): Ramirez finally showed up last week after missing all season with arm issues. After he racked up 48 Ks in 59 IP, he caught the attention of many pundits heading into this year’s drafts and assuming his shoulder holds up we could be looking at two or three more rehab starts before he returns to the M’s rotation.

Jacob Turner, SP, Miami Marlins (CBS: 9 per cent owned, ESPN: unowned): Turner spun seven shutout inning against the Mets Friday, and while the Miami offense is, well… offensive, in deeper and NL-only leagues it’s time to find a home for this young prospect.

Jeremy Bonderman, SP, Seattle Mariners (CBS: 1 per cent owned, ESPN: 1 per cent): It’s great to see Bonderman back in the bigs but unless we see something amazing (and that’s highly unlikely), it won’t be a long visit. We’re betting that he’s simply holding down a slot until we see the return of Ramirez.

Daniel Hudson, SP, Arizona Diamondbacks (CBS: 16 per cent owned, ESPN: unowned): It’s about to get very crowded in the Arizona starting rotation with Hudson just a few more rehab starts away from returning. Wade Miley should be looking over his shoulder.

Tyler Skaggs, SP, Arizona Diamondbacks (CBS: 30 per cent owned, ESPN: 1 per cent): Brandon McCarthy has hit the DL with shoulder issues and will be out at least 2-to-3 weeks, possibly longer. The six innings of shutout ball with nine punchouts that Skaggs threw at the Rangers Monday has guaranteed him several more opportunities, but even if this is just a short-term situation, his huge strikeout potential simply can’t be ignored.

Crave more in-depth Fantasy analysis? Then join us every Thursday at 9 p.m. EST for RotoRob’s Fantasy Baseball Weekly Podcast on Blogtalkradio. Tim McLeod and RotoRob will entertain and edify you for a half hour or more each week. Next week (June 6), we’re off because of the NHL playoffs, but will return on June 13. Tune in here.

By Tim McLeod
This entry was posted on Sunday, June 2nd, 2013 at 1:02 pm and is filed under BASEBALL, The Wire Troll, Tim McLeod. You can follow any responses to this entry through the RSS 2.0 feed. Both comments and pings are currently closed.