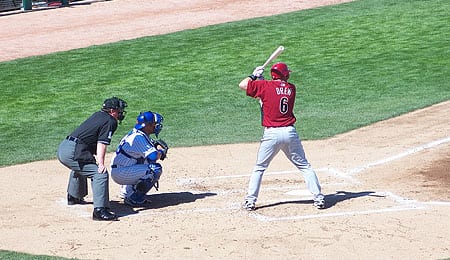 Stephen Drew has really shaken off his hideous start.

Last month, we recommended Stephen Drew as a waiver wire addition as he came off the DL and while it looked like a stinker of a pick at first, it’s starting to pan out.

To say he’s been injury prone in recent years is an understatement, and Drew’s struggles in that regard have continued with a concussion in early March that kept him out of action for the first couple of weeks. He also missed this weekend’s action because of a back woe.

Drew returned Monday, but has gone 0-for-9 since, which is most unfortunate because May has seen him really turn things around after a butt-ugly start. Last month, he scored just five runs with next to no power (.250 slugging). So far in May, however, Drew is doing a superb job of getting on base (10 walks, .370 OBP), and is hitting for both power and average.

A little luck would help Drew shake off his current mini slump. Check out the video below to see how hard he smoked the ball when he was the final out on Monday.

After simply miserable work at the plate in 2012 with Arizona and Oakland, Drew seems to be on the road to recovery with 25 hits in 34 games so far. His extra-base pop has bounced back, but has it come at a cost? Drew is striking out more often than ever before, and if that doesn’t get under control, he’ll be hard pressed to return to the days when he hit for a nice average (.316 as a rookie; .291 in 2008). On the plus side, he’s also walking more often than ever, so even if he can’t get the BA back over .250 or so, at least he’s getting on base at a nice clip.

The incentive is there for a big season. Drew signed a one-year deal in Boston to act as a stopgap until Jose Iglesias or Xander Bogaerts is ready. Whether his future is with the BoSox (doubtful) or another team, Drew has all the motivation he needs to put up big numbers to earn himself a multi-year deal somewhere.

Just a month ago, Drew looked so lost that Red Sox Nation was ready to tar and feather him… especially after Iglesias’ very impressive run as a fill-in. Now Iglesias is back at Triple-A, struggling both mentally (he had to benched for a few games for lack of hustle) and offensively, while Drew is really picking it up.

That’s quieted the masses for now, and has made Drew pretty much a must-own AL-only asset and someone to put on your radar in mixed leagues.

Crave more in-depth Fantasy analysis? Then join us every Thursday at 9 p.m. EST for RotoRob’s Fantasy Baseball Weekly Podcast on Blogtalkradio. Tim McLeod and RotoRob will entertain and edify you for a half hour or more each week. RotoRob will be off this week because of Game Four of the Blackhawks-Wings series, but Tim will forge on, once again bringing on guest host Tim Heaney. Tune in here.

By RotoRob
This entry was posted on Thursday, May 23rd, 2013 at 3:52 pm and is filed under BASEBALL, Player profile, RotoRob. You can follow any responses to this entry through the RSS 2.0 feed. Both comments and pings are currently closed.