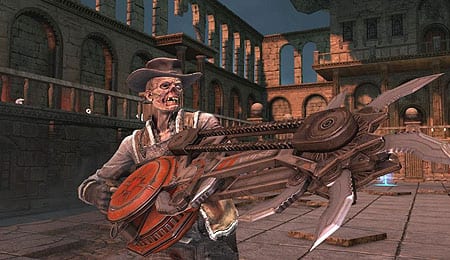 That’s not a knife… that’s a knife!

If old-school games had one thing to teach us it’s that you shouldn’t be afraid to break a game’s rules with cheat codes to have a little fun. In that regard, god mode was the end-all, be-all power up. Under its effects players take down hordes of enemies, tank screen-clearing boss attacks and speed run entire games without breaking a sweat.

Modern games seem to shy away from cheat codes, whether it be due to time constraints or just general aversion to experiencing the game outside their intended rule set. Well, Atlus’ God Mode looks to take you back to arena kill fests with ever-changing rules to keep you frosty. They’re not exactly cheat codes, but God Mode puts a modern spin on the game staple, hopefully bringing some fun along the way.

God Mode plays in a third-person perspective, so tight controls are a necessity to avoid and dish out some damage. Aiming and movement is standard with dodge rolls and sprinting to give some options when things get hectic while short-range melee attacks are available when you get swarmed up close or ammo runs low. Triggers control shooting and aiming, and racking up enough kills lets you unleash abilities to turn the tide in your favour. All in all it’s pretty standard fare with controls, but a few issues make it less than perfect.

With no tutorial, it’s a veritable trial by fire, and although you’ll probably be quick to work the controls out yourself, it’s still a slight annoyance. Movement speed is also a problem — more than likely made slower to make sprinting more appeasing, but even sprinting could use just a little more boost. Rolling, although nice to watch, is far too slow to be useful to dodge most enemy attacks, and you’ll find yourself falling back onto the basic backpedal and shoot strategy for most areas.

Set in Hades (basically Hell in a Toga), God Mode’s theme is apparent from the get go. Monolithic statues and mythological beasts will be the norm here, and although you’ll become well acquainted with the game’s few levels, they each bring a particular charm that can’t be denied. Enemy and player animations are quite robust as well — in particular, the rolling animations you’ll use to dodge come out quite nicely.

Problems do start to show when you notice the texture pop in while in certain areas, and although enemy creatures look nice, there is a definite lack of variety in separate enemies, as God Mode falls back on stereotypes of different colours equaling completely different creatures. Certain on-screen effects are particularly screen obscuring as well and, although nice to look at, shooting at enemies is priority one so any hindrance to that is unwelcome.

Sound design in God Mode is also particularly well done. Weapons come off with a satisfying bang, explosions are a spectacular affair and enemies’ yells and roars add to the experience. The star of the show however is the “spirit guide,” which acts as a narrator for in-game events, with his snarky and playful demeanour and backhanded comments. The real treat, though, is level intros where he divulges the exact situation regarding your arrival to Hades, with things like “home surgery” or “online dating” being your character’s ultimate downfall. As good as the spirit guide is, God Mode is actually quite frugal with the narrative, and throughout the experience you can’t help but wish for more.

God Mode places you in the shoes of a modern day descendant of the gods, and after a rather unfortunate end, you find yourself in Hades, fighting to reclaim your right as an immortal on Mount Olympus. How does one do that Well, fight through the Mazes of Hades, gain enough favour and you just might reacquire “God Mode.” The game comes packed with five levels, each separated into their own mini arenas that end with a gold-packed treasure room. Arenas quickly become loaded with enemies during gameplay, with swarms of creatures like gladiator skeletons, Cyclops, Atlas statues and harpies being just a few of the foes you’ll face.

Constant gun fire, dodging and ability use permeate every battle; it feels good and the experience is all the better for it. However, even the most refined warrior would eventually tire of the somewhat repetitive killing cycle. The monotony of constantly killing creatures is broken up by “Tests of Faith,” which are in-game modifiers that activate when you enter an area. There’s quite a few of them, and they add effects like covering the battlefield in a fog shroud, spawning skeleton allies, random weapon switches every few seconds or — our personal favourite — every enemy wears a hat. They can either help or hurt depending on the situation but regardless of what you get, the game is sure to be interesting.

Out of game, an XP-leveling system gives you access to new weapons and abilities, while gold unlocks weapon upgrades and customizable gear for your character. Weapons come with standard upgrades, ending with an Olympian rank that grants special effects.

Although God Modecan be played solo, four-player co-op is the recommended way to go, and reaching the treasure room together activates friendly fire for player-on-player carnage over gold — however, during my time online no one seemed to care to go after each other, focusing more on collecting gold, which was appreciated.

The experience isn’t as great as it could be though, and some of that has to do with the leveling system. Half of the fun of arena kill fests is the variety of weapons available to the player, and although there is certainly a wealth of weaponry, they’re barred behind level caps that take a considerable grind to reach. The game really hits its stride when you’re given the random weapon Test of Faith, and I feel that the game would improve considerably if weapons were pickups instead of load out selections.

The upgrade system also makes switching to new weapons somewhat undesirable. Upgrading weapons makes it less likely you’ll want to switch even when a new one comes around, and the similarity between them feels less like variety and more like you’re just unlocking version 2.0 of the weapon you already have.

At the end of the day, this is an arena kill fest, and how much fun you’ll have depends on your patience with the genre. However, God Mode delivers in the best ways, being an easily accessible co-op action shooter that’s sure to give you some enjoyment.

By Justin Redmon
This entry was posted on Thursday, April 25th, 2013 at 6:19 pm and is filed under Justin Redmon, Video Game Reviews. You can follow any responses to this entry through the RSS 2.0 feed. Both comments and pings are currently closed.