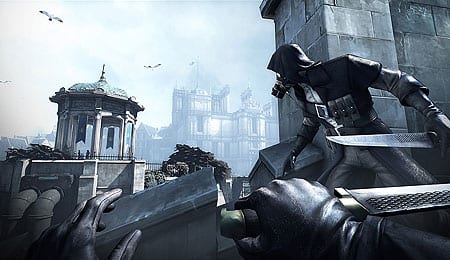 The Knife Of Dunwall puts you in the sneaky boots of the assassin Daud.

If you’ve beaten Dishonored, you’ll probably think that the assassin Daud is a prick. He is, after all, the guy who killed the Empress to open the game, and he’s not exactly friendly in your encounters with him. However, the good folks at Bethesda want you to see him as a conflicted anti-hero, which means a good 5-to-7 hours with Daud in The Knife Of Dunwall DLC.

The Knife Of Dunwall takes place in three parts, the first two of which are new to Dishonored players. The third is a bit of a retread, which is kind of cool to see a familiar place in a different way and kind of lame because you can’t help but wonder if the development budget got squeezed to reuse assets. Regardless, you’ll take control of Daud and there are a few key differences between him and hero Corvo Attano.

First off, Bethesda has integrated money (frequently useless in Dishonored since there’s only so much to spend it on) at the start of missions. Now you can pay off informants to give you hints and help; this leads to additional side quests which are completely optional but give you more reason to traverse the world.

Next, there’s Daud’s actual powers. Take careful note when you do your first set of upgrades because Daud’s setup is a consolidated version of Corvo’s. In short, Dark Vision and the Heart have become one… so have Blink and Stop Time. Therefore, upgrading from the default level to level 2 makes a big difference, so allocate your runes accordingly.

Since Daud is a master assassin with a bunch of underlings, he also has a power that allows him to call for help. These novice assassins, well, aren’t very good and would get their throats cut right away by Ezio Auditore’s Brotherhood. When you use this power, your would-be assassin Blinks into the area and takes on an enemy. He’ll either disappear after completing his mission or he’ll apologize for failing as the enemy takes him out. While they’re not the best killers, they do provide good distractions, and with some creative use of Blink/Stop Time, they can help you get out of a jam.

Daud’s overall movement and weapon set are essentially the same as Corvo’s, so your basic experience is the same as the main game. However, because Daud is still that dickhead who killed the Empress, you may find yourself wanting to play differently than the regular game. Keep in mind that your chaos score still affects the world, and since The Knife Of Dunwall is the first part of a two-part story, you’ll want to be thinking about the big picture as you play.

As for the plot, well, all we’ll tell you is that it takes place after Daud has murdered the Empress, so it’s not really a prequel to Dishonored. It does show a different side of the character (and Michael Madsen’s voice work makes us think that he’s a gruff cop who’s going to retire soon instead of a tired assassin who’s going to retire soon), and one new character affects the story and the world of Dishonored.

For US$10, The Knife Of Dunwall provides reasonable, not fantastic, value and is a must-have for those who couldn’t get enough Dishonored. There’s not a whole lot here that’s new, but the exploration of the world outside of Corvo adds dimension to the game’s experience. Assuming the upcoming The Brigmore Witches DLC is approximately the same length, the total cost will be US$20 for 10-to-14 hours of solid gameplay.

By Mike Chen
This entry was posted on Wednesday, April 24th, 2013 at 1:28 pm and is filed under Mike Chen, Video Game Reviews. You can follow any responses to this entry through the RSS 2.0 feed. You can skip to the end and leave a response. Pinging is currently not allowed.