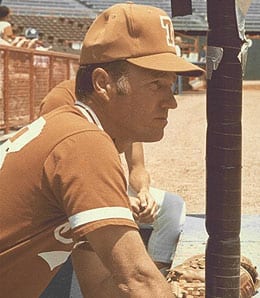 Cliff Gustafson was the man for the Longhorns for three decades.

If Roger Clemens has his way, one of the most successful baseball coaches in NCAA Division I history will be more deeply honoured.

Clemens recently said that his former coach at the Texas Longhorns, Cliff Gustafson, should have his name added to UT’s baseball stadium.

The Rocket may be a suspected cheater and liar, but he has a point here.

Gustafson ran Texas’ baseball program for 29 years, winning 22 Southwest Conference titles and guiding his team to the College World Series 17 times — winning twice (1975 and 1983). He was the all-time winningest coach in college baseball history until his Longhorn successor Augie Garrido broke his record in 2005.

If UT is legitimately considering renaming the stadium, now’s the time to do it, while the 82-year-old Gustafson is still alive to cherish the honour.

Now the question is: will Clemens still be alive when he gets honoured by the Hall of Fame?

By RotoRob
This entry was posted on Tuesday, April 23rd, 2013 at 3:57 pm and is filed under BASEBALL, Fantasy Notes, RotoRob. You can follow any responses to this entry through the RSS 2.0 feed. Both comments and pings are currently closed.