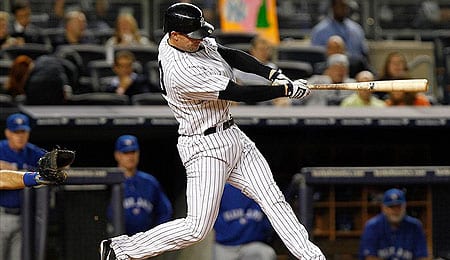 You can add New York Yankees catcher Francisco Cervelli to the list of players denying getting any PEDs from Biogenesis, the Miami clinic that is currently being investigated by MLB.

Cervelli admitted to consulting with Biogenesis head Anthony Bosch about the foot he broke in Spring Training two years ago, but said he only received “suggestions.”

He added: “I just went there, talked, and that’s it. I walked away without nothing in my hands.”

Apparently, Cervelli is unclear on what happens when you use a double-negative. It sure sounds like he’s admitting that he was given something! Besides, we’re not interested in what he had in his hands; it’s his blood stream that we’re wondering about.

Cervelli added that he didn’t receive any treatment at the clinic and that it was not able to help him at all. He added that he now regrets visiting the clinic. Um, no kidding, dude.

However, this contradicts a statement Cervelli released on Twitter a couple of weeks ago: “Following my foot injury in March 2011,” he wrote in the statement. “I consulted with a number of experts, including Biogenesis Clinic, for legal ways to aid my rehab and recovery. I purchased supplements that I am certain were not prohibited by Major League Baseball.”

So did he leave Biogenesis with “supplements” or not?

Cervelli said he had never been offered illegal PEDs.

Cervelli is in a battle this spring to win the starting catcher job, but you’d have to think this saga gives the edge to Chris Stewart and rookie Austin Romine.

By RotoRob
Tags: New York Yankees
This entry was posted on Wednesday, February 13th, 2013 at 3:55 pm and is filed under BASEBALL, MLB Today, Performance enhancing drugs, RotoRob. You can follow any responses to this entry through the RSS 2.0 feed. You can skip to the end and leave a response. Pinging is currently not allowed.