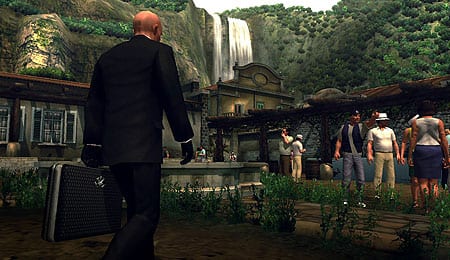 Three-piece suit in a tropical setting? Not conspicuous at all.

With Square-Enix and IO Interactive reacquainting gamers with Agent 47 via last winter’s Hitman Absolution, it should come as no surprise that the companies viewed this as the ideal time to dust off his previous three console adventures with Hitman HD Trilogy. The package includes Silent Assassin and Contracts, arriving on the Xbox 360 and PS3 for the first time, as well as Blood Money, which originally launched on the Xbox 360 and PlayStation 2. That’s a lot of content, but do these games hold up well more than six years after the most recent title released?

Although it’s not uncommon for aspects of older games to feel outdated by modern standards, I have to admit I was taken aback by just how loose the controls in these games felt. Admittedly they improve as you move forward through the set, but basic movement in Silent Assassin can be painfully slow — so much so that I felt compelled to run even at the cost of compromising my disguises… and don’t even get me started on the sneak animation, which might just be the slowest walk in gaming history.

Those that were introduced to the series with Absolution will also quickly notice that 47’s classic tales were skewed much more heavily toward stealth, and as such the shooting mechanics aren’t nearly as precise as what was seen in his newest romp. Aiming down the sight is out, and even things like killing with melee weapons or the fiber wire feel more than a little clumsy.

There’s nothing here that’s going to prevent you from completing missions or totally undermine the enjoyment factor, but you’ll need to accept going in these aren’t cutting edge controls, and therefore concessions must be made.

As has been noted many times, previous gen titles that were made to look “realistic” at the time tend not to age very well, thus their high definition makeovers never have as much impact as when more abstract games with lots of colourful sprites get overhauled. Such is the case here, at least with the two older releases, which both show their age. Certain animations are absurdly over the top, mouths don’t move during dialogue and many locations feel almost barren by modern standards. Thankfully, the less antiquated gameplay helps make up for such graphical shortcomings.

While the visuals may not have aged well, the games’ audio still holds up quite well. The orchestral score from Jesper Kyd, who most recently worked on Darksiders II, remains very good, and the voice acting featured during cut scenes is solid. On the downside, the repetition and annoyance level from in-game chatter on some of the stages is very high.

In stark contrast to Absolution, Agent 47’s earlier exploits are not built to encourage the option between stealth and gunplay. Instead, all three games slant heavily toward the clandestine arts. It isn’t that you can’t use brute force to complete a mission, but the games’ shooting controls are a bit sloppy and make it equal parts difficult and disappointing to square off against multiple gun-toting targets. So, if you’re considering this game for its action, be forewarned that these are stealth affairs through and through, and approaching them any other way undermines the intent.

What has not changed from the series’ console debut until now is that missions can be completed in multiple ways, and if you’re willing to bypass the dozens of walkthroughs on YouTube you’ll find the trial-and-error approach is still the most effective way of proceeding. Each mission is scored on how effectively you took out the target, rewarding you for judicious use of violence and remaining hidden and docking you for reckless killing. The game has cast you in the role of a dangerous assassin, and it expects you to act like a professional during your hits.

These games also take a unique approach to encouraging replay by challenging you to collect weapons from your missions. It’s not enough just to find and pick up a weapon, either — you must finish the level carrying it, which can be tough for larger ones like machine guns and sniper rifles since they cannot be concealed and tend to alert guards.

Speaking of guards, that brings us to easily the most maddening aspect of the Hitman series: the absurdly uneven A.I. Sometimes your enemies seem completely oblivious to your presence, while at others they are legitimately clairvoyant. It is one thing to be recognized because of the bar code on your bald head, but it’s another to be completely covered head to toe in a disguise only to have a guard arbitrarily open fire on you. Perhaps my (least) favourite example was being gunned down by a sniper in a snowstorm while in full camouflage lifted from a guard. It was patently ridiculous.

I’ve already noted that these are stealth games in the truest sense of the word, but it’s worth another mention because the pacing here can be exceptionally slow. Consider this: many levels can be cleared in less than 10 minutes once you know what to do and how to do it. However, much of that time is often spent waiting for small openings such as a guard turning his back or an NPC going to a specific location where he’s alone and vulnerable. If you’re impatient, this likely isn’t for you.

Even with these annoyances, if you take the time to play through all three games you’ll see the growth process as issues are cleaned up on all fronts with Blood Money representing the best mix of pacing, gameplay and (of course) graphics in the group.

Hitman HD Trilogy is an exceptional value as it offers three full games with multiple difficulties and approaches for completing your objectives — the package even includes a code for the Sniper Challenge that served as a pre-order bonus for Absolution — at a bargain price point. As long as you can embrace a patient approach and overlook some occasionally dumbfounding A.I. this is a wise purchase.

By Herija Green
This entry was posted on Tuesday, February 12th, 2013 at 7:31 pm and is filed under Herija Green, Video Game Reviews. You can follow any responses to this entry through the RSS 2.0 feed. Both comments and pings are currently closed.