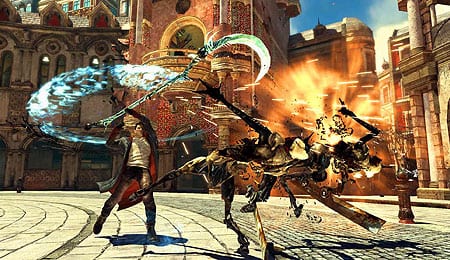 “I don’t like this game, meh!” followed by bitter rage tears of denial.

When it comes to pleasing a hardcore fan base, Capcom has its work cut out for it. After creating over two decades of cherished work, its follow-up titles to the most beloved franchises are always under the harshest of scrutiny. I’ve read the (un)focused cries of many gamers: “Why did you cancel that Mega Man game that I was ready to hate so much?!,”… “How comes Resident Evil 6 so dumb?,”… or my personal fave, “Y U charge me money to play game xtras when it inside disc, me like free things?!”

And then, of course, there’s DmC: Devil May Cry. Developer Ninja Theory has been charged with hating you and your childhood/soul/whatever by rebooting one of the most defining action-adventure series of all time. For starters, it changed the main character Dante’s hair from gray… to black. *snap snap* Nuh uh, no you didn’t, gurl! Thousands of insults and death threats later, Ninja Theory’s work is on display for all of our scathing judgment. Well, I’ve been with the series since Day One, so I felt obliged to stick with my twin guns of fandom and give the new game a shot.

One could bitch, cry and snivel all they want about Dante’s new look but to dismiss how he handles is downright criminal. At its core, DmC follows the classic Devil May Cry routine of juggling firearms with light and heavy melee attacks. The twist in this incarnation is in the duality of Dante’s newly defined bloodline, as he is half-demon, half-angel this time around. (“Waaah!,” cries nobody.) Holding the left trigger will put him in Angel Mode while the right trigger unleashes Devil Mode, essentially acting as a free flowing weapon selection. Pressing in both analog sticks activates the Devil Trigger, which puts the enemies in a slow-mo vulnerable state while increasing your damage and replenishing your life.

Also new to the series is a grappling hook type ability that can pull Dante toward enemies or specific targets when in Angel Mode. Using it in Devil Mode yanks the enemies toward you or can pull heavy obstacles to clear the path. It’s a neat dynamic to the controls as it adds more exploration and secret area potential that has been commonplace in the series. Oh, not to mention it puts one helluva extra gear into the combo engine.

With all of Dante’s abilities combined, combat is at its finest and tightest with a perfect balance of fluidity and hard-hitting mayhem. The physics and speed of the fight is deeply intense yet very welcoming for newcomers at the same time. As you acquire more weapons and upgraded skills, the combo potential is insane with the ability to mix and match your weapons freely, even more so than Dante’s weapon toggling in Devil May Cry 4.

That being said, there are moments in the game when that legacy configuration would have been a nice option to toss in, particularly when facing enemies immune to certain weapons. Another welcome inclusion would’ve been a manual lock-on. The game is pretty good about targeting the closest enemy you’re facing, but when surrounded by a horde, the option to pick your targets freely could have been a great perk. These are minor flaws that become more apparent on the harder difficulties, but odds are by the time you tackle them you’ll be well versed in the ways of Dante.

DmC is a sharp looking game when it counts, which is during the gameplay. The twisted environments and denizens of the netherworld, Limbo, are dark and vicious as well as Dante’s animations and attack patterns. The game’s key boss battles are outstanding action pieces that excel in style and design (just wait for that Bob Barkas stage and battle – excellent!). Also developing the vibe is the harsh industrial metal soundtrack setting the tone just as well as previous installments while also bringing a new edge. It’ll no doubt be razors in ears for some that will incite thoughts of setting your kitchen garbage on fire, but as for me, well, eh, I like it.

Story presentation is where the visuals putter and fail to impress. Textures are washed out in areas, the lighting causes some ugly shadows and the frame rate takes quite a dip during the otherwise well directed cinematics. The voice acting is mostly solid, though the characters’ apathy and calmness in the early chapters don’t come across as such; instead it sounds like everyone’s phoning in a monotone script read. But after pressing past the first five chapters, the actors start putting on a damn good show that doesn’t get as overly melodramatic as the fourth installment. (Who remembers “KYYYYYRIEEEE!” and the tears of justice that followed? Eh, crap, I think I’m tearing up just thinking about it.)

Ninja Theory took a big gamble re-inventing the image and story of a beloved franchise. Knowing it would have to endure barrages of fan hate once it got out that everyone’s favourite silver-haired stud got a slim, young, dark hair makeover, it said “Eff it, we’re doing it anyway!” But after taking DmC for the whole ride, this die-hard fan has got this game’s back. Sure, it’s guilty of carrying the clichéd modern reboot mentality (“Snap, it’s like the original… but grittier!”), but thankfully it succeeds in capturing the spirit and attitude of the series. Deep, rich combat with a wide library of weaponry filling up a 20-chapter campaign with multiple degrees of difficulty laced with tons of unlockables — through and through, this is Devil May Cry.

In DmC, Dante gets approached by a mysterious psychic named Kat who knows about his ability to interact with the realm of Limbo where demons dwell behind the scenes of mankind. From there he partners up with his long-lost twin brother, Vergil, who plays the role of a digital revolutionary set on unveiling to the public that the world is controlled by Mundus, a demon lord who enjoys Kingpin cosplay, creating world debt and disguising succubus vomit as energy drinks. Chaos ensues, the balance between reality and the demon realm constantly shifts, They Live-inspired hidden messages are unveiled — oh, and you get opportunities to juggle monsters in the air with a sword, carry them up via rapid pistol fire, slice them with a giant scythe and then mutilate the remains with a huge fiery axe. Maybe I’m underselling it, but suffice to say it’s a pretty goddamn fun ride.

As always, each stage ranks your performance based on how fast you clear it, how many assist items you used and how much style you implemented in your combat. Defeating enemies earns souls and tokens that buy power-ups, weapon perks and new moves to add to your arsenal. You’ll need every bit of upgrading you can get to keep with Mundus’ minions. Eventually, weapon switching won’t just be for show as higher-class demons can only take damage from specific types of attacks. A good example scenario is when the witch enemies come out to play. They generate a shield that can only be busted open by Angel weapons — crack open her shell, though, and she’ll go down easily with Devil attacks. Simple enough… until you encounter them paired with three other types of enemies with equally complex standards, forcing you to use both your brain and brawn.

One thing the series is known for is the harsh difficulty, but even with swarms of well-conceived enemy patterns, this one dials it down a notch on its default settings. Higher rankings are easier to pull off and enemies don’t show a fraction of the tenacity from previous games (well, really, it takes less off screen cheap shots at you than before). If you’re a series veteran you might want to jump to the Nephilim difficulty right off the bat for increased intensity. The challenge doesn’t end there as higher difficulties appear after completing the game with new patterns, twists and overall punishment. Your persistence doesn’t go unrewarded as you’ll eventually unlock boatloads of artwork and extras for your trouble.

The campaign moves at a brisk pace and can be put to bed in 8-to-10 hours — a slightly disappointing length that could’ve used a couple more boss encounters. On the plus side, the game doesn’t waste any time as every moment is packed with action or open for exploration. You’ll want to search high and low for upgrades as well as hidden doors and the keys to unlock them. These unlock quick challenges such as defeating a set number of enemies within a time limit or using only airborne attacks. Defeat these and you’ll get the real goodies that lead to a larger life bar and Devil Trigger gauge… items you’ll need to topple the higher difficulties as DmC is enjoyable and addictive enough to roll through at least a few play throughs.

Go ahead. Pout, grumble and moan in your corner, crossing your arms like a little brat that doesn’t want to eat their vegetables and pass up DmC: Devil May Cry. It’s only a wild romping dirty boot kick to the senses, plays like a silky smooth symphony of destruction and chaos and offers hours of replay despite a medium-sized campaign. Or you can come to the grown-ups’ table and actually enjoy a good game. Totally up to you.

By Jess Castro
Tags: Capcom
This entry was posted on Thursday, February 7th, 2013 at 2:15 pm and is filed under Jess Castro, Video Game Reviews. You can follow any responses to this entry through the RSS 2.0 feed. Both comments and pings are currently closed.