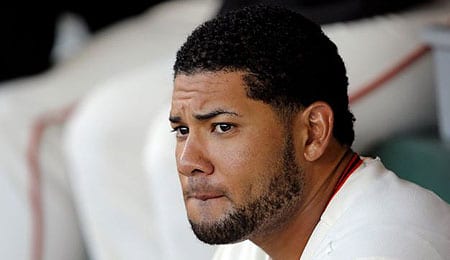 Melky Cabrera is front and centre in the latest PED scandal.

Isn’t it great that were now into the post-‘roids era, a time in which we no longer have to question every single noteworthy endeavour through the skeptical lens of wondering whether the act was boosted by artificial means?

PEDs are once again front and centre, first with a wave of suspensions (Freddy Galvis, Melky Cabrera, Bartolo Colon, Yasmani Grandal and Carlos Ruiz among others) and now with a report from the Miami New Times that suggests that the records from an anti-aging clinic in Miami detail the intake of PEDS by several notable players including Alex Rodriguez, Cabrera and Gio Gonzalez.

The Biogenesis of America clinic, which closed in January, was headed by Anthony Bosch, a man with connections to Manny Ramirez when he was caught using PEDs in 2009.

So many questions emerge from this latest scandal: for starters, is A-Rod done in Pinstripes after this latest episode? The fallout will be fascinating to watch.

He admitted to using steroids between 2001 and 2003. but said he hasn’t juiced since. The records from this clinic suggest otherwise, according to the Times report.

Rodriguez is already expected to miss a good chunk of 2013 (possibly all of it) in the wake of hip surgery. Now he has to deal with this. We think it might be time for A-Roid to find a hole to crawl into.

Cabrera, meanwhile, was already suspended in August, and now we have to wonder if his new $16 million deal with the Jays is in jeopardy.

Nelson Cruz, who has never been connected to PEDs, also showed up in the records, so keeper league owners better pay attention here.

Gonzalez, another newcomer to the PED spotlight, would also sink a lot of Fantasy hopes should it be proved he was juicing and he gets a suspension.

Grandal also showed up in these records.

What a freaking shit show this is. We’re going to be hearing a lot about this hot mess over the next few months.
Good times!

Just think: we don’t have a Hall of Fame inductee this year because the steroids era players were all on the docket. Could this be the start of a black hole in HoF inductions for years to come?

By RotoRob
This entry was posted on Tuesday, January 29th, 2013 at 12:50 pm and is filed under BASEBALL, MLB Today, Performance enhancing drugs, RotoRob. You can follow any responses to this entry through the RSS 2.0 feed. You can skip to the end and leave a response. Pinging is currently not allowed.