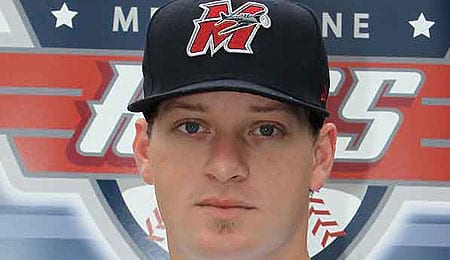 Brad Harman hasn’t given up on his dream of making it back to the bigs.

Former Philadelphia Phillies infield prospect Brad Harman is still hoping to get another taste of the Show, over four years since he last appeared in a big league game.

The Australian slugger has definitely had his ups and downs, but he popped back onto the radar when he was instrumental in leading Team Australia to a 6-4 win over the World All-Stars in the second Australian League All-Star Game.

Harman hopes his 2-for-4 performance, which included a double, homer and four RBI, will help earn him a shot at a regular slot in the World Baseball Classic in March. And if that goes well, who knows? Maybe the second baseman will get another sniff at organized ball.

Now 27, Harman set the Australian Baseball League’s single-season home run record in 2011 when he bashed 15 long balls in 34 games for the Melbourne Aces.

Not too shabby for a dude who was unable to play in the league’s inaugural season in 2010 because he earned a 14-month suspension from The Australian Sports Anti-Doping Authority because of going offside on the “whereabouts rule” that requires athletes to regularly update details about their location. Apparently, there were never any allegations of doping (see editor’s note, below).

He got his first and only chance in the bigs in April 2008, when he was recalled from Double-A with Jimmy Rollins on the DL. Harmon didn’t exactly light it up in the majors, going 1-for-10 with a double and a run in six games, but what did you expect from a 22-year-old kid who had barely seen any action above Class-A?

Signed as an undrafted free agent by the Phillies in 2003, he was considered a top prospect for them as recently as 2006 and he enjoyed a really fine season at High-A in 2007 before fading at Double-A the following two seasons. At the end of 2009, Harman was removed from the 40-man roster after hitting just .201 at Double-A.

He’s seen plenty of International action, having played for Australia in the WBC in 2006 and 2009 and also seeing action in the 2009 World Cup.

Power is Harman’s calling card, but he’ll need to become a better contact hitter if he’s ever going to get another crack at the majors.

[Editor’s note: This article originally — and erroneously — suggested that Harman’s suspension was because he was caught doping. This was an inaccurate statement and we apologize for this error and thank those who helped us set the record straight.]

By RotoRob
This entry was posted on Tuesday, December 25th, 2012 at 11:27 am and is filed under Australian Baseball League, BASEBALL, Player profile, Prospects, RotoRob. You can follow any responses to this entry through the RSS 2.0 feed. Both comments and pings are currently closed.