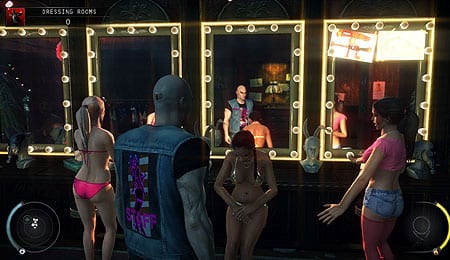 It has been a long time since gamers have been invited to don Agent 47’s signature suit and dual wield his Silverballers. In fact, more than six years have passed since Hitman: Blood Money snuck its way onto Xbox 360 and PlayStation 3. Turns out IO Interactive and Square-Enix have been busy during that down time, working on Hitman: Absolution, a game that instantly entrenches itself as the best in the series.

Moving stealthily from cover to cover is paramount to success for Agent 47, and for the most part the game is equal to the task. Snapping in and out of cover is done with a single button press, as is moving quickly from one piece to another. Shooting is smooth as well, though the auto-aim always places the crosshairs centre mass, which can be a bit annoying when squaring off against armoured foes. Of course, you can always disable it and rely on your own reflexes exclusively.

To simulate Agent 47’s exceptional training you are equipped with “instinct.” Holding down the right bumper allows you to enjoy an X-ray view of the surroundings complete with trails of fire that show the paths characters will walk. You can use finite amounts of instinct to blend when in disguise or essentially pause time and target multiple targets for some bad ass kill shots. The meter can be refilled by taking down foes naturally (read: without the use of instinct).

While most of the basics work well, Hitman: Absolution does suffer from contextual prompts that don’t always show up when you want them to. For example, there were times when I was right behind a guard, but the command prompt to choke him wouldn’t pop. Given how important stealth is and how far apart checkpoints can be, those kinds of issues are rather frustrating.

Working within some fairly enclosed locations, Hitman: Absolution is free to add lots of crisp detail work to impressive effect. Whether it’s the mansion that opens the missions, a small South Dakota town or a dilapidated mill, things look very sharp. More importantly in this circumstance is that the areas are smartly designed, offering lots of alternate routes to allow for divergent mission approaches. There’s a weird, ragdoll lifelessness to the bodies being dragged that makes it unintentionally comedic, but as long as you don’t dwell on their faces it won’t become distracting.

Voice acting fluctuates between pretty good and a little hokey, depending on which of the game’s characters are on screen. Agent 47 and Benjamin Travis are the best, but the likes of Birdie, Blake Dexter and his son Lenny can come across as caricatures. The highlight of the audio side is definitely the gunfire, however, as each gun sounds distinctive and packs impact (particularly the assault rifles).

Right from the get go things are personal for Agent 47, who has been dispatched to kill his long-time handler Diana Burnwood after she sabotaged the International Contract Agency, taking with her a young girl named Victoria. After carrying out the hit, a dying Burnwood implores 47 to keep the girl safe, which comes at the cost of loyalty to the Agency. It’s trying to fulfill Burnwood’s dying wish that provides the impetus for the story.

In terms of character development and story progression, Hitman: Absolution is nothing special. At best the game makes your enemies odious enough that you feel compelled to see that their lives come to an abrupt end as soon as possible. Still, the whole point of the game is to drop you into the shoes of a highly trained assassin who’s never in too deep no matter the odds. And at that level the game succeeds much of the time.

There are a total of 20 chapters on offer, most of which feature multiple sections. Within each of those sections you are scored based on how professionally you carry out your assignment, which is almost always either reaching a point of advancement or taking out a target. Move carefully, avoid or neutralize threats quietly and leave little trace of your presence and you’ll score well. Go in guns blazing and you’ll find yourself posting some massively negative numbers.

Reaching certain point thresholds during these sections will unlock improved skills for 47, but to the game’s credit that’s pretty much the only carrot to approach things stealthily. Rather than telling you this is what you’re going to do, Hitman: Absolution asks you: what do you want to do? There are always various routes to reach your goal and numerous ways to kill a target. The game even offers up a list of challenges for each chapter that require multiple (and varied) visits to accomplish.

However, while everything is conceptually solid, things don’t always come together as smoothly as you would like. By far the most annoying aspect is how easily enemies see through your disguise. I get that the game is trying to create a rock-paper-scissors effect where dressing as, for instance, a janitor makes you inconspicuous to guards and maids but vulnerable to identification by other janitors. Still, it’s far too finicky, especially when your disguise covers most of you but you’re still pegged as suspicious in a matter of moments from considerable distance.

This phenomenon also becomes doubly annoying at times because the game is rather stingy (not to mention inconsistent) with its checkpoint system. Lower difficulty settings offer additional checkpoints that you can activate, but even then your progress can be reset quite a bit — and in a game that’s based around deliberate action and waiting for openings, that can get irritating in short order.

Despite those issues, the Absolution campaign is an enjoyable one that really does a strong job of accommodating whatever style of play you choose. You can expect completion to take roughly 10 hours, though this is very much a game where your mileage may vary since aggressive tactics can push you through more quickly, albeit with a lower score.

On the multiplayer side we have Contracts mode. Here you’re tasked with completing specific hits that are built by the Hitman community from the existing single-player missions. To create a contract you simply load the map, mark the targets and take them out (that is to say you have to be able to execute the hit yourself before challenging others to do it as well). You can also fine tune the contract by tacking on conditions such as using a specific weapon or wearing a particular disguise.

As with any user-created content the depth of effort runs the gamut from painfully simple — with hits that can be completed in less than 30 seconds — to suitably complex. The best contracts are featured, and there are some very well designed ones available. Successfully completing any online contract earns you money, which can then be used for upgrades. It’s solid, but make no mistake: this is a campaign-centric experience.

There aren’t a lot of titles on the market like Hitman: Absolution, which helps it stand out both for its slow pace and multitude of options when it comes to accomplishing the goal. It has a few annoying issues, but those looking for something outside of the run-and-gun sect of shooters should take a look.

By Herija Green
This entry was posted on Wednesday, December 19th, 2012 at 11:20 am and is filed under Herija Green, Video Game Reviews. You can follow any responses to this entry through the RSS 2.0 feed. Both comments and pings are currently closed.