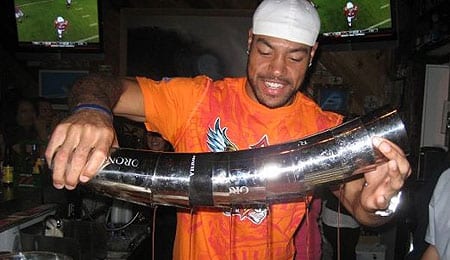 Vincent Jackson has err… shown good hands for the Bucs this year.

[Editor’s note: this is the RotoRob.com debut article of Mike Jones.]

It’s all come down to this – Week 16 of your Fantasy football season, or what’s more affectionately known as “the championship finals.”

We’d like to start off by congratulating you and wish you good luck, as whoever your opponent is, they are likely just as savvy and as lucky as you’ve been all season long.

What has plagued Fantasy owners since the dawn of the game is the vexing question: do you play your players based on matchups or do you play who you’ve relied on week after week. Are you loyal to your digital warriors, battling it out for Fantasy supremacy, or do you make last minute waiver wire pickups (such as David Wilson) and hope that they can win you a spot start?

Complacency or Loyalty? How do you view it?

Unfortunately there is no right or wrong answer, but we have this to say: if you drafted one of your players in the top three or four rounds and happen to be fortunate enough to be in the championship finals, you better play those players as they’re the ones responsible to get you this far. These are what’s known as “must-start players,” and no matter what the situation is, you have to play them, even if they’re injury riddled or facing a tough matchup.

The following players are just some of your “must-starts” that you have to play in Week 16.

Tom Brady, QB, New England Patriots: You know who he is. You know what he can do. No need to expand much further. You likely drafted Tommy in the first round and here comes the payoff. He’s motivated after Sunday’s loss and is facing the woeful Jacksonville Jaguars to boot.

Vincent Jackson, WR, Tampa Bay Buccaneers: Jackson has completely rejuvenated his career in Tampa and is likely responsible for bringing you to the Promised Land. He’s set a career high in yardage (1,226 yards) to go along with eight touchdowns, one shy of matching his career high, set most recently last year. Jackson is facing St. Louis, which is known for having a stingy secondary. The Rams have given up the eighth fewest Fantasy points to wide receivers, but Vinny just can’t be denied. He is arguably one of the most consistent Fantasy wide receivers this season.

Alfred Morris, RB, Washington Redskins: This rookie is unstoppable regardless of who he is facing or who is playing on his own squad. With his QB out of the lineup in Week 15, Morris stepped up and punched in two touchdowns, going over 20 Fantasy points for the week. If you had the presence of mind (or the luck) to pick up Morris early on in the season then you truly deserve to win the championship. Start him regardless of any other factor. It’s a no brainer.

Seattle Seahawks Defense: No, Seattle’s opponent this week — the San Francisco 49ers — are not the Arizona Cardinals, nor are they the Buffalo Bills. But the stats are undeniable. No team defense has put up more points in the last two weeks than the Seahawks. They are a turnover machine and are only gaining momentum into the playoffs. There may be better matchups out there, but 57 combined Fantasy points from your defense in two weeks is pretty much unheard of in all Fantasy football formats. Don’t worry about the 49ers; just play Seattle’s D and thank us later.

Mike Jones has been writing about Fantasy sports ever since he began competing years ago. His passion for sports gave him the competitive edge he needed to win weekly Fantasy sports competitions in football and basketball, which jump started his sports writing career. After years of following and writing for local sports he now focuses his attention on Fantasy sports leagues of all kinds, and his knowledge can help you win your leagues too.

By Mike Jones
This entry was posted on Thursday, December 20th, 2012 at 11:39 am and is filed under FOOTBALL, Mike Jones. You can follow any responses to this entry through the RSS 2.0 feed. Both comments and pings are currently closed.