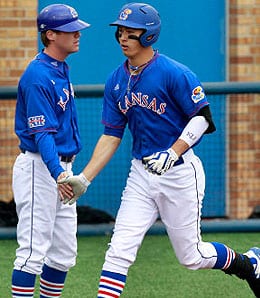 Connor McKay (right) has power potential for the Jayhawks.

The University of Kansas Jayhawks’ baseball team launched its eight-day tour of the Dominican Republic Sunday morning with a 6-5 win over the Kansas City Royals Dominican Academy.

The Jayhawks will play eight games in eight days against the Royals, the Indians and local amateur teams while also providing community service to the needy.

Connor McKay, who struggled as a freshman this year, had a big opening game, smacking a pair of hits and scoring twice, including the game-winning run in the top of the ninth on a passed ball as KU pulled off the comeback win.

KU was down 5-0 before scoring a half dozen runs over the last two innings – five in the eighth — for the win.

McKay was mostly a starter in the outfield this year, but he barely hit over the Mendoza Line with five homers and 20 RBI in 43 games (41 starts). He was drafted by the Rockies in the 24th round last year out of high school, but opted to go to college. McKay is athletically built and can run a 40-yard dash in 4.6 seconds, fast for a kid his size (6’4″, 190). He`s got a nice arm and power potential down the road, so it will be interesting to see how he fares over the next two years before being draft eligible again in 2014.

McKay was stuck at 0-for-3 before uncorking a one-out triple in the eighth, the team’s first extra-base hit of the game. His bunt single in the ninth launched the winning rally.

Infielder Jordan Dreiling had a single in the eighth to bring the tying run across the plate. He’ll be entering his senior season in 2013, but is not a prospect. The local product is an exceptional student, however, appearing on both the Athletic Director’s and the Big 12 Honor Roll in 2010. In 45 games this year, Dreiling hit .301 with five doubles.

Jayhawk starter Wes Benjamin was burned for five runs in four innings before getting bailed out by his bullpen and offense. He was a 48th round pick by the Yankees last year out of an Illinois high school, but he was not offered a contract. As a freshman, Benjamin won five of 15 starts, recording a 3.54 ERA and being named to the Big 12 All-Newcomer Team. The southpaw, who has a 91 mph fastball, is still a long shot to make it to the majors.

On Sunday afternoon, the Jayhawks exploded for seven runs in the seventh inning en route to an 8-4 win over Yuli Poso.

By RotoRob
This entry was posted on Monday, December 17th, 2012 at 4:24 pm and is filed under BASEBALL, College sports, RotoRob. You can follow any responses to this entry through the RSS 2.0 feed. Both comments and pings are currently closed.