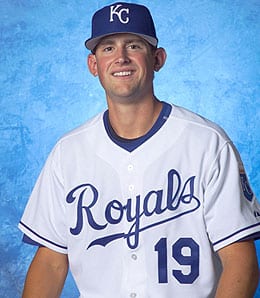 Luke Hochevar is running out of leeway.

Back in 2006, Luke Hochevar was the top overall pick in the draft. Once we can get past that and all the lofty expectations such a designation brings (and therefore the obvious disappointment of his career to date), we can begin to evaluate this Royals’ starting pitcher on a more objective basis.

Hochevar actually wasn’t totally awful in April, flashing decent hit rates and not giving up a single home run, yet some bad luck has his ERA scraping 5.00 at the end of the season’s first month.

It was a disappointing start to the campaign considering he had shown overall progress in 2011 and had really sparkled in the second half, making him somewhat of a sleeper for 2012. That sentiment built over a nice spring performance, when Hochevar flashed tremendous command and essentially looked capable of being the Royals’ “ace.”

That proved to be a moot point in May, when the walks and runs piled up and he endured a horrid 7.04 ERA.

It’s not as if he was horrible in the first two months of the season; it’s just that the shellings he took overshadowed his quality starts. It got to the point that by early May, he could not be used for Fantasy purposes and there was talk he would be removed from the rotation.

Yes, Hochevar occasionally looked like a stud, but really could not be used in mixed leagues because of his inconsistency.

In June, however, he got his hit rates under control and started to look useful again in formats outside of AL-only leagues.

In fact, at the beginning of July, we recommended Hochevar as a waiver wire pickup based on his control improvements and run of quality starts in June.

Okay, so this wasn’t our best call of year. Hochevar was way too hittable in five July starts before really trimming his ERA in his five August outings. But then the pendulum completely swung in the other direction when he actually surrendered more runs than innings in September. Serenity now!

Overall, Hochevar’s season was a major disappointment after he teased us a bit in 2011. His inning count was way down as he was getting pulled earlier in his starts and you can easily make the case it was his worst overall season yet. Ugh.

He was tougher to steal bases against, so that’s something, but why bother stealing when you can just sit back and wait to go yard? Hochevar’s flyball rate was never higher and thanks to a higher HR/FB rate, he surrendered a career high 27 dingers.

Hochevar was equally crappy at home and on the road, so even a change of scenery would not necessarily offer relief. He was not good before the break, but even worse afterwards.

While he was at his best with runners in scoring position and two outs, if there were less than two outs and runners were in scoring position, look out. This contributed to yet another lousy strand rate for Hochevar this year, his worst since 2009. If it wasn’t for bad luck, he’d have no luck at all.

An inflated BABIP of .315 is yet another sign of being snakebitten.

Hochever’s early season results suggested he was pitching better than the numbers indicated and sure enough, he did look better in June. But there is no way to sugarcoat his finish.

In looking at his pitch selection, there wasn’t a ton of difference in what Hochevar did this year. He used his curve more than ever, mostly at the expense of his cutter and change. His fastball and slider usage were pretty much consistent with what we saw in 2011. Considering Hochevar’s cutter was his most effective pitch this season, reducing his reliance on it was not the wisest call.

Still, to say he’s not capable of much better would be inaccurate. All the peripherals suggest as much.

We could easily seen Hochevar turning around and posting a career low in ERA next year. Then again, he might be so bad that he’s barely useful in AL-only leagues again. We’re better on the former, but hedging for the latter.

Of course, the larger questions are will Hochevar still be in KC and will he still have a rotation spot?

There were many Royals’ observers who were not only surprised but also a bit disappointed that the team opted to tender him a contract.

Still, KC would love to move some salary in a deal, and Hochevar is one of the players it would like to peddle.

Assuming the Royals can’t find a taker (and really, who would take him?), Hochevar should have a rotation spot in 2013 (although that’s not a given by any means). However, if he gets off to another start like he did this year, KC will not be as patient, especially considering it has added James Shields, Ervin Santana and Wade Davis.

The Royals also re-signed Jeremy Guthrie (inexplicably, for three years and big money), so he’s guaranteed a slot. Bruce Chen is still in the mix as well (likely as the long man) — not to mention Danny Duffy and Felipe Paulino battling back from Tommy John surgery at some point next year — so the fact is if Hochevar struggles any more, he’s done.

Manager Net Yost has expressed optimism in Hochevar’s ability to bounce back, but so what? KC has pitching depth now, so there is no need for it to remain patient, regardless of Hochevar’s status as a former No. 1 overall pick.

By RotoRob
This entry was posted on Sunday, December 16th, 2012 at 1:53 pm and is filed under BASEBALL, Player profile, RotoRob. You can follow any responses to this entry through the RSS 2.0 feed. Both comments and pings are currently closed.