Sports and The Simpsons 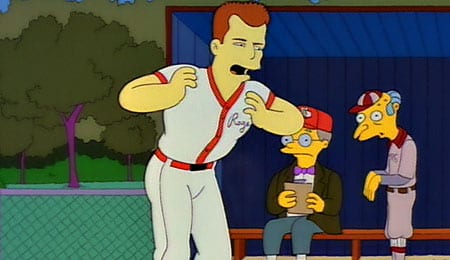 Roger Clemens believed he was a chicken on The Simpsons.

Leave it to SI Kids to come up with an awesome list of the 51 sports figures who have appeared on The Simpsons over the years.

Of course, the softball game episode from Season Three, featuring the likes of Roger Clemens, Don Mattingly and Jose Canseco, remains the single greatest sports episode that ever appeared on the show, for our money at any rate. In fact, it rates right up there among the best work in general from 24 seasons (!) of The Simpson. What’s your favourite Simpsons/athlete moment?

We never got an opportunity to wave goodbye to Dontrelle Willis, who retired in early July, but was only recently released from the Orioles, reminding us that we were tardy in providing an update.

You may recall that The D-Train signed a one-year deal with the Phillies in mid-December with the expectation that he’d emerge as the lefty specialist in the bullpen.

Well, things didn’t work out that way as Willis, dealing with a dead arm, was shelled so badly in Spring Training that the Phils had to cut bait before the season began.

A couple of teams looked at him, but it was Baltimore that took the plunge, penning Willis to a minor league deal just a few days after he was jettisoned by Philadelphia.

The O’s were also looking at him as a lefty specialist, but decided he needed time in Triple-A before he would be ready to get major league hitters out. Willis was touched up early and, nearly immediately he suffered a forearm injury that landed him on the minor league disabled list.

Then he was suddenly unhappy that he was relieving instead of starting, and that landed him on the restricted list at Triple-A Norfolk after he just left the team without permission. This led to a formal grievance by Willis against the Orioles, but he dropped that once the organization acquiesced and allowed him to work as a starting pitcher.

Of course, it took Willis a while to stretch out to get ready to start again, but when he finally started for Triple-A in late-June, he was shelled. A couple of days later, Willis stuck a fork in his career at the age of 30.

It seems strange to us that he would battle so hard for another chance to start only to throw in the towel after one bad outing.

So what kind of legacy did Willis left behind?

Well, Willis had the ultimate dream rookie season in 2003, earning a trip to the All-Star Game, winning ROY honours and helping the Marlins win the World Series. He was again an All-Star in 2005 when he won a career high 22 games, but things got progressively worse after that.

In 2006, Willis was a .500 pitcher with a declining strikeout rate. The following season, he went 10-15 as his innings count kept dipping. Willis won all of four games in the bigs over the next four seasons.

C’est la vie. The D-Train has left the station and isn’t likely to ever return, leaving us with nothing but memories of the mania he stirred up when he first landed in the bigs nearly a decade ago.

By RotoRob
This entry was posted on Tuesday, November 13th, 2012 at 11:15 am and is filed under BASEBALL, RotoRob. You can follow any responses to this entry through the RSS 2.0 feed. Both comments and pings are currently closed.