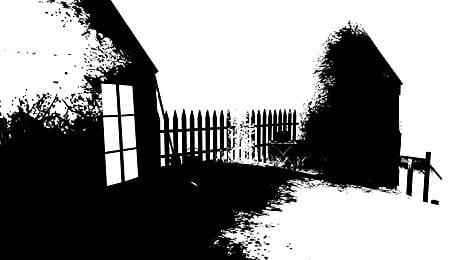 During gameplay, your screen goes from total white to stained ink.

The Unfinished Swan has generated buzz since early previews showcased its unique art style and gameplay. Now that it’s out, it’s clear that this indie PSN game was equal parts art project, child’s storybook, and game experience. As the young child Monroe, you’re sucked into another world chasing the eponymous swan from your mother’s painting. To say anymore would be a disservice to both the story and the experience of The Unfinished Swan.

The Unfinished Swan uses a first-person perspective, though its controls aren’t nearly as refined as you’d get out of AAA first-person titles. Only two actions are available in addition to left-analog movement — jumping and lobbing ink blobs. Ink blobs correspond to every button but the jump button, so you’re left doing whatever feels comfortable as you explore the world.

As this is an indie game based mostly on storytelling and puzzle-solving, it’s understandable that the first-person movement is good, not great. There are times when loose jumping might get you in trouble, though you’re never too stuck behind.

To say that The Unfinished Swan is a unique visual experience is an understatement. As you fire ink blobs into the world, geometric details form, all while the ink realistically drips down the environment. (Further variations on this arrive later in the game but I don’t want to spoil the game’s sense of discovery.) In between, you’re treated to storybook visuals very reminiscent of Shel Silverstein’s Where the Sidewalk Ends. It’s all very distinct, and while it won’t push the PS3’s graphical prowess like Uncharted 3, there’s no doubt that the game succeeds at its visual target.

The game doesn’t come with many sound effects other than ambient noise but its soundtrack has already been recognized as one of the year’s best. Unique compositions both fit and fill out the storybook world, keeping the tone relaxed yet inquisitive the whole time.

It’s kind of difficult to say whether or not you should play The Unfinished Swan, as it’s ultimately more of an experience than a game. Sure, there’s exploration and some light puzzle-solving in its relatively short time span, but there’s a greater sense of discovery rather than achievement or victory. That may frustrate some gamers, and that’s ultimately why The Unfinished Swan is not for everyone.

However, for those who are willing to go with something more experimental by design, The Unfinished Swan can be quite rewarding. Its unique gameplay setup is probably the closest you’ll get to experiencing how a blind person interprets the world through little bits of tactile information — or in the game’s case, small environmental revelations based on lobbing ink at the world. It’s hard not to get sucked into the story, whose tone walks the same line that the best storybooks do: written for a child, but nuanced enough for an adult.

So much of the game is about discovery that I don’t really want to explain too much about it. The Unfinished Swan is more than the sum of its parts (exquisite art, beautiful soundtrack, unique gameplay, clunky controls). Its childlike tone and exploratory pacing will turn off a number of more traditional gamers, but for those who take the plunge, there’s much to enjoy.

By Mike Chen
This entry was posted on Sunday, November 4th, 2012 at 9:12 am and is filed under Mike Chen, Video Game Reviews. You can follow any responses to this entry through the RSS 2.0 feed. Responses are currently closed, but you can trackback from your own site.