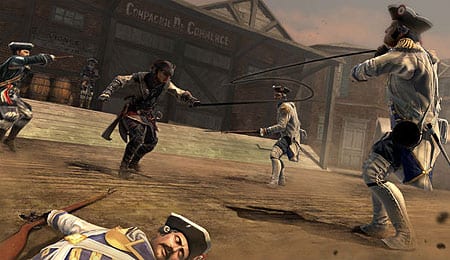 If four soldiers come along, you must whip ’em! Whip ’em good!

After some lean months, the release schedule for the PlayStation Vita has heated up considerably of late with multiple releases most weeks. Of all those titles, perhaps none was more eagerly anticipated than Ubisoft’s Assassin’s Creed III: Liberation. It isn’t the first triple-A series to appear to the handheld, but it’s the biggest third-party game on the system to date and, as such, carries with it some high expectations. Now the question is, can it meet (or even exceed) them?

As long as Liberation stays grounded in the traditional Assassin’s Creed actions — fighting, climbing and free running — the game handles quite well. The smaller Vita screen can occasionally be problematic when it comes to combat, but generally speaking it’s a solid translation. Where the controls do become an issue is with some of Ubisoft’s efforts to implement the console-specific functionality.

Seated atop the list is the use of the Vita’s rear camera. Periodically you’ll be asked to point the lens at a “bright light” and then rotate an object on the touch screen to reveal a hidden location, which will then move the story forward. It’s absolutely broken. I took my Vita outside and pointed the rear camera at the sun (THE SUN!) and it didn’t register as a bright enough object. Eventually I found that if I moved the Vita around for a while something would trigger the event and I’d be able to move forward.

There are also several other gimmicks in play, ranging from competent (pick pocketing via a swipe of the rear touch pad) to “I’m five seconds from throwing my $300 handheld across the room” (puzzle solving with the infuriating tilt controls). At a conceptual level I understand the temptation to utilize all of the system’s unique features, but Liberation, like Uncharted: Golden Abyss before it, serves as a reminder that more doesn’t always equate to better.

Several big time franchises have made the move from console to the Vita, but I’m not sure any of them retained their overall aesthetic better than Assassin’s Creed III: Liberation. Each of the game’s diverse environments pop with colour and detail, and the inclusion of animals and people going about their business helps give it a reasonably lived in feel. Animation is also smooth when scrambling up walls or countering your opponents’ clumsy attacks.

There is a price to be paid, however, in the form of an inconsistent frame rate that will dip when challenged. The camera can get stuck behind objects as well, which makes countering enemy attacks all but impossible until you can reposition yourself.

Moving the series from Europe to New Orleans means a whole new set of accents, and with a couple notable exceptions the characters are well voiced. The soundtrack isn’t exceptional — it does an adequate job of matching the action, but it can get repetitive during extended play. There’s a lot of ambient noise in Liberation, and outside of the panicked screams following an assassination (they seem to just go on interminably) it’s a quality effort.

Set in New Orleans during the mid-to-latter portion of the 18th century, Assassin’s Creed III: Liberation tells the tale of a female assassin named Aveline. She’s the daughter of a wealthy white business man and a former slave, who disappears after being freed by the father. Her unique cultural mix allows her to function as both a member of high society as well as passing for a slave. This helps her blend in and makes her ideally suited to investigate yet another Templar plot in their ongoing war with the brotherhood of assassins.

In Liberation you are free to switch between three roles: Lady, Slave and Assassin. Each one has its own unique strengths and weaknesses to create something of a rock-paper-scissors approach. The lady can walk freely, charm certain men and offer bribes to enter restricted areas. However, she cannot climb and has a limited number of weapons at her disposal. The slave can blend in but gains notoriety easily, while the assassin creates a constant level of suspicion.

These roles offer some flexibility in how you handle certain sequences, though the goal remains to put your target in the ground. As you carry out activities, each guise accumulates notoriety, which makes it harder to move freely through the area. Like previous AC titles, you can lower your profile by ripping down posters, killing witnesses or bribing magistrates — the difference here is that each persona is only affected by one type of action. For example, removing wanted posters helps make the slave anonymous.

Classic AC gameplay returns as well as you’ll spend a great deal of time climbing or free running to move from Point A to Point B, and when you enter combat the counter system will be instantly familiar to anyone that’s played other games in the series. As noted earlier, Liberation does add moments designed to work with the Vita’s functionality, but they’re little more than nuisances when compared to the game’s core action.

While Liberation does retain the “feel” of an Assassin’s Creed game, the narrative is scaled back. This is almost certainly a concession to the portable format as a convoluted story could be difficult to follow over a multitude of short sessions, but the title suffers for it. This is especially true toward the end when the final few sequences seemed like they were rushing you to the finish line. You’ll still get 10-plus hours of gameplay for your money — just don’t expect the story to stay with you.

As with its predecessors, Liberation offers plenty of non-essential activities to tack on some additional play time. There are side missions to undertake, collectibles to find and even a import/export shipping company to run for profit. Earned funds can then be used to buy more ships and raw materials or more traditional items like deadlier weapons, bigger pouches and different outfits.

Where the title does make a major departure from its console compatriots is with the multiplayer, which features an odd, strategy-based component where Abstergo battles the assassins for control of nodes that represent various cities around the world. It’s not well explained and feels like an odd inclusion that I doubt will garner much long-term attention from gamers.

Ubisoft’s biggest accomplishment is that it created a portable Assassin’s Creed game that has a look and feel that is consistent with the series’ lineage. Liberation can be a little rough around the edges, but it’s still among the better games for the PlayStation Vita.

By Herija Green
This entry was posted on Friday, November 2nd, 2012 at 10:32 am and is filed under Herija Green, Video Game Reviews. You can follow any responses to this entry through the RSS 2.0 feed. Responses are currently closed, but you can trackback from your own site.