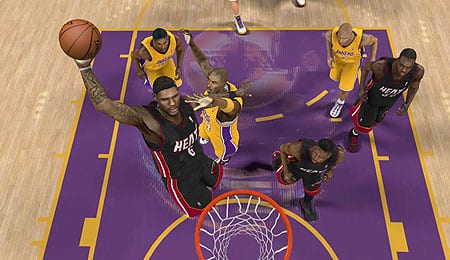 Is a Heat-Lakers Finals already etched in stone?

Another NBA season is almost upon us, and to celebrate we’re teaming up with 2k Sports to offer you the chance to win a copy of NBA 2k13, which we reviewed in full a couple of weeks ago, on either the Xbox 360 or PlayStation 3. Plus, as an added bonus, we’re including a code to download the All-Star Weekend DLC as well!

***Please Note: only residents of the United States and Canada are eligible to win this contest.***

Step 1: Post a comment below telling us which two teams you think are going to meet in the NBA Finals this season.

Along with your answer please include your console preference (Xbox 360 or PS3) and @Twitter handle if you have one. If you’re not on Twitter, simply verify that your email address is correct when posting.

Step 2: Twitter users can earn an additional entry by helping us spread the word via a retweet. Just RT the following: Win a copy of @2KGames’ NBA 2k13 from @VideoGamerRob on Xbox 360 or PS3! Details here: http://bit.ly/PgrD4w.

Winners will be selected at random on Monday, November 5. All entries must be submitted by 11:59 p.m. EST on Sunday, November 4. Please note that although anyone can enter you must either be following me on Twitter or submit a working email address to win.

By Herija Green
This entry was posted on Monday, October 29th, 2012 at 10:44 am and is filed under BASKETBALL, Contests, Herija Green, Video Game Reviews. You can follow any responses to this entry through the RSS 2.0 feed. Both comments and pings are currently closed.