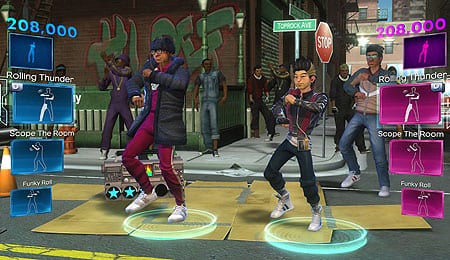 Enhance your experience by shouting “AW, DAT’S MY JAM, SON!” before every song starts.

Aight, b-boys and b-girls, it’s time to get your crunk on again! Harmonix delivers the latest installment of its benchmark Kinect dancing game series, Dance Central 3 — and I’m here to get stupid with it, yo! Will new jams, new dancers, new venues and new modes be enough to get gamers to pony up new dough? Or is this just really the same old song and dance? I’m gonna make myself sweat ’til I bleed to give you the answers, fool!

If you’ve played either of the previous titles, you know the drill. A song starts playing, a dancer starts dancing and you mirror their moves as closely as you can. A series of cue cards will cycle through to hint on which dance move to perform next; the higher the difficulty setting, the faster and more complex the dance moves get. As you nail each maneuver you’ll rack up points based on how accurately you perform them and how many you hit in a row. Busting a groove in your living room alone is sooo June 2010, so you know this game supports two dancers at a time like it should.

Body recognition is an all-around impressive feat pulled off in Dance Central 3. Trying to slouch or fake your way through moves won’t get you far in the scoreboards as the Kinect really struts its stuff when analyzing your moves. This is the goodness that has made the previous incarnations such a huge success. Simply put, it’s just so damn fun to cut loose with friends and family, regardless of skill set or dancing prowess, while still maintaining a competitive edge.

However, I did find this one to be a tad more critical on subtle movements than its predecessor. When it comes to obvious arm and leg movements, I knew when I was nailing or fudging it and the game judged me accordingly. But when it asked me to lightly shuffle my arms about, I’d hit patches of confusion and light frustration when I’d get penalized for missing such a seemingly easy move. You get over it as practice makes perfect and eventually, you learn how to hit all the routines correctly.

Dance Central 3 attempts to focus on musical diversity more than ever with 46 tracks that stretch from the ’70s to present. This groove-time odyssey isn’t just apparent in the sounds but the sights as well — there’s a nice set of venues appropriate for the eras such as a Soul Train-esque TV studio and an ’80s style urban break dance street corner with afros and hi-top fades to match. The models, animation and sound design are as hype as ever, demanding you pump up the volume and turn your living room into a dance club.

Even though DC 3 tries harder than ever to bring a wide variety of music to the table, the majority of tunes hail from the past decade. With the dancers and arenas sporting retro looks, I was really hoping for more ’70s and ’80s songs this time around, but more than half of the tracks hail from 2000 and up. For the most part, it’s a great set list and the choreography is pretty wild — except for “Macarena.” I really hate that song and I’d cast it into the sun to die a million fiery deaths if I could. Seriously, eff that crap.

The majority of the features from Dance Central 2 return with subtle improvements — more intuitive voice commands, a detailed Fitness mode and custom set list options. It’s still encouraged to practice the individual moves in Break It Down mode so your flow improves through repetition when playing the real deal. It’s all relatively familiar, but Dance Central 3 packs a few new tricks in its bag.

Being a little more in-depth than last year’s street crew campaign, the Story mode is a ridiculous time-traveling journey involving DCI (Dance Central Intelligence) Agents against a Dr. Tan, dance battling for the… oh, I don’t know… the fate of the dance world continuum or something? It’s appropriately silly and light-hearted, as well as it should be, proving to be a great way to explore what the game has to offer and unlock new costumes and venues. After all, I don’t think the world is ready for a dance game featuring a story mode that has real high stakes, like some twisted Saw movie gone wrong. (“Let’s play a game. Miss a move in ‘Da Butt’ and your nana gets dipped in a vat of rusty razors!”)

While that’s all fun and dandy, the best way to get top mileage from DC 3 is to invite some friends over and fire up the new Party mode, a non-stop shuffle that effortlessly keeps the dance going for hours. With simple voice commands you can easily skip a track (say, if “Macarena” pops up) and it saves you the trouble of assembling playlists if you want to just get down on it. However, if your company is ready for some serious trash talk, the new Crew Throwdown can pit two teams of up to four against each other to see who’s the illest. Not only will you simply dance against each other, you’ll get a couple of mini-games in the mix as well. Keep the Beat will throw a series of rhythmic poses to see who keeps up the best and Make Your Move allows you to do just that. Do an improvised funky move and your opponent will have to duplicate it, then vice versa.

Two years after the debut of the original, DC 3 is still a great deal of fun and proves to be the very definition of a “party game,” especially if you’ve never played it before. The DLC library is still going strong, and as before you can import the tracks from previous titles provided you have the original copy and US$5 per game. (If you’ve already imported DC 1, you’re already good to go!)

New modes aside, this is very much the same game as before. That’s not entirely bad as the set list of new songs is worth the price of admission alone. However, when compared to Harmonix’s other music juggernaut, Rock Band, the leap from one installment to the next doesn’t seem that large. There are hints that the party will still go in the future, but this dance crew will have to step up its game if it wants to continue to impress.

As the holiday season approaches, the Kinect should push a few more units off the shelf this year with a title as strong as Dance Central 3. It’s not the ultimate swan song to a music game genre like Rock Band 3 was, meaning there’s still room for innovation in future installments, but it’s easily the best of the series yet and continues to trump the competition in terms of technical gameplay.

By Jess Castro
This entry was posted on Sunday, October 28th, 2012 at 2:44 pm and is filed under Jess Castro, Video Game Reviews. You can follow any responses to this entry through the RSS 2.0 feed. Both comments and pings are currently closed.