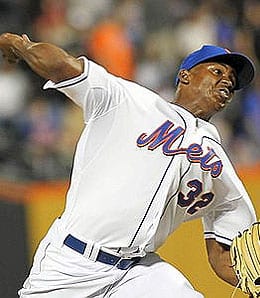 Jenrry Mejia could be a key bullpen member of the Mets in 2013.

New York Mets hurler Jenrry Mejia was our No. 39 prospect in 2011 before falling off the list this year in the wake of Tommy John surgery. So how has he fared this season in his efforts to land back on the Fantasy radar?

Well, Mejia managed to make it back this season after the injury limited him to five starts in 2011. He dominated in a couple of starts in the FSL, before getting touched up in a couple of Double-A outings. Mejia was finally promoted to Triple-A where he split his time starting and relieving, and the improved hit rates were definitely encouraging, but he struggled with his command – a common trait for pitchers working their way back from TJS.

Mejia was recalled to the Mets for five appearances (three starts) in September, but he was hit hard and the results were not good (although he did bag his first MLB win). In his two cups of coffee in New York so far, he’s struggled. However, we are talking about a kid who just turned 23 a couple of weeks ago and is still recovering from major surgery. There is major upside here.

Next year will tell the tale for Mejia as he’ll be in that all important second season back from Tommy John, the one in which pitchers usually return to their previous ways or continue to struggle and then ultimately fade away.

Mejia will continue to work on his craft in the Dominican Republic winter league starting next month. One of the most important things he’ll need to address is getting ahead of hitters early in the count.

The long-term prognosis is for him to be a reliever in the Show. We definitely know the Mets could use bullpen help – they were atrocious in this department this season. Expect him to bag a bullpen job for the Mets next season, with his Fantasy value being dictated by how responsible a role it is.

By RotoRob
This entry was posted on Thursday, October 25th, 2012 at 10:45 am and is filed under BASEBALL, Player profile, Prospects, RotoRob. You can follow any responses to this entry through the RSS 2.0 feed. Responses are currently closed, but you can trackback from your own site.