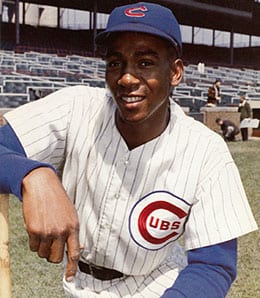 Ernie Banks did it all — except play in the playoffs.

When we previewed the starting pitcher ranks in a late-March Podcast we talked about how the tremendous spring performance of Mike Minor signalled that he was ready to take a big step forward this season.

Well, to say it was a seamless process would be a lie; it took a lot of work for Minor to evolve into one of the three starters the Braves trusted enough to put on the Wild Card game roster.

He did get off to a decent start, but May was so ugly (9.55 ERA, 10 homers allowed in 25 1/3 IP) that the young southpaw looked farther away from Fantasy relevance than ever before.

The recovery began in June, although he continued to struggle with his command. July, however, ushered in a massive turnaround and while Minor remained solid in August, it was his September work that was truly mind-blowing and likely helped plenty of Fantasy teams to glory: 4-0, 0.87 ERA, just one homer allowed and a phenomenal 28/9 K/BB ratio.

In his first full season in an MLB rotation, Minor made progress, even though his strikeout rate dipped significantly. His record wasn’t great, but he did manage to eke out a winning mark despite such a horrid opening couple of months. The big number for us? Minor’s WHIP dropped from 1.49 to 1.15. That’s serious progress, baby.

If not for that nasty start, Minor’s ERA would have been much, much better. But when you’re giving up 6.2 runs per nine innings heading into July, it’s a tough road to hoe. But hoe he did.

The dingers were a massive issue for him last season, but you can clearly see that this part of his game improved dramatically as the season progressed, so we’re not overly worried about a long-term problem for this flyball pitcher.

The simple fact is that in the span of three months, Minor has morphed from a pitcher who’s rotation spot was very much in jeopardy to one of two pitchers (the other being Kris Medlen) that is guaranteed a spot in Atlanta’s rotation in 2013. And the Braves remain a team with plenty of starting pitcher options.

Minor will again be a sleeper in 2013, but beware that his true value will lie a bit closer to what we saw in the first half — his second half showing was probably a tad unsustainable.

By RotoRob
This entry was posted on Monday, October 15th, 2012 at 12:13 pm and is filed under BASEBALL, Player profile, RotoRob. You can follow any responses to this entry through the RSS 2.0 feed. Both comments and pings are currently closed.