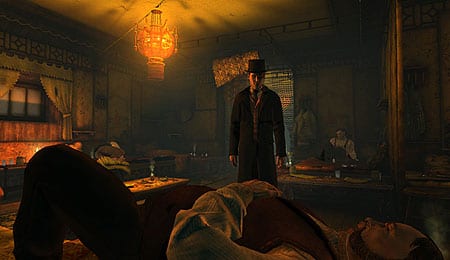 Turns out life in London circa 1898 pretty much sucked.

There has been an abnormally high level of interest in Sir Arthur Conan Doyle’s quick-witted detective over the past couple of years, including a pair of big-budget films and modern reboots both internationally (BBC’s Sherlock) and domestically (CBS’ Elementary). Into that relative renaissance comes Atlus’ The Testament of Sherlock Holmes, a sleuthing adventure that features a solid story amid some technical hiccups.

Investigation is the name of the game, which equates to lots of meticulously walking every available inch of an area and pressing a button when on-screen prompts (either a hand or a magnifying glass) pop up. If you’ve yet to see or do everything at a particular point they’ll be outlined in blue; once completed they turn green. It handles fine, though the persistent swaying in first-person view can occasionally make it difficult to investigate a particularly small object when zoomed in.

Moving around feels cumbersome, and it was common for characters to get stuck cycling through door-opening animations — thankfully these can be cancelled out of by pressing the “B” button. Invisible walls will sometimes halt your progress as well, and there were even times when my A.I. partner would trap me in a spot and force me to load a previous file. The lesson: save often.

Set in turn-of-the-20th-century London, The Testament of Sherlock Holmes features turn-of-the-21st-century visuals. Muddy textures and awkward character models, particularly with the world’s non-essential inhabitants, haunt the game’s ambiance from start to finish. Movement is slow, even when running, and everything on the graphical front feels last gen. There are also sections where the lighting is so poor that it’s difficult to see what you’re doing.

While not spectacular, the voice acting is quite good, particularly the voices of Sherlock Holmes and John Watson. When branching out into the peripheral characters it’s more hit or miss, lowlighted by Hans Schielman, whose German accent is cringe worthy. The soundtrack is very subdued and rarely builds beyond faint background fodder.

Outside of a brief tutorial that doubles as Holmes wrapping up a case involving a missing necklace, the entirety of the game surrounds an investigation into the murder of the Bishop of Knightsbridge, who meets a rather grisly end. The story is dark, well paced and has some very cool surprises along the way. That’s due in no small part to the subplot that frequently clouds Holmes’ true motives, leaving Watson to serve as the game’s moral compass.

As you’d suspect, the storyline sprawls considerably as the Bishop’s demise is the proverbial tip of the iceberg with Watson and Holmes following clues throughout London and beyond. As the investigation continues, Holmes’ past deeds are cast in a rather negative light by a local journalist. Are these merely baseless accusations? Or has Holmes’ uniquely-wired brain crossed over to the point that he’ll now willingly consort with the criminal element to get what he needs?

That the answers to these questions, not to mention the depth and scale of the case, aren’t readily apparent is what drives The Testament of Sherlock Holmes. Things build over the 10 or so hours you’ll spend searching for clues and partaking in a series of clever mini games where you’ll do things like analyze poisons, perform autopsies and solve various puzzles. If things get too difficult, the game does offer a “skip puzzle” feature that’ll complete it for you and allow you move on, though since finishing those investigations compromises the entirety of gameplay it should only be used as a last resort.

In addition to the puzzles, you’ll also need to rely on your ability to decipher what the clues you’ve found mean via the “deduction board.” Here bits of information about the case will be noted, and you’ll need to make the correct conclusions to advance the storyline. Once you’ve properly connected the dots, your deductions will turn green — there is no penalty for getting it wrong.

While all this can be cerebrally stimulating, The Testament of Sherlock Holmes has its fair share of drawbacks. Beyond the technical glitches already noted, there were times when cut scenes needed to move the story forward wouldn’t trigger — these necessitated loading past saves and repeating tasks, at which point the identical steps produced the desired result. The game’s hint system is also an all-or-nothing endeavour, either offering up no help whatsoever or essentially solving it for you.

Outside of a few choices of which location to go next, the game is incredibly linear, as the pieces fall into place at the same pace regardless of what you do. In many ways it feels more like an interactive story than a true video game, especially with a complete lack of action sequences. That linear approach where everything unfolds identically also leaves the game with no replay value. You play through it once to enjoy the story, but I can’t imagine someone going back again.

If you’re a fan of the fiction or enjoy a varied, puzzle-centric adventure, The Testament of Sherlock Holmes should keep you engaged throughout. Those that prefer some action will doubtless find the game tedious… and even the most ardent fan is unlikely to see it through a second time.

By Herija Green
This entry was posted on Wednesday, October 17th, 2012 at 2:23 pm and is filed under Herija Green, Video Game Reviews. You can follow any responses to this entry through the RSS 2.0 feed. Responses are currently closed, but you can trackback from your own site.