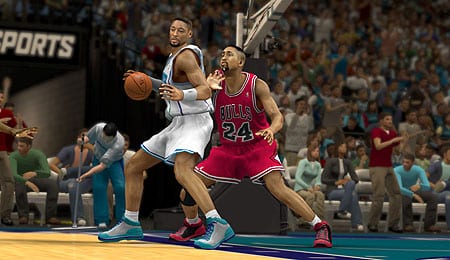 Ah, October. Is there a better time of year for sports fans? Given that you’ve got baseball playoffs, college and pro football, plus hockey (usually) and basketball gearing up I’m going with no. The arrival of another basketball season also means it’s time for NBA 2k13 to hit store shelves, which for years now has been a great thing for fans of virtual hoops. 2k Sports continues to innovate with its signature series, but were some things better left unchanged?

Perhaps the biggest single change from last year to this is switching all the dribbling moves to the right analog stick, and adding the left trigger as a modifier to use the stick for shooting. 2k Sports’ decision to consolidate the in-game action this way feels great and is a welcome change for anyone who struggled with the undeniably complex setup of past versions. The new scheme is responsive and makes pulling off moves such as crossovers and hesitation dribbles easier than ever — and for those that liked things the way they were, the previous controls are available as well.

Defensively, things don’t feel appreciably different. It’s still a challenge to keep a quality scorer in front of you as he unleashes a flurry of moves, but that pales in comparison to the nigh impossible task of chasing shooters through screens off the ball. There’s just a modicum of hesitation, maybe better labeled as “queuing,” that makes reacting to quick cuts and double moves harder than it should be. It also feels a little too difficult to fight through screens effectively.

Those playing on the Xbox 360 can now also take advantage of the Kinect’s vocal recognition to call out plays to A.I. teammates. It feels reasonably organic and is a more workable use of the peripheral than Madden NFL ’13’s pre-snap adjustments, which simply took too long to be a viable alternative. You’re not missing out with the PlayStation 3 version, but it’s at least worth trying a few times if you’re itching to use your Kinect.

At this point you should know what to expect out of NBA 2k13 graphically — it flows smoothly and does an excellent job of simulating the NBA broadcast experience. A new barrage of slickly produced pre-game introductory videos shows the influence of entertainment mogul Jay-Z, and the melding of hip-hop and highlight montages is really well done. You’ll see the occasional hiccup with animation transitions that fool the A.I. — a ball caught well below the rim called for goaltending, Steve Nash taking eight steps before dishing the rock without a travel call — but they’re rare enough not to affect anything.

There was a focus put on more dynamic, player-centric commentary for the MyCareer mode, which — while sound in theory — doesn’t come across particularly well. The announce team referenced post-game comments I never made, referred to my 14th NBA game as my first, lauded me for my three-point shooting prowess (I’m terrible at it) and a number of other missteps. Also, the sideline reporter recycled the same commentary about Jeremy Lin’s development being noticed by the opposing head coach in every single game until I replaced him in the starting lineup.

Repetition and factually ambiguous statements aside, the team of Kevin Harlan, Steve Kerr and Clark Kellogg remains the standard bearer for sports commentary. It’s great when they stop mid-thought to react to a big play or monster dunk as it really lends an authentic feel to the flow of the game. The soundtrack is loaded with plenty of hip-hop luminaries, though some of the tracks are so heavily edited for content it makes you wonder why they were included.

On the hardwood, NBA 2k13 performs better than its predecessors. At the heart of the game’s improvement is a refined passing system that has all but eliminated the unrealistic deflections and awkward animations that made kicking the rock in traffic a dangerous proposition. Now running the fast break is a rewarding experience, and if you take the time to set up the proper angle on feeds into the post you should have little trouble connecting with your big men. The ability to throw a bounce pass at will (hold down the left trigger when passing) also helps immeasurably.

Teammate A.I. has been ramped up as offenses don’t perpetually milk the clock or turn down open shot after open shot during MyCareer mode. Defenses cover up smartly for one another, even if there are times when it’s nearly impossible not to get lost when switching assignments as the arrow starts pointing in seemingly every direction at once. Rebounding A.I. feels modestly improved over previous versions as well, but it still seems like teams get second and third shots too often.

Cohesion appears to have been a focal point of the developers this time around, as MyPlayer is now an all-encompassing representation of your virtual self. From that in-game hub you can deck out your player with all types of signature animations, on- and off-the-court gear and accessories, and attribute boosts. Unfortunately, all that continuity comes with a price, as nearly every conceivable upgrade is now locked away behind the brand new Virtual Currency (VC).

It’s not the idea of VC that’s faulty, it’s the execution. Earning more than a couple hundred credits in a single, non-key game is difficult, and early on when you’re struggling to get much burn it’s a challenge to even hit triple digits. Where it gets frustrating is the cost of purchasing items — something as simple as an elbow pad will run you 800 VC; now take into account that my first contract as the 16th overall pick paid me 1,000 VC over two years (a cool 38 VC every two weeks) and it’s hard not to view its addition as more than thinly veiled “encouragement” to buy VC with real currency.

If you can get past the how (to be fair, the game doesn’t require you to purchase anything, and you could be content to grind it out) and concentrate on the what, NBA 2k13’s MyCareer mode is better than last year in almost every way. The grading system, while still too harsh when deducting for allowing your opposite number to score, is generally fairer and rewards heady play. All-new signature skills allow for even more specialization with unique abilities such as being a spot-up shooter, an exceptional distributor, a lockdown defender or many more.

There’s also a feature that gives the option to sit down with the General Manager to discuss a range of topics. Early on you won’t carry much clout and topics will be limited, but as you grow in ability and popularity, your voice will be heard. It’s a pretty cool feature that adds a little more RPG flavour to the mode. One area that did take a step back, however, is the drills. Now each drill offers an identical reward of VC with no immediate stat bumps; the result is that there’s no incentive to  branch out. Just pick the easiest one, get gold and collect your VC.

MyCareer not floating your boat? Not to worry. NBA 2k13 is loaded with other ways to spend your time, including the new MyTeam mode (think Madden Ultimate Team) and “Today” Association, which allows you to jump in at any point during the season and play a team’s games going forward with all previous real-life results in place. There’s also traditional Association and Online Association, plus an excellent selection of classic squads, including the 1992 Dream Team, for any aspiring basketball historians out there.

NBA 2k13 is a great game, and hoops aficionados should appreciate the improvements in both gameplay and teammate A.I., once again elevating an already established powerhouse.

By Herija Green
This entry was posted on Thursday, October 11th, 2012 at 1:02 pm and is filed under BASKETBALL, Herija Green, Video Game Reviews. You can follow any responses to this entry through the RSS 2.0 feed. Both comments and pings are currently closed.