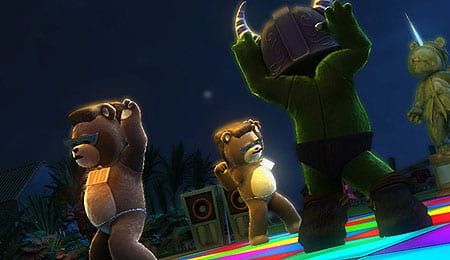 Not even dancing bears on vacation are safe from violent deaths.

If you’ve ever had psychotic ambitions but also a hidden agenda to be a Furry, then the Naughty Bear series is for you. And if you just wanted a laugh with the original Naughty Bear but found its huge range of bugs and quirks frustrating, then you’ll be pleased with Naughty Bear: Panic In Paradise. The sequel is a significant step forward from the original game, though it certainly has its frustrating moments.

Ready to kill some adorable fuzzy bears? Much of your initial violence stems from the face buttons — regular attack and heavy attack. All of these buttons can be used with whatever weapon you have, and if you want to just keep whacking away, you can. Be forewarned, though — they block a lot, which means you’ll be pressing attack buttons for a while without anything really happening.

There’s also a grab button, and that’s where things get a little more interesting. As your bludgeoned opponent staggers away, Naughty Bear can grab him, opening up the trigger button to execute kills. The length you can hold an opponent depends on your stamina, but drag him or her over to one of the many environmental objects (for example, a cactus) and your option becomes an object kill.

If your opponents are running away, Naughty Bear can run after them with the trigger button. However, all of the bears in Paradise Island seem to be Olympic sprinters because they run fast, and this is frustrating. To try to slow them down, you can summon shades of Skyrim by scaring them with a shout, though this offers limited effectiveness.

In short, the controls themselves aren’t bad — it’s the execution of how they’re implemented in the world that can be frustrating.

As a download-only game, it’s fair to say that Naughty Bear: Panic In Paradise wasn’t funded by the unlimited vaults of EA or Microsoft, so the budget appropriately reflects this. The bears look like, well, bears, though they’ve pulled back a little on the cartoony look of the original game. I have to think whoever did the motion capture for the game had a hell of a lot of fun, as there’s nothing quite like seeing a teddy bear murder another teddy bear by slamming a car door into its head.

Paradise Island is colourful, with a wide variety of locations and lovely random things that just happen to double as effective kill toys. Flowers, dance floors, cars, and BBQs add flavour and charm to the world, though there’s nothing here that comes close to reaching the graphical power of this generation.

While the graphics are only ho-hum, there’s something to be said about the game’s sound work. In particular, the bears’ Ewok-like voices are excellent at adding to the twisted humour, and the jovial narrator comes with full tongue-in-cheek attitude. Be warned, though — you’ll get tired of him on specific levels as you’re stuck restarting them over and over.

Naughty Bear: Panic In Paradise unfolds in a semi-open world, level-by-level basis. In each level, Naughty Bear is visiting some part of the island resort with a grudge to settle. With all sorts of everyday items available for mayhem — hacksaws, rakes, Venus fly traps, car doors — Naughty Bear is ready to deliver the pain in as creative a way as possible. As NPC bears (and ancilliary cute fuzzy animals) walk around, Naughty Bear has the opportunity to sneak up on them or sprint in and go for the kill — literally.

NPCs react with either fear or aggression; you can chase down fleeing enemies, though your limited stamina meter only allows you to sprint so far. If it gets violent, enemies can be beat down to the point of injury. They’ll start to hobble away, which means you can finish them off on the run or grab them for Mortal Kombat-style fatalities. That’s where the bulk of Naughty Bear’s fun is — the ridiculously over-the-top teddy bear murders. It’s not just your in-hand weapons that provide the kills; if you drag your enemy over to, say, a BBQ pit, you’ll get creative interactive kills.

You can play psychological warfare on your plush enemies, too; terrorize and torture them enough and you’ll cause them to commit suicide. Primary targets sometimes have to be killed in a creative manner, which often goes into “wow” levels of over-the-line humour (if you appreciate South Park-esque humour, you’ll get a kick out of this). The more you smash and kill, the more XP you get, which means you can purchase clothes and weapons for Naughty Bear. These power up different traits, along with giving Naughty Bear disguises to sneak around in.

It’s funny and ridiculous, and since each level has a main objective along with a number of secondary objectives, there’s plenty of replay value. Once you finish your objectives — or if you just want to try a different level, you can go to designated exit points to save your loot and XP; from there, you can move on to newly unlocked levels or revisit older ones. Unfortunately, I’m not sure you’d want to achieve all those secondary objectives.

At the heart of the game is combat, but the combat is extremely limited. I’m not expecting God Of War-style chain combos, but it’s essentially two different attack buttons, both of which can easily be blocked by enemies. Factor in poor collision detection and enemies ganging up on you, and Panic In Paradise soon becomes Exercise In Frustration. The variety of weapons is fun but only in the actual finishing move — the rest of it is pretty much just swinging away. Limited health items make it more irritating than challenging, particularly in the beginning.

Naughty Bear: Panic In Paradise is a funny but limited experience. If you wanted to show friends something for kicks, they’ll certainly get a laugh out of it. After that, though, it’s hard to see past the design flaws for sustained play, though there’s certainly enough depth for you to go at it if you want.

By Mike Chen
This entry was posted on Wednesday, October 10th, 2012 at 11:40 am and is filed under Mike Chen, Video Game Reviews. You can follow any responses to this entry through the RSS 2.0 feed. Responses are currently closed, but you can trackback from your own site.